Home Issue 4 Alice Plaza and the street: can we try a bit harder?
Issue 4Issue 5Volume 21

Alice Plaza and the street: can we try a bit harder?

Grease traps could allow a cafe go in this corner tenancy. Is there a solution?

Businesses opening their doors onto the street is a make or break situation for Todd Street North, with the most critical premises being the tenancies on the eastern side of Alice Plaza. Is everyone trying hard enough?

The Alice Springs News Online has learned that there was a proposal made by the Plaza to the Town Council to install grease traps on council land, that is outside the Plaza premises. Plaza property manager Tony Bowes says council’s response was ‘no-can-do”. 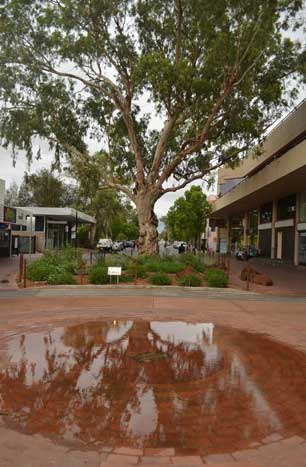 Council’s director of Technical Services, Greg Buxton, has confirmed that there was such a request to council. He says the proposal was for a 1500 litre grease arrester under the newly installed paving in the vicinity of the Rainwater Reflection Pan (pictured left after recent rains). He says it would be visible and would require monthly pumping out.

Mr Buxton says he wrote back suggesting that options for grease arresters inside the Plaza be investigated. And there they matter has stayed until our enquiries.

Mr Bowes says council did “NOT” write back, not to the “property manager” anyway. He says internal grease traps are not an option in “ANY” shopping centre. He says the grease trap proposed would be under ground, with “two Gatic covers flush with the path” and may only require being pumped out six monthly.

It is understandable that the area around the Rainwater Reflection Pan, in front of the Foundation Tree, not be disturbed. But what about Todd Street? Would some underground services there be a problem, even if their installation caused temporary inconvenience? That would surely be outweighed by the long-term benefits of a café opening onto the street, particularly one with some al fresco seating taking advantage of the handsome new street design and culturally enriched ambience.

Steve Thorne, a leading urban designer whom Alice Springs was lucky enough to have heading up the team in charge of the mall revitalization – a $5m public investment – has described what’s at stake in Todd Street North:

“The issue isn’t just about cars, but how to induce a more vibrant, safe and active northern part of the Todd Mall between Parsons Street and Wills Terrace. The proposal to open the mall to cars (it was half open already) can only work if shops open out onto the street. This point we have stressed throughout the consultation process.”