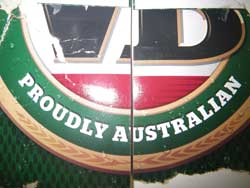 It’s official.  The NTG can justly issue car registration plates under the moniker ‘Drink Up!’, or perhaps more to the point, ‘What goes around, comes around’.

ABC NT (13/12/13) has reported new figures showing alcohol sales in the NT have increased, with the equivalent of six million cartons of full-strength beer sold in the past year.

A Minister of the NTG attempted to quash any solace we may have drawn from the Banned Drinkers Register which was launched in that period, but dismantled by his government before it was given a chance to prove effective.

In Tennant Creek, the latest figures reveal a 44% increase in assaults in a town where a local Aboriginal Corporation was given $250k by the NTG to come up with an Alcohol Management Plan (AMP).  The NT Opposition criticized the NTG for failing to cooperate with the organization.

The NT data and data by regional centres is available here:
http://www.dob.nt.gov.au/gambling-licensing/liquor/Pages/alcohol-data.aspx

AMP’s remind me of the story about the boy who stuck his finger in the dike to try and stop the sea from flooding a country that had built them to avert a crisis.  The following story reminds us that we are already awash with toxic levels of grog.

A Call to Action from the recent Australasian Fetal Alcohol Spectrum Disorders Conference has been released. Delegates to the conference were clear that now is the time for action and called on the Australian and New Zealand Governments, health professionals, service providers and the community to act immediately on the areas identified.

This includes: public education campaigns, vast improvements in the treatment available for women with alcohol-use disorders, training and support for health professionals to be able to routinely discuss alcohol consumption with women and their partners, continued research on FASD, and recognition and training for many sectors the FASD impacts on and which requires a whole of government response.

The conference delegates also strongly felt that support was severely lacking for people living with FASD, their parents and carers, particularly in terms of diagnostic services, mental health and other health services, disability support and early intervention programs.

These are in part due to FASD not being recognised as a disability. A petition to the Australian Senate has been started for the Federal Government to formally recognise FASD as a disability.

TV Nine News (8/12/13) has reported that  nearly 30,000 Victorians were hospitalised in a 12-month period due to the effects of excessive alcohol consumption.  New data shows that men make up the majority of those hospitalised, but there has been a big jump in the number of women ending up in hospital due to alcohol.

Men aged between 50 and 60 years were the most likely group to be hospitalised.

The data, compiled by Turning Point, shows that during 2010/11 there were 29,694 alcohol-related inpatient hospitalisations.  On average, each of those people are staying in hospital for nearly four days, meaning 113,117 hospital bed days were taken up as a result of excess alcohol consumption.

Turning Point director Professor Dan Lubman said the figures were a timely warning of the dangers of alcohol as Victorians prepare for the Christmas holiday period: “While most people are able to consume alcohol in moderation, the decision-making part of your brain becomes less effective the more you drink,” Prof Lubman said. “There is a clear link between intoxication and increased rates of road accidents, injuries and assaults.”

Alice Springs-based, People’s Alcohol Action Coalition (PAAC) reported in a media release (6/5/11) that NT death and hospitalization rates due to alcohol are the highest in Australia and that Territorians currently drink 70 million more standard drinks every year than the national per capita average.

The latest figures at six million full-strength beers fit with that figure and the reported increase. This is addiction on a large, expensive scale – a social epidemic that calls for supply intervention as a precursor to managing what is economically unsustainable in health and productivity indicators.

A government that pretends that it is justifiable on core cultural terms is leading us deeper into a social morass.
The reverse thrusters should be employed.  Thousands of liters of grog being poured out by police under the 2km law is a somewhat absurd act while the supply tap continues, self-regulated by the alcohol industry.

Picture: In the 1980s, images of multiple road trains importing grog into the NT don’t seem to have had any effect.  Forty years on, the latest figures reveal the equivalent of 115,000 slabs sold, Territory-wide each week. That’s about one slab a week per man, woman and child.