The Boys who made the Big Time 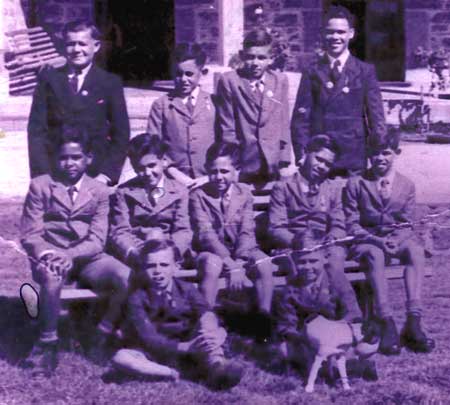 A boy climbed onto the back of a ute on Huckitta cattle station, north-east of Alice Springs.

He remembers the driver was a man with a beard and the passenger was a woman with a red kerchief.

Behind them, in the homestead now disappearing in the dust, is the boy’s mother, Edith Espie, a part-Aboriginal woman working as a housemaid, and his five siblings, children to a white man who would soon leave The Centre and start a new – white – family “down south”.

The year is 1941 and the boy, aged six, is setting off on a trip that will change his life.

After schooling together with some of Central Australia’s greatest Indigenous achievers he would become the nation’s highest ranking Aboriginal police commissioned officer, as a Chief Inspector of the NSW police force, 3000 kilometres away.

The second anniversary on Sunday of Bill “Buckshot” Espie’s death is a good reason to remember his life, but perhaps even more so as Australia has a new government with fixing the entrenched failings of Aboriginal education near the top of its agenda.

The foundation of Bill Espie’s professional and social life started with what some would call “being taken away and being put into the care of a missionary”. He was the first to hotly deny that.

He wrote: “I was born in the ’30s to an Aboriginal mother who through no fault of her own could not have raised me in the way she would have wished, due mainly to economic and social barriers.

“Fancy phrases, of course, but simply meaning being poor and not being fully accepted in the community in which we lived.”

He writes his mother, Edith Espie, who grew up in the Bungalow, now known as the Old Telegraph Station, and had given birth to him in a tent outside the Alice hospital, had the choice of giving him “no more than a twenty per cent chance of being successful, or let me grow up under the watchful eye of Father [Percy] Smith, an Anglican Minister whose parish was Alice Springs. No doubt at great pain my loving mother chose the latter.”

The young Espie went to the Hartley Street School in Alice and boarded at a residence for Aboriginal boys founded by Father Smith and his wife. From there, at age about 12, he transferred to Saint Francis House in the Adelaide suburb of Semaphore, also founded by Father and Mrs Smith.

In today’s parlance the process would probably be called hothousing. Some would probably persist in decrying the boys’ removal from their culture. But the objective of Father Smith (“the term ‘Father’ I suspect arrived from affection rather than religious correctness,” writes Insp Espie) was resolute: pick the smartest and give them the opportunity of becoming high achievers.

Bill Espie’s partner, Maureen Ola, says his accounts of these days were low-key, speaking little about himself but lots about the group, the “boys” with whom he formed life-long friendships.

PHOTOS (from top):
• Some of The Boys who came from the bush and made their mark in the nation: Bill “Buckshot” Espie (back row, 2nd from left). Middle row: Vince Copley, Charlie Perkins, Ernie Perkins (the other two unidentified). Front row: Brian Butler, John Smith (unsure). Help us fill in the gaps! UPDATE: See comment below from Uncle Brian Butler who provided all the names.

The teenage Espie clearly embraced the environment he lived in but not at the expense of making his point when necessary: when the successor of Percy Smith threatened the boys with communal punishment for stealing oranges, the young Espie said to him calmly: “We took them because we were hungry.”

After completing his Intermediate Certificate he trained as a maintenance fitter, joined the army. In 1955 he became a sapper in the engineers and was appointed a field engineer.  He served at Maralinga during the atomic testing.

He moved to Sydney and in 1961 married Iren 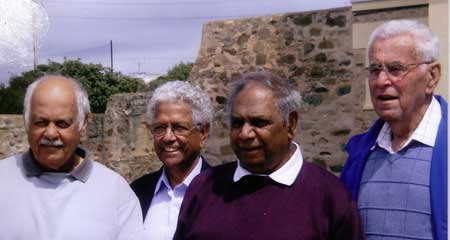 e Zachary. They had four children, all of whom are high achievers.

He entered the NSW police force at age 26  – not before eating two kilograms of bananas to reach the minimum weight.

He quickly rose through the ranks, no doubt in acknowledgement of his exceptional courage: he caught an armed prison escapee, and in the crash of two cars, both of which had exploded into flames, he single-handedly rescued the two drivers.

For this he received the Queen’s Commendation for Brave Conduct in 1965 – the highest award of its kind, reported in the London Gazette. Among the many awards were the Peter Mitchell Award to “recognise his selfless and brave conduct” and the George Lewis Trophy for “the most courageous act” of a NSW police officer in 1965. And in 1980 he received the National Medal of Service, in 1988 the First Clasp to the National Medal and the Australian Medal three months after his death for his service in Maralinga during the nuclear testing. 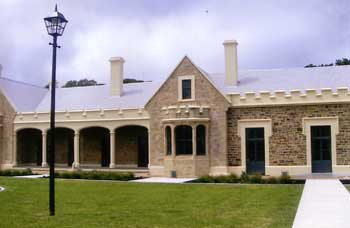 With all that, “the red dirt, the smells, the feelings of the Red Centre were always in his blood,” recalls Ms Ola. And so were his humour and good nature, taken to deliver bush yarns to an audience standing on the counter of a police station.

“He had a block of land somewhere west of The Alice,” says Ms Ola. “Let’s live on it,” he would say. “We’ll have instant air-conditioning. I’ll bring the tin snips.” She declined.

Tragically, Insp Espie was struck down in the last few years of his life by a virulent form of Parkinson’s Disease. Ms Ola says he hated hospitals. When called to Adelaide to visit Mrs Smith on her deathbed, he could not conceal his impatience to leave after 10 minutes, which did not escape Mrs Smith’s attention. “Buchkshot, you are not going anywhere. Sit down,” she said. “Yes, Mrs Smith,” Bill Espie replied, and promptly sat.

On their trips to The Centre they had collected a bottle full of red sand and a few stones from around the country. This week Ms Ola returned them.

FOOTNOTE from Chippy Miller: Peter Tilmouth was my brother. He died in 1973 and was buried in the opal mining town of Andamooka, where he lived with his wife and two children. In 2009, myself, my brother Dave and a brother-in-law travelled to Andamooka to have his remains exhumed and we brought him back to Alice Springs where he was re-buried.