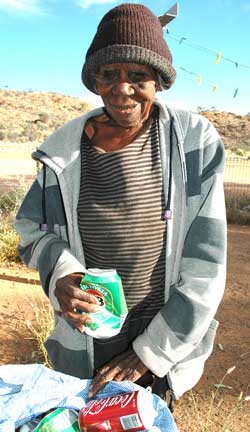 All Aborigines do is  collect sit-down-money, right? Wrong – at least so far as a number of residents in Alice Springs town camps are concerned.

They collect drink cans for recycling – or at least have been, until the NT Government and the multi-nationals who make the stuff failed to put in place something as simple as a workable container deposit scheme.

Yes, while we’re sending probes to the edge of the universe …

The local depot pulled the pin when the government-funded program reached its end and the corporations, including Coca-Cola Amatil, expected the operator to do three times the work for the same pay.

Glenda Hayes (pictured) was collecting cans for a year and a half. Every three weeks or so she earned $100 to $120: at 10c a can that’s 1200 cans. Like the rest of Alice Springs’ recyclers, now she makes nothing.

Mrs Hayes is mining a certain and ample supply of mostly green cans on her doorstep – notwithstanding that Hidden Valley has been declared a dry camp.

The transport is provided by a ute-owning volunteer, well-known author and painter Rod Moss, whose work is about life in the camps, and who received Prime Minister’s Award for non-fiction in 2011. He is pictured with former, former Prime Minister Julia Gillard. 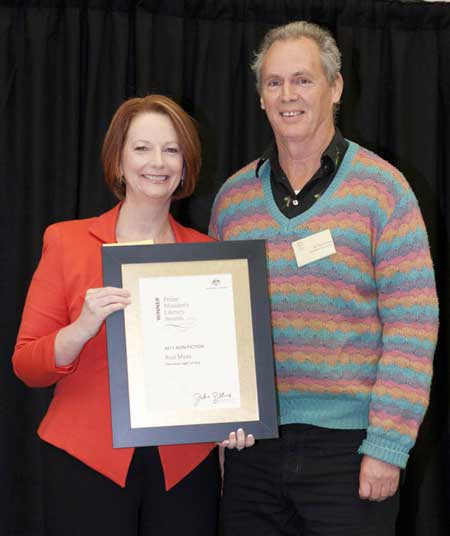 Mrs Hayes is helped by her daughter Bernadine, and relatives Noreen, Marina, Angelina and Jonathan Lou Hayes, as well as Freda Johnson. They all do their own collecting and selling (with Mr Moss’ help).

It had developed into a little cottage industry. In Charles Creek camp, Glenda’s granddaughter Lisa Marie Neal, as well as Eileen Ross, each come up with a load every eight or nine days.

Basil Hayes has Whitegate cornered, and Michael Marshall has set up shop in the Larapinta camp. Meanwhile Mr Moss has had approaches from Amoonguna, just to the east of Alice Springs.

Coca Cola is saying it’s negotiating with a new provider in The Alice: “We are awaiting confirmation of timing with an operator at the moment. Will let you as soon as we can,” the company’s Director of Media and Public Affairs told the Alice Springs News Online.

For the town camp entrepreneurs – and the many other collectors in the town – that can’t come soon enough.