Home Issue 21 Sharing with skaters: if Melbourne can, why not Alice?
Issue 21Issue 22Volume 20

Sharing with skaters: if Melbourne can, why not Alice? 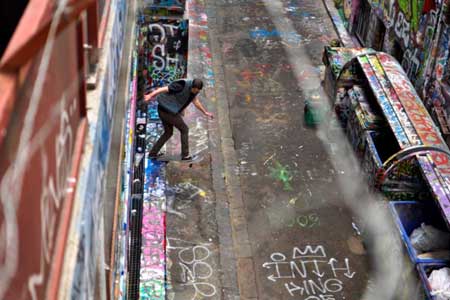 If a busy city like Melbourne can share its streets with skate-boarders, so can Alice Springs. That’s the message Councillor Chansey Paech took to the Town Council meeting last night, distributing copies of Melbourne’s Skate Management Plan and its Skate Safe program for them to read and reflect upon.

At left: The City of Melbourne has encouraged a flourishing youth culture. Here we see a skater enjoying the street and the street art in a back alley off Flinders Street in the Melbourne CBD.

The Alice Springs News reported in December 2, 2010 on Melbourne’s very different approach to welcoming youth and activity in its public places. The City’s website introduces the subject with this sentence: “The City of Melbourne encourages all young people to use the city, including skaters.” It goes on to outline a code of conduct for skaters and BMX riders:

• use your head and skate/ ride according to your ability
• stay in control so you’re ready to stop when you need to
• slow down when overtaking pedestrians
• give way to people in front and beside you
• wear the right safety gear
• don’t bunch up when travelling in groups
• walk through congested areas
• slow down when passing young children and older people
• avoid sessioning in the CBD and Docklands (keep it for the skate parks)
• respect sensitive sites and furniture and avoid getting a penalty
• some routes get pretty busy – avoid these.

This does not mean anything goes, but the City sensibly realizes that its by-laws already cover the appropriate contingencies, with fines of up to $500 for property damage, causing a nuisance, causing excessive noise or endangering others.

Cr Paech told councillors that there was no mention in the Melbourne documents of elderly citizens being run down by skate-boarders.

He foreshadowed that he would be moving to amend the council’s public places by-laws in the coming weeks to be inclusive, rather than exclusive of skaters.

What better place for council to do this than in the revitalized northern Todd Mall, where a facility has been designed to be inclusive of them, he asked.

Cr Paech referred to the high level of support for such a move on social media, suggesting that it reflected a “changing dynamic” in town. Skaters should not be “segregated” from the rest of the community, confined in just one place in town, the Skate Park.

He hoped council would welcome a forthcoming deputation of skaters and supporters. One of them at least was in the public gallery last night, listening to the debate on the issue – former professional skateboarder Matty Day, whom we quoted in our 2010 report. He has since become an important figure on the local youth services scene.

Mayor Damien Ryan asked whether Cr Paech’s proposals would be for the entire CBD or for the northern mall only. Cr Paech said he’d like to start off with the northern mall and “see how it goes” before looking further.

The mood on council was more supportive than previously. Deputy Mayor Liz Martin said her mother had been hit by a skate-boarder outside Yeperenye, yet she still thought it would be worth looking at a Skate Safe type of program as a “necessary way of engaging with youth”. (She had taken a call from an American resident in Alice, who described a similar program operating in the US.)

Cr Eli Melky pointed out that there’s now a lot of space at the northern end of the mall. He would support Cr Paech’s proposals for that area “especially after we went out and designed seating that was skate-board friendly”.

Council’s Director of Technical Services Greg Buxton told the Alice News that the additional cost to strengthen the four seats to withstand the impact of skating was approximately $12,000.

Cr Brendan Heenan, previously against any change, asked only that council’s legal officer be asked about the liability implications.

Cr Jade Kudrenko said she “whole-heartedly” supported Cr Paech in relation to a change in the northern mall.

Cr Paech in a media release said the Melbourne approach “shows how the community and interest groups like skaters can work together in creating vibrant shared spaces in busy cities.

“We can be proactive in encouraging active recreation activities like skateboarding and encourage young people to take some ownership and pride in our public spaces, especially when they have been purpose built to allow this.

“The original plans signed off by the previous council for the redevelopment of the northern end of the Mall included the installation of skateable street furniture, which is in place but out of bounds to skaters.

“This doesn’t make much sense to me.

“I’m not advocating open slather to skateboarders, but I am sure we can come to an arrangement that would allow skaters to utilise the street furniture, ensure pedestrian, driver and skater safety, and boost greater public use of the revitalised northern end of the Todd Mall.”

For story and comments: No you can’t 🙁

Cops and skaters now coexist in the mall