The politics of love 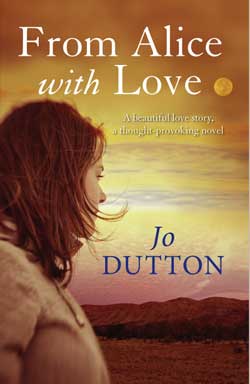 At the launch of her new novel, From Alice with Love, Jo Dutton spoke of fiction’s power to change the way we think. By this measure, the achievement of her book is to tell an emotionally textured story of lives lived in and near Alice Springs. If it changes the way we think, it’s by getting in under the usual glosses of the social landscape of The Centre and letting love propel her story, love between particular people, black and white, living in recent times, and love of the country.

The central character, a young woman called Alicia, was born and grew up here. Alice and the bush are the places of her childhood memories, which means her story can be told from a familiar, intimate standpoint. She is a child of the generation of non-Aboriginal people who came to work with Aboriginal people in the self-determination era, particularly on building their own community-controlled organizations. Her mother Ros has 30 years behind her in this kind of work and from early on formed a strong friendship with an Arrernte family centred on the matriarchal figure of Magdalene. She has been part of Alicia’s growing up, and her grand-daughter Lekisha, Alicia’s playmate and enduring friend.

A lot of the attention focussed on Alice Springs from the outside fails to grasp the way that ordinary lives are lived here and fails to grasp entirely the possibility of personal relationships across the cultures. Dutton, writing from the inside, puts flesh on the bones of that possibility. The bonds between her main black and white characters are warm and strong without being overly idealised; the boundaries are softened without being dissolved; individuals are likeable, some loveable, while also being, as in life, irritating, frustrating, not always to be relied upon, and having occasional bursts of bad temper.

For both black and white in her story, one’s own family, own business, own agenda, remain primary. Thus what brings Alicia back to The Centre – she has been away studying, working, marrying, divorcing – is a personal crisis: her mother Ros is seriously ill. What keeps her here is her own readiness for change: in her mid-thirties she is newly single and childless, contrary to her deepest desires. She needs to reshape her life. What allows her in a practical way to do it is being able to take up the position of teacher in a one-teacher school on Magdalene’s family outstation. What makes life rich, varied and challenging is taking up the threads from all of this to weave new possibilities. Luckily for Alicia, one of the threads is an attractive, single man, a teacher in another nearby bush school, but the prospect of a relationship with him is not without its significant obstacles.

All of this had me engaged and caring about what happened to the end. Dutton brings to life with a light touch her characters, white and black, and their relationships, made possible no doubt by her own decades-long experience of life here. She has worked as a teacher, including at the Irrkerlantye Learning Centre, which for a number of years existed in a humble collection of buildings on South Terrace owned by the Catholic Church, offering a unique inter-generational approach to education for a number of Eastern Arrernte families. She acknowledges that experience and those families as the inspiration for her book.

Dutton also offers something of a portrait of non-Aboriginal society in The Centre, particularly those people who are stalwarts of Aboriginal and other service organizations, a significant group. The way they live reveals a side of Alice Springs that is cherished by residents and remains hidden from the view of visitors. Their social life is centred on meals shared in their own homes and gardens. Their close networks fill the place of extended family. Indeed Alicia refers to long-standing friends, white and black, as her “Alice family”. The external fabric of the town offers the necessary support to this rich private domain, but there’s no affection for it and especially not for the town centre. This is in contrast to the feeling for the town’s natural setting and the surrounding bushland. Dutton renders this well, particularly through the eyes and heart of Alicia. Her responses to the country’s spaciousness, to the many and varied facets of its beauty, to its moods, its demands and challenges, are amongst the book’s most affecting passages. 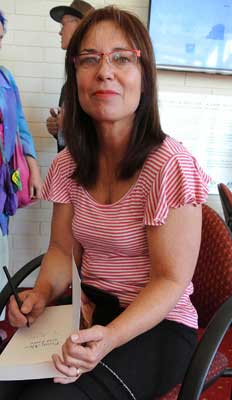 Dutton’s evocation of life at the outstation, nicknamed Promised Land, and the ways it is negotiated with the outside world also stands up well. The balance is towards the positive and we know such places do exist, especially where there are strong figures such as Dutton’s Magdalene, Henry, Lekisha and Treasure to anchor and drive them. Not everyone is strong and focussed, however, and some of the young people of this family group are shown to be particularly vulnerable. Lekisha’s son battles with the lure of grog, while Maxine, the mother of his baby, is all but lost to it. Alicia regards Maxine’s abandonment of her responsibilities as verging on the criminal. Yet family have stepped in to take care of this child who is shown to be thriving.

At right: Jo Dutton signing books at the launch of From Alice with Love

Which brings us to the book’s quarrel with the Intervention, ushered in at about two-thirds of the way through. All of the children we meet are “doing okay”, as Alicia sees it. She struggles sometimes with “aspects of the kids’ lives” but we don’t know what particularly, other than a concern from time to time about their diet (too much fatty, salty and sugary food). At school they’re doing quite well and this is not just as a result of the Promised Land experience. Alicia, with Lekisha as her assistant, is not shown to be struggling with older primary school age children who have no grasp at all of literacy skills. On the contrary: with a few weeks of intensive coaching their students get through the national benchmarking test with “nothing to be ashamed of”.  Generally, the children are fun to be with, they respect their elders, they’re interested in their culture, functionally bilingual, skilled in the bush, not sickly (with the exception of little Mary who has foetal alcohol syndrome), not neglected and certainly not abused.

As it is this group of people which offers the novel’s readers a perspective on Aboriginal life in The Centre, the Intervention comes across as outrageously unwarranted, even if Dutton suggests some balance through Ros. She, despite her long affiliation with the self-determination movement, sees the Intervention as needed “on some levels”, though she doesn’t specify what they are. Ros’ friend Iry also thinks the Intervention is well overdue, but Alicia describes her voice, when she’s speaking of why, as “full of barely restrained hysteria”.

How the Intervention unfolds is described in the general and at times inaccurate terms of its opponents. It’s announced as the government “sending in the army” and “suspending the Racial Discrimination Act”, with no information to contextualise or give nuance to either of these actions. Their menacing image is allowed to linger. The arrival of the army is shortly followed by a “frontline medical team … tasked with assessing all the kids for evidence of abuse”. This is quite simply misinformation. Universal compulsory checks were knocked on the head almost as soon as they were proposed, with the medical profession pointing out the ethical problems and the government taking this on board. Only children whose carers requested it or who had come to the attention of the protection system for suspected sexual abuse were checked specifically for it. Otherwise the comprehensive general health checks on offer were voluntary.

Dutton also has the residents at Promised Land – a small outstation, a “long drive” from the nearest community – almost immediately swept up by income quarantining, ambushed by “surprise tactics”, whereas in reality the system was trialled initially in just a handful of larger communities that met certain preconditions (none of which applied in an outstation such as Promised Land). SEE NOTE BELOW. It took much longer to be more comprehensively “turned on”, with numerous adjustments along the way. Dutton also represents the system – and Centrelink who delivered it – in an entirely negative light, whereas it did and does have its supporters, including amongst Aboriginal people who are subject to it.

Am I wrong to pick these bones about a pretty complicated set of circumstances, about which there are deeply divided views, in a work of fiction? I don’t think so. Without wanting to make the book sound at all polemical, which Dutton mostly studiously avoids, I took its strongest argument against the Intervention as coming from the people and lives Dutton depicts, which show the downside of the Intervention’s ‘one size fits all’ approach. The issues at stake were and are critical and no-one is served by an exaggerated representation of victimisation of Aboriginal people. Dutton’s fiction is delivered in realist mode and many readers will take its account of the Intervention as essentially factual.

Dutton spoke at the launch of her political intentions in writing the novel, with her core strategy being to write it out of a position of love – love of the country, love of its people. There is much that she has achieved from this stance; it would only have been enhanced by greater care taken with her research and a more balanced exposition of the political and social upheaval around which she has told her story.


NOTE: After further enquiries with a well-informed source, I realise that it would have been possible that a person living on a small outstation at the time, but with an address registered with Centrelink in one of the first five larger communities where income management was trialled, to have been swept up in its provisions from the outset. One of those five trial communities was Santa Teresa, which seems to be the Mission referred to in From Alice with Love, and with which residents of the novel’s Promised Land outstation are closely associated. The others were Mutitjulu, Imanpa, Aputula and Titjikala.


RELATED READING – selected articles from our foundation archive about the early days of the Intervention:

Getting to know each other

Taskforce: many kids very sick at Ti Tree and Hermannsburg

Brough intervention: Anderson says it is the change we had to have

Talk to us, not urban people: Green Senator is off mark