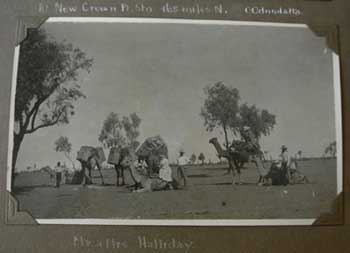 A photograph album close to 100 years old recording a journey from Oodnadatta into the mining country north-east of Alice has made its way into the hands of Alice Springs historian Dick Kimber.  The album was bought at a jumble sale in the Blinman area, SA, around 1980 by William John Rose. His daughter Judi Francis recently gave it to Mr Kimber for him to place in the Northern Territory Archives.

The photographer thus far is not identified but Mr Kimber believes he may be related to one of the men featuring in the photos. He says they appear to be an official party of some sort, certainly with an interest in minerals, and the clothing suggests that it was winter-time. Hand-writing on the front of the album says the year was 1918.

The party travelling by camel “at three miles an hour”, according to one caption, made its way north from Oodnadatta and seems to have met up with another party along the way. The large group and their camels are shown in a photo (above right)  captioned “Mr and Mrs Halliday”. Mrs Halliday is clothed in white. Mr Kimber comments that it is “relatively unusual to have a well-dressed woman travelling at the time”. 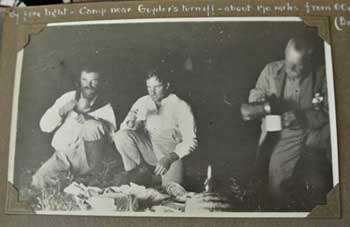 A photo taken by firelight (at left) shows three members of the expedition, “Bromley, Williams and Stokes”.

“This is almost certainly of an old stage-coach and camel mailman called Bromley who is buried (as I recall) at Newcrown Station,” says Mr Kimber.

“Williams may have been a builder and general bush worker who lived here for decades and married an Aboriginal woman whose daughter was Walter Smith’s second wife, who died only a fortnight ago.

“Stokes may be the grandfather of [Alice local] Maureen Trindle.”

Mr Kimber says he knows of no other photo of Stokes, a major prospector of the era.  There are other photos of him in the album, though none showing his face. There is one of him filling a bag with his finds (bottom left), labelled “Rubies!”. This was taken at Maude Creek, one of the main ruby rush areas, north-east of Arltunga. 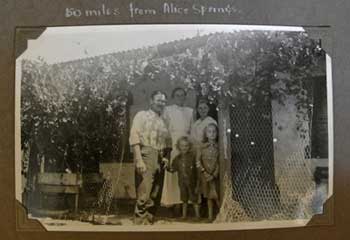 Before reaching the ‘ruby’ field (they turned out only to be garnets) the party passed through Deep Well, where they met the Johannsens. There’s a fine photo of the family (at right) outside their home, with their famous son Kurt, the inventor, as a tousled youngster holding his father’s hand.

Two photos pasted together present a panorama of Alice Springs, looking very sparse and dry, and another photo shows Heavitree Gap, with an animal enclosure built right there in the riverbed. This was in the days before the infestation of couch grass and the riverbed is wide and flat and clear.

The part made dinner camp north of Alice at Love’s Creek with William Benstead, the owner of the first Stuart Arms Hotel and a major entrepreneur in Stuart (as Alice Springs was originally called). It is likely that Benstead would have been able to tell them about the lay of the land at Arltunga, says Mr Kimber, and once they’d arrived Fred Cavanagh did the same. There’s a photo of him pointing things out to Stokes and a charming photo (bottom right) of Mrs Cavanagh, nee Eleanor Sanders, with one of her three children. 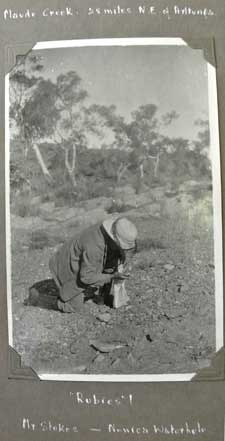 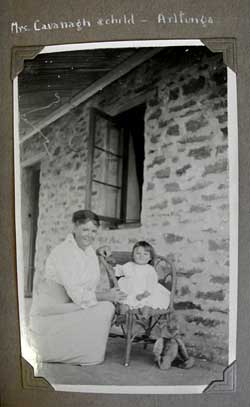 “It looks like a girl but it may be Bill because very young boys as well as girls were dressed in smocks at that time,” says Mr Kimber. “Bill too has only recently passed away.”

The album is remarkably well-preserved, the photos of good quality and with the help of a trained eye, like Mr Kimber’s, it presents a fascinating window onto the past.

By ERWIN CHLANDA The Town Council is in breach of its purchasing policy that requires price comparisons ensuring that the ratepayer isn’t ripped off. That policy...
Read more
Issue 42