After years of under-achieving, tourism promoters say they are getting cracking

Last week’s Territory deputation, headed up by Tourism Minister Malarndirri McCarthy and including Alice Mayor Damien Ryan, to the Australian Tourist Commission has a familiar ring to it: If something goes wrong we run to the Feds to bail us out.
The Feds’ contribution to the Territory is almost five times the national average, allowing a level of funding for our government tourism body that is the envy of its interstate peers. Yet Tourism NT’s sustained underachieving is still failing to halt the industry’s decline or turn it around.
Tourism Australia, Tourism NT, and Tourism Central Australia – the supposed watchdog – all seem to be the best of buddies, set to do great things real soon, dodging answers as to why these haven’t been done much sooner.
Meanwhile all the NT Opposition, three months out from the election, and some four years after the Global Financial Crisis began to nudge our biggest private industry towards oblivion, still has not disclosed its policy on tourism.
ERWIN CHLANDA spoke to some of the players and looked at some of the numbers. Ms McCarthy did not respond to a request for an interview.

Niche marketing its events, such as the Finke Desert Race, is how Mayor Damien Ryan believes Alice Springs can get itself out of its tourism slump.
He’s recently been to China to “drum up publicity” for the race – as well as the region.
Mr Ryan says a five person crew from a sports television station in Guangzhou, China’s third-biggest city, near Hong Kong, will be covering a competitor from China.
“Guangzhou TV has a massive audience,” says Mr Ryan.
“Everybody else is trying to attract the Chinese market.
“I’m not sure our scenery is all that visitors want.
“Our events calendar is what we have to work with.
“Tourism Australia is a marketing company” representing the industry throughout Australia, says Mr Ryan.
“Our concern was, how do we get Central Australia to be a prominent part of that marketing.
Why hasn’t that been done in the past?
“I’ve never met the Tourism Australia board before.”
Did he ask them why they have not given intense promotion to Central Australia before?
“I wasn’t there to ask that question. I was invited, for the first time, to meet the CEO of Tourism Australia, the biggest marketing group in Australia. We asked them to work with our operators here.”
Tourism NT, per head of population, has a budget 13 times greater than its Queensland counterpart.
Per visitor Tourism NT spends 50 times as much as its NSW counterpart.
During his trip, did Mr Ryan ask the Tourism NT executives why they have not done anything remotely successful to halt the slide of the tourism business in the last few years? After all, the Global Financial Crisis started four years ago.
“I’m no expert in tourism. I was given the opportunity of going down there to talk about Alice Springs and the Finke Desert Race. My whole aim is, let’s market our particular event to that Chinese market. 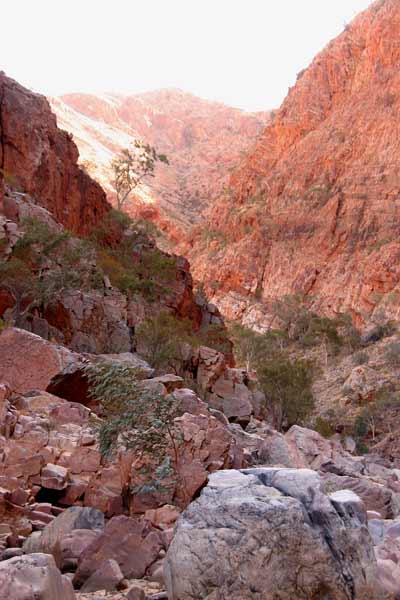 “That’s what we have to do with the Camel Cup, the Henley on Todd, the Mountain Bike event. They are the areas in which we have to become specialists, in the niche markets, to attract crowds.”
Is he saying anything to Qantas about their reduction of services to The Centre?
“No. The government is meeting with Qantas. I wasn’t invited to a meeting with Qantas. That’s something I leave up to the tourism industry.”
Does he think Qantas would say, make Alice Springs a place more people want to come to and we’ll give you the aeroplanes to take them there?
“I’m not really in the game of what Qantas might say.”

“Range of marketing programs in the pipeline … in the new media space, social media in particular … tourism is at a crossroads … partnering … leveraging.”
Jargon and generalities tended to drown out substance in our conversation with Peter Solly, CEO of Tourism Central Australia (TCA) for six months.
What has Tourism Australia (TA) actually done in the last five years specifically for Alice Springs and Central Australia?
“A range of programs … regional Australia and Central Australia are important … developing an understanding of new marketing channels … very keen to work with industry on how to maximise them.”
What have been TA’s five main initiatives since the Global Financial Crisis began to shake the world in 2008?
“That’s a question for them. You need to talk to [Managing Director] Andrew McEvoy about that.”
We’re talking to you about this because Tourism Central Australia represents the industry here which surely would like to know what Tourism Australia has been doing.
“What I am saying to you is that I am keen to look to the future. The industry in Australia has been in decline, there is no doubt about that.”
So, that’s a no comment about what The Centre got from the national body in the last four years. What about the future, then?
Mr Solly, albeit in a very general way, has a broader view than Mayor Ryan whose favoured special events can always only be a tiny a fraction of the attractions: after all, Finke, Henley and Camel Cup, between them, can keep tourists amused only four days a year.
In Mr Solly’s take niche markets include all-year-round opportunities such as the Larapinta Trail and 4WD adventures, cycling, bushwalking, bird watching … “the great landscape”.
But given that all this is hardly news, what has the lavishly funded Tourism NT done for The Centre since the start of the GFC?
“What we should be doing is working with them as an industry to better leverage those things they are doing.”
Have they done a good job for us in the past for years? What precisely have they done for Central Australia?
“Maybe Alice Springs hasn’t had as much ‘destinational’ marketing as they might have in the past … Alice Springs needs to become a destination in its own right. That’s really important. We want to partner with them in some of these niche markets.
“‘Extend your stay by one more day’ is a campaign we’re running at the moment. We want to start working on some of that low hanging fruit. We want to be much more strategic.”
Answer the question, please: what has Tourism NT done for The Centre in the last four years? 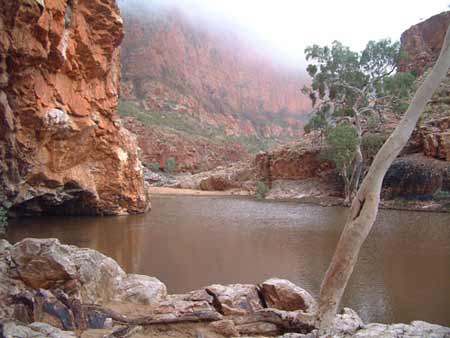 Again Mr Solly’s answer is about the future, not the recent past – but this time with a concrete example: there is a major trail symposium in the US next year, to be attended by all the key players in that industry, with a national award “and if we don’t win it we’ll certainly put the Larapinta Trail on the horizon”.
TCA is “right in the middle of developing a strategic plan” for cooperation with Tourism NT.
Amazingly, with the slump becoming endemic, the wheel is still being invented.
In the lead-up to the NT election – just three months away – TCA is developing a 10 point plan to be put to both parties.
TCA  is not making details available as yet, and is also calling for an industry task force and an all-of-government-approach.
Of the $40m that Tourism NT gets every year, how much goes to (a) Alice Springs and (b) Central Australia excluding Alice Springs?
Head of Tourism NT John Fitzgerald “is the best person to talk to about that,” says Mr Solly.
Tourism CA is the industry’s watchdog over Tourism NT; what is your knowledge of these figures?
“We’re having significant conversations with John Fitzgerald and the Minister about new ways of working together.”
Since the GFC started, how much has Tourism NT spent in The Centre?
“I haven’t got the number right in front of me. We’re pushing hard to make sure we’re getting our fair share.”
Do Tourism Minister Malarndirri McCarthy (cutting flights “is not good enough for Territorians”) and Unions NT President Heinz Schmitt (“it is difficult not to show contempt” for Qantas) have a point that the airline owes a debt to the Territory?
Says Mr Solly: “Uluru and Kata Tjuta, without any doubt, are one of the key icons used to promote Australia.
“So in that context, just because they exist, there is some leverage and some marketing dollars that Qantas clearly gets out of that.
“So, do they owe us something? In this world of making a profit on behalf of the shareholders, probably not.
“But in a sense that we have one of Australia’s great icons in Central Australia, probably yes.”

Shadow Minister for Regional Development Adam Giles is vocal on the Qantas cancellation of some services to Ayers Rock but his party is still silent on the broad picture of tourism.
With the election ’round the corner the Country Liberals still have not announced their tourism policy.
He says the cancellations “will have a detrimental impact to our tourism industry and our local economy more broadly, but Qantas makes commercial decisions as any business does.
“With every negative you always have to look for opportunities and I think we can put a greater focus on Alice Springs as a gateway to the region.
“I see that there are two important aspects to improving tourism, firstly fixing our law and order problems so we can see positive news and word of mouth stories going around the world; and the local industry needs to be empowered to have a greater say in the direction of their industry, taking control of marketing in particular.
“I’d also say that as a community content renewal and redevelopment is important and increasing our content and types of content will be important to rebuild our tourism industry.
“I know there are many people who support the full services offered by Qantas but I believe as a community it may be time to have discussion and debate about the merits of lobbying for Jetstar services to The Centre to improve the competitiveness of airline prices and in turn attract a greater number of tourists.”

A dominant feature of our tourism’s big picture aviation – we’re a long way from anywhere.
And the elephant in that room is cost: our northern neighbors have modern, efficient and safe airlines that are much, much cheaper.
Here are a few random calculations, based on the cost per seat and per kilometer.
AIR ASIA
Darwin to Beijing return 8.2c/km
Perth to Bali return 3.9c/km
KL to Tokyo one way 2.4c/km
Beijing to Kuala Lumpur return 4.6c/km
QANTAS
Alice Springs to Sydney one way 18.4c/km
Sydney to Alice Springs one way 13.6c/km
AIR ASIA specials
Kuala Lumpur to Penang $10
Kuala Lumpur to Siem Reap (Angkor Wat) $47

PHOTOS from top: The Qantas counter at the Alice airport where the airline has a monopoly. •A valley in the West MacDonnells viewed from the Larapinta Trail. • Ormiston Gorge in flood.