Public gets the polite rehearsed version

Councillor Steve Brown’s move to create a Town Council body to monitor the effective delivery of government services in Alice Springs inched forward at last night’s end of month meeting.
The concept is similar to one operating in Port Augusta, reported on by the Alice Springs News Online in the wake of the council election campaign as part of an interview with outspoken Mayor of Port Augusta, Joy Baluch.
The concept was promoted in the campaign by candidate John Reid.
Removal of standing orders last night allowed a mild-mannered discussion of the subject, with no sign of ‘gangs’ of four or five. The end result was that councillors will put their heads together with Corporate and Community Services Director Craig Catchlove, pooling the information they have gathered. At the urging of Cr Geoff Booth, it was decided that this will start at an early morning meeting in the coming week. 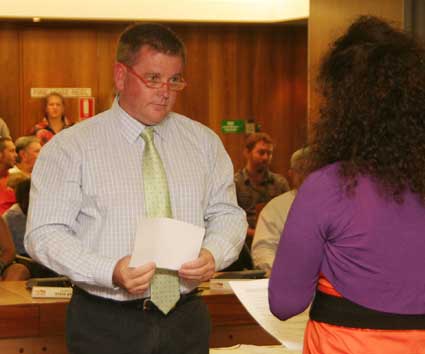 He, Cr Brown and Cr Eli Melky all wanted it to be seen that council is doing something “urgent” (Booth), “immediately” (Melky) to address the “considerable anxiety” (Brown) in the community over law and order issues and economic decline.
Cr Liz Martin told her colleagues she had spent a lot of time over the last week talking to people in Port Augusta and had information to share with them, including about that town’s “alarming” rate of substance (other than alcohol) misuse and relatively high crime rate.
Cr Booth also said it was “vital” that council seek the views of business owners in the mall, while councillors supported Mayor Damien Ryan’s suggestion that he contact representatives of the Combined Aboriginal Organisations after they meet tomorrow to discuss current social issues.
Apart from questions to a deputation from the National Trust (about which we will report separately) this was the sum total of discussion in the open section of the council meeting, during which everyone was on their best behaviour.
The report from the Finance Committee was a pure formality and all over in 30 seconds – this despite the major announcement during the week that the YMCA is withdrawing from its contract to run the Town Pool and that budget drafting is in full swing. In fact councillors had met early that morning to thrash out some aspect of the budget – what exactly we will never know.  Council does release a draft business plan for public comment but the public is never privy to debate around its priorities. The public comment that is received is usually very narrowly focussed.
In a question pertaining to finances from the public gallery, none other than retired MLA Lorraine Braham asked whether council could sell its glass crusher, now “lying idle”.
Mayor Ryan said it was not idle, it continues to crush glass and there had been discussion “today” (presumably at the early morning meeting) about another project for it. As it was purchased with grant money ($850,000 for the machine and its set up), it would be difficult to sell, he said, adding that the Technical Services Director would be able to give Mrs Braham a more detailed reply. Although he was sitting by Mayor Ryan’s side, unfortunately Mrs Braham did not ask to hear the detail then and there.
Now debate around the Port Augusta-style monitoring body, in which there is keen public interest, will also take place behind closed doors. Getting things done should not come at the expense of transparency.

Pictured: Cr Geoff Booth during his swearing-in with Local Government Minister Malarndirri McCarthy. He wants immediate action, but will it come at the expense of  transparency allowing public input?