Immerse yourself in this watery world 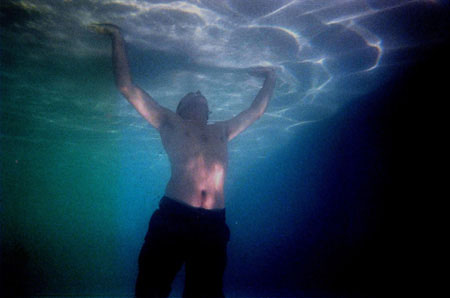 A darkened room behind a heavy black curtain in a gallery adds something of the anticipation  you feel at the cinema or in a theatre as the lights go down, heightening  the usual anticipation of an art show. And typically the artist working in this space strives for immersion – the viewer’s in the artist’s work. How apt this context for Suzi Lyon’s work, Looking for Turtles. And how refreshing, invigorating – like a plunge into a deep pool –  to experience work of this nature in Alice Springs where digital media and installation continue to be relatively rare.
You don’t need Lyon’s evocative artist’s statement (but do read it, at least afterwards) to understand, immediately, that this is a work about longing for transformative, transporting experience, to be taken out of the everyday.
All but one of her images – taken with a disposable camera – show the human figure or figures underwater, mostly not in conventional diving or swimming actions, but fully engaged nonetheless in moving through water. The freezing of this movement inscribes the images with a passionate expressiveness and intense physicality – arms and legs outstretched, hands and feet extended, backs arched, muscles clenched. You only normally see the human body as expressive as this in dance or sport or sex or dreams.
Most or possibly all of the images were taken in swimming pools. Among the most compelling are those where this is not immediately obvious and the figures seem to be in water-filled rooms, water  pressing in on every fibre of their being, as they thrust against it, burst through it in moments of high drama.
The blue pool images are more expansive, less dramatic but with a dreamlike emotional intensity, some more captivatingly so than others. Lyon judged well in having her subjects wear street clothes (as opposed to bathers). This adds to the other-world feeling she has created, as does the subtlest animation of some of 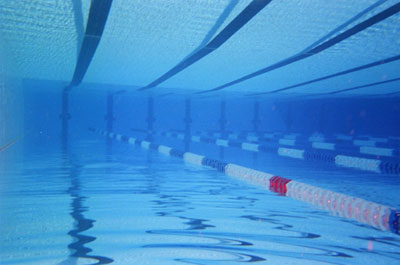 the images, for which fellow artist Ben Ward is responsible. This is so well done that I was not sure at first that I had actually perceived movement in the image, especially as only parts are affected, with the figures remaining utterly, and strangely, still.
The sole image of a watery space without figure is a fine still photograph of that unearthly perfect, somewhat claustrophobic world that is a chlorinated indoor pool. The animation of this image lends it an unsettling quality, a trembling tension ahead of who knows what …
Give yourself over to this show, be sure to watch it more than once and let its subtle power work on you before you return to your everyday.
Lyon’s artist’s statement locates her everyday here in the desert and equates it with a grind that is paralleled in the landscape – “bleached and glaring”, her dreams “sucked” from her and leaving her feeling “dry and gritty” and like she has “old bones”. None of this is concretely present in the actual work, in which the everyday is far more nebulous – it is simply what has been left outside, above water, and the work itself does not speak of its qualities, staying in this watery world of Lyon’s dreams.

Showing at Araluen, where Lyon and Ward will give an artists’ talk this Saturday, February 18, 11.15am.