Fuel rip-off: Town Council challenged to put their hands to the pump 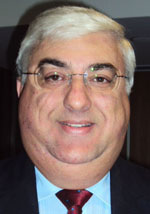 The Town Council has been challenged to go into the fuel retail business, possibly as a joint venturer. Failing that they should form a collective bargaining group with other regional councils to negotiate a better deal on petrol prices for the community.
So urged Frank Zumbo, Associate Professor of Business Law at the University of New South Wales (pictured at left), for whom a fairer price at the pump around Australia, and especially in the regions, is an enduring research interest.
Invited to speak to council at their committee meeting last night, Prof Zumbo said motorists in Alice, as elsewhere in the regions, are getting “ripped off” by major oil company and retailer price gouging.
“When margins get close to 30 cents a litre at the retail end, you start to think there’s something wrong in the whole process.”
This has a knock-on effect throughout the community, and especially on small business.
There are rip-offs in the metropolitan centres also, but they are greater and more often the case in regional Australia, said Prof Zumbo.
He based his estimation of the rip-off on a comparison of the average notional wholesale price of petrol around the country – 137.7 cents/litre – with the average retail prices in Darwin, Katherine and Alice Springs: these are 154.2, 146.1 and 165.5 respectively.
He surmised that the consistently lower price in Katherine is because the market has effective competition, while the consistently higher prices in Darwin and Alice are due to a lack of competition, with the major oil companies and retailers forming “a cozy club” with a “collective interest” in having their prices and profit margins as high as possible.
The argument that the costs to get fuel here mean that we have to pay a higher price is undone by the Katherine example. If this were the case, their prices would be higher than Darwin’s. Looking at the Katherine example, “you start to realise there is a lot of wriggle room here, there is a lot of fat in those margins”, said Prof Zumbo.
“We need greater transparency across the supply chain. We have fairly good transparency at the retail level [the prices he quoted are publicly available on websites] but we don’t have that level of transparency at the wholesale level.”
The presence of independent competition is critical to lowering prices, said Prof Zumbo.
This is where the council could make a difference.
“Where markets fail there is a proper role for government to intervene in some way … [and] where you have a rip-off the market is failing.”
Council could provide incentives for an independent player to set up in Alice. This could go so far as becoming a joint venturer to minimise that player’s risk.
“You only need one new player that can introduce meaningful competition and you will see lower prices.”
“Fat margins” normally attract competitors but they may be afraid of being ambushed by the established players.
Council could make money through such a venture, he suggested, and save money on its own fuel expenditure. There should be no question of council subsidising the operation with ratepayers’ money.
Alternatively, council could enter into dialogue with like-minded councils about doing some collective bargaining to get a lower wholesale price.  Together councils could approach an independent importer: “Councils do have volume which I think independent importers would be interested in”.
If the councils had a tanker that met safety requirements they could buy at the wholesale price.
“I’m sure there’s a business case to be made,” said Prof Zumbo.
He much preferred these possibilities to going down the regulation path (with a regulator setting maximum wholesale and retail prices). Indeed he expressed cynicism about the Australian Competition and Consumer Commission: they “like to watch and watch and watch”, he said.
He has long been calling on them to conduct a national benchmarking study to clarify the situation with respect to wholesale and retail profit margins once and for all. And he has a standing challenge to the ACCC’s petrol commissioner to debate him on these issues, preferably in regional Australia.
If council takes the issue further, he will advise them in any way he can on an honorary basis: “I’m not on the lookout for consultancies … the university pays my wage.”
Now, there’s a ball for a new council to play with.

Facebook
Twitter
Pinterest
WhatsApp
Previous articleDarryl Pearce still has hand in real estate deal as titles are issued: We were kept in the dark, says native title holder
Next articleLETTER: Attack on film crew – should we defer to criminals?