Endangered possum pictured in the wild 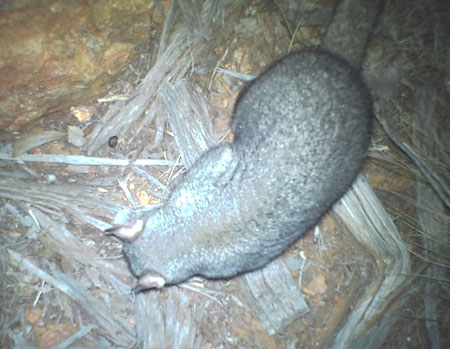 An infrared camera at a bait station in Ormiston Gorge has captured remarkable first photographs of the endangered Central Brush Tailed Possum in the wild.
Parks and Wildlife Service Ranger Deon Grantham says rangers have monitored the site for a month and half.
He says the photographs are a major breakthrough as they provide clear evidence that possums are still present in the area.
“Until now, all we had was circumstantial evidence such as tracks, droppings or marks on trees, so we believed possums were present but we didn’t know much about them.”
The find opens up the possibility of further monitoring in other areas of the West MacDonnell National Park, possibly the last stronghold for this type of possum.
A prescribed burning program has helped protect the area from recent bushfires.
An extensive biodiversity monitoring program has been started that will see more than 150 sites surveyed across West MacDonnell National Park, Finke Gorge National Park and Watarrka National Park over the next four years.
The program is designed to document floral and faunal biodiversity, investigate the impacts of environmental weeds and fire, and detect any negative trends that may require management.
Source: The NT Parks and Wildlife Service.