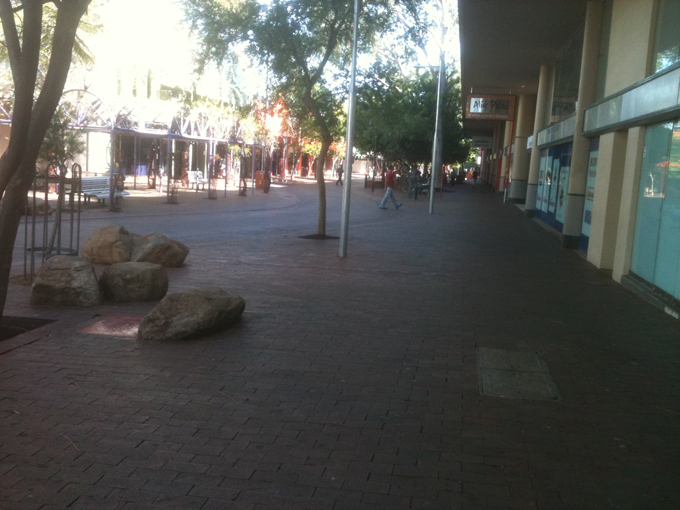 The northern section of Todd Mall (photo above) may be opened up for vehicle traffic again in a bid to breathe life into that part of the CBD.
This would result in Alice Plaza businesses, currently accessible mostly from the interior of the shopping centre, being open to the mall as well.
Alice Springs News Online understands this is part of CBD revitalization proposals due to be made public by the Town Council in about two weeks’ time.
Under consideration is the entire mall and the part of Todd Street to KFC at the southern end.
“Traffic calming” is suggested for where the mall feeds into Wills Terrace and Gregory Terrace, the scene of frequent prangs. Traffic in those two locations would be slowed down and pedestrian friendly areas created.
Footpaths would be widened in Todd Street between KFC and the mall.
One suggestion is to have vehicle traffic from Parsons Street turning north through the mall to Wills Terrace.
This would enhance the sails area – already a natural meeting place – by becoming a vehicle drop-off point as well.
Two-way traffic in the northern mall does not appear to be favoured.
It is suggested that the changes to the mall would be complemented by a town square on the site of the Town Council owned Hartley Street car park, linked to the mall through an enhanced public space around Flynn Church and Adelaide House.
The source says the town square could incorporate shops, parking and even residential uses, most likely in two or more story developments.
The council is treating the proposals as confidential at the moment.
Representatives from the NT Government, which has allocated $5m to the revitalization, are due to give a presentation to the council on September 27, the News understands.
According to Stuart Traynor’s Alice Springs Time Line, Todd Street was turned into a semi-mall with one-way traffic in 1978.
The semi-mall at that time was affectionaltely known as the Small.
In 1987, according to Mr Traynor, Todd Street become a full mall.
The photograph (below) shows Todd Street from the north looking south in the 1960s.
The photograph, supplied to us by Barry Allwright, comes from the Bill and Daphne Vivian Collection, Central Australian Historical Images, Alice Springs Public Library.