Report figures on the proportion of Aboriginal people expected in Alice by 2030 “way, way off”. Researcher now says she got it wrong.

“Rest easy, the public servants are onto it. But if you’ve got any (cost free) new ideas, let us know.”
This was essentially the message from Tuesday’s feedback forum on the Alice Springs Community Action Plan. The fact that the forum did not cover new ground or open up a space for new insights, directions and initiatives would have given comfort to the boycotters (see separate report), although Alderman Eli Melky did attend.
First up, consultant Jane Munday summarised the report she had compiled, “intended as the first stage in developing” the action plan. This is described as a “research report”, commissioned by the Department of the Chief Minister. Ms Munday is experienced and well-qualified in public relations and marketing. Her report is essentially about a number of consultation exercises she conducted; its “research” is not of the probing kind. For instance, she repeats what is frequently heard in public fora, that “the proportion of Aboriginal residents (now 21%) is expected to increase to about 45% by 2030”. She sources the figure to a presentation at the Kilgarrif forum by the Department of Lands and Planning.
Such an increase would be huge, a radical change to the demography of the town and with potentially far-reaching implications, but it is “way, way off” according to Dean Carson, Professor for Rural and Remote Research at Flinders University.
Professor Carson explains: “Alice Springs has about 20% Indigenous population. We would expect 2011 Census to show about the same – the increase from 15% has taken about 15-20  years. So, [with] another 20 years, and even a similar rate of proportional increase, you may have 23-25% Indigenous at a stretch. 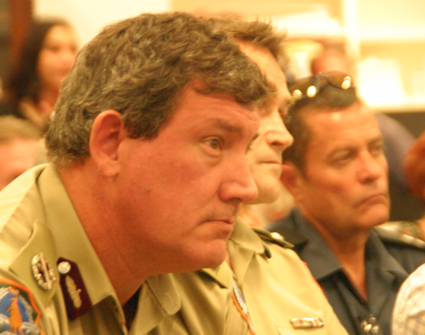 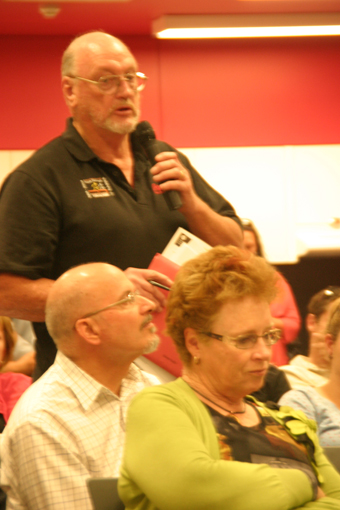 Ald Melky lamented the state of affairs whereby the town’s youth is “now the bad guy”, reminding those in attendance that it was not long ago that they were young too. He turned to speak directly to Minister for Central Australia, Karl Hampton, who was present at the back of the room (he did not speak at the meeting). Ald Melky charged him, “as the only one in the room with the power”, with the responsibility for keeping the streets safe.
Mayor Ryan commented that it was the responsibility of “each of us”. Ms Liddle suggested that a “mechanism” could be found to promote “some of the good things our young people do”.
Ian Sharp wanted to know if there was any data about the impact of negative publicity about unsafe streets on the tourism industry. He referred to recent comments by Michael Toomey, manager of commercial and retail operations at the Royal Flying Doctor Service in Alice, that big picture national and international factors are a much greater influence on the current flattening of business than specific factors such as negative publicity.
Peter Grigg, general manager of Tourism Central Australia,  said he has encountered “very, very little” by way of negative perceptions in the consumer shows that he has attended. When he did hear concerns, he was able “to put people’s minds at ease”. He said the town’s residents are the best ambassadors for the town and they need to get it out there that they love Alice Springs.
Ald Liz Martin, who is on the committee for the action plan, asked Commissioner Payne whether forensic investigators would be brought in help find who is responsible for the many recent deliberately-lit fires. He replied that the “greatest resource” for detection is people keeping their eyes open and reporting suspicious behaviour to police: “That’s how we catch people and we have had some success.”
The meeting was wrapped up at this point, but further enquiry by the Alice News revealed that the “success” amounts to one arrest and a couple of leads.
Meanwhile, the report and other materials as well as a list of actions that people are invited to prioritise is on the NT Government’s Safe Communities’ website.
The Family and Children’s Services number to call if you are concerned about a young person is 1800 700 250.
Jane Munday replies:
Michels Warren Munday is a communication consultancy that, among other things, specialises in community consultation.
We were engaged by the Department of the Chief Minister to put together a community action plan.  The first step of this exercise was community consultation – the ‘research’ you refer to.  Consultation means listening.  Our job was to listen to the community.
We were not engaged as demographers or economic modellers.  However, we do recommend strongly that there is a need for mobility and social research like the previous Tangentyere mobility study to provide accurate data on a range of issues, including population trends.
Having said that, I have made a mistake in one of my dot points on page 9 of my report.  ABS figures show the proportion of Aboriginal people in the town of Alice Springs was 21% in 2006.  Government projections are that 43% of people in the Alice Springs region (including its hinterland) will be Aboriginal by 2021.  As the Alice Springs News has reported previously, there have been comments made that the Aboriginal population in Alice Springs will rise to 70% by 2030 – all the more reason for a study to provide accurate data and bust the myths.
I would be applauding public servants for showing up to after hours meetings and caring about their town.  They are also members of the community. Although some people in our report wanted the public service to ‘shrink’ or disappear, the actions they wanted are almost entirely dependent on government spending and public service delivery.
It can be daunting to stand up at a public meeting.  Sniping doesn’t seem like a just reward.  One of the findings of our report was that people want change, they want to work together but the barriers they reported were a prevailing negativity, personal attacks and divisions through just about all sectors in the town.
I am not sure why meetings are successful only if people ‘vent’.  Venting is important when people are angry.  There was a lot of venting in our community consultation and it was important to listen to this and understand people’s frustrations.  However, once people have vented, they are more prepared to listen respectfully to other people’s views.  This week’s public meeting was our feedback session, reporting on what the town had to say.  If previous meetings you have attended were full of fire and brimstone, perhaps this is because people hadn’t had the chance to ‘vent’ and be heard.  We report on the community’s feeling of disengagement from government that is the probable result of this.
Our report was intended to be the conversations of Alice Springs people.  It is only the first stage.  We welcome any further feedback but hope people can move forward constructively.
Photos: Top  the crowd thins as boredom sets in. Centre: NT Police’s Assistant Commissioner, Mark Payne. Above: Julie Ross, the head of the Chamber of Commerce,  and Mike Steller listening to Ian Sharp.