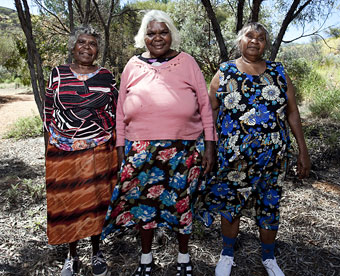 If the term psychotherapy conjures for many the image of a bearded Sigmund Freud in early 20th century Vienna putting his patients on the couch, the Sixth World Congress for Psychotherapy has a mind-expanding surprise in store. Aptly titled World Dreaming, the event in Sydney on August 26 will honour with its Sigmund Freud Award the contribution to the field of psychotherapy by Aboriginal ngangkari (traditional healers) from the Ngaanyatjarra Pitjantjatjtara Yankunytjatjara (NPY) Lands in the cross-border central desert region.
The men and women work in NPY Women’s Council Ngangkari Project which began in 1998. Andy Tjilari and Rupert Peter were the original members of the project; it has since expanded to include Toby Ginger and five women. All the ngangkari are senior members of their communities, and all lived a traditional life in the bush with their families as children, where they began to learn the skills of the ngangkari. Their grandparents gave them sacred tools and special powers, and trained them over many years.
Today the ngangkari continue this tradition with their own grandchildren. They also work in association with numerous groups including the  Northern Territory Government’s Mental Health Team in Central Australia and travel nationally to undertake practice and share their work. The ngangkari believe that better health outcomes for Indigenous people can be achieved by ngangkari and Western medicine working together and to this end they are committed to educating health workers about traditional healing practices.
According to the World Congress for Psychotherapy, their work in applied psycho-somatic therapy “demonstrates the relevance of traditional approaches in modern Indigenous contexts and complements approaches undertaken in mainstream healthcare”.
This is not the first time the ngangkari have been honoured in Western medical fora: most recently they received the 2009 Mark Sheldon Prize awarded by the Royal Australian and New Zealand College of Psychiatry (RANZCP), and the 2009 Dr Margaret Tobin Award for excellence in the provision of mental health services to those most in need.
In 2000 a group of over 50 ngangkari in Central Australia met and decided they would tell their stories as an attempt to educate non-Indigenous health workers about the importance and value of ngangkari, with the aim of encouraging greater collaboration and understanding within the mainstream health system.
NPY Women’s Council has published a book of their stories called “Ngangkari Work Anangu Way”.  A new edition of this book is in production.  A DVD entitled Ngangkari, which displays ngangkari from the project carrying out their therapeutic work in their local settings, is available from Ronin Films.
The ngangkari will share their award at the World Congress with other outstanding Australian Indigenous mental health professionals: Winthrop Professor Helen Milroy and Kamilaroi Elder, Aunty Lorraine Peeters. Professor Milroy is the first Indigenous Psychiatrist in Australia, while Lorraine Peeters, former Senior Australian of the Year (2006), has developed the Marumali Healing Program for Indigenous people suffering the effects of trauma, specifically in relation to the Stolen Generation.
Says Dr Anthony Korner, Chair of the Organising Committee of the World Congress for Psychotherapy: “Together these distinguished award winners represent a spectrum of Indigenous contributions across the country. All [of them] retain and sustain Indigenous perspectives and commitments in contemporary Australia. All work in association with each other within Indigenous networks. Furthermore all are nationally and internationally renowned for their work, which challenges and amplifies the understanding and practice of psychotherapy in an Australian context.”
Pictured are ngangkari Iluwanti Ken, Naomi Kantjurin and Maringka Burton (photo by RHETT HAMMERTON) and Toby Ginger, Rupert Peter and Andy Tjilari (photo by ANGELA LYNCH). Both courtesy NPY Women’s Council.