By MIKE GILLAM All photos © Mike Gillam When people ask, I describe myself as a refugee from Melbourne, and my teenage years in horizon stretching...
Read more
Issue 11

Alcohol!  Alcohol!  Alcohol! Here we go again. It’s not often I find myself agreeing with Barb Shaw, however it’s about time the endless pointless circular debate about alcohol abuse and restrictions reached the blatantly obvious and only conclusion that will bring it to an end.

Ryder case: 'We can learn from this' 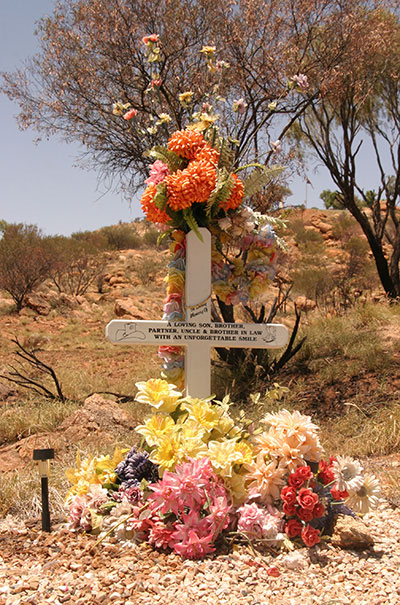 The death of Kwementyaye Ryder

Early last year an article by two Australian academics began circulating on the internet, proposing that the prison sentences passed on the five men convicted of the manslaughter of Kwementyaye Ryder – seen to be too light – were a "consolation prize" for their "whiteness". They painted a portrait of a "frontier town" where "if Aboriginal people are no longer formally prohibited from remaining within town limits after dark, their places remain on the fringes of Alice Springs: among scattered ceremonial grounds or as presences to be monitored and moved on at the edges of malls and souvenir shops, in dilapidated and dangerous town camps, and in the shadowy, uncertain shelter of the dry river bed".

The five, in the events of that night, were  "re-animating their own ancestral rituals of white violence", they argued.  The tragedy of Mr Ryder's death was "one more instance of racist violence and assault inscribed with the trauma-memory of exterminatory massacres".

The authors, Suvendrini Perera (Curtin University, Perth) and Joseph Pugliese (Macquarie University, Sydney) were commended for their dissection of "the white power play of the NT justice system" by Ray Jackson, President of the Indigenous Social Justice Association, to whom their article was dedicated. Mr Jackson asserted that "had the perpetrators been Asian, Muslim, African or indeed other Aborigines, then it would be a different story".

All of this struck me as a particularly unhelpful and often quite wrong-headed analysis of the events, their social context and the way in which they were dealt with in the court and by the community at large. It also flew in the face of the public statements of the Ryder family: their call for calm as the justice process began in August 2009, their acceptance of the verdict and sentencing when it drew to an end in April 2010, and the comment from family spokesperson Karen Liddle that the community could learn from these events.

In this spirit I worked with Mark Finnane, my brother and an academic himself with the ARC Centre of Excellence in Policing and Security at Griffith University, Brisbane, to write an alternative analysis of these events. KIERAN FINNANE and MARK FINNANE comment.

Pictured: The memorial to Kwementyaye Ryder at the place where he died, Schwarz Crescent, Alice Springs.