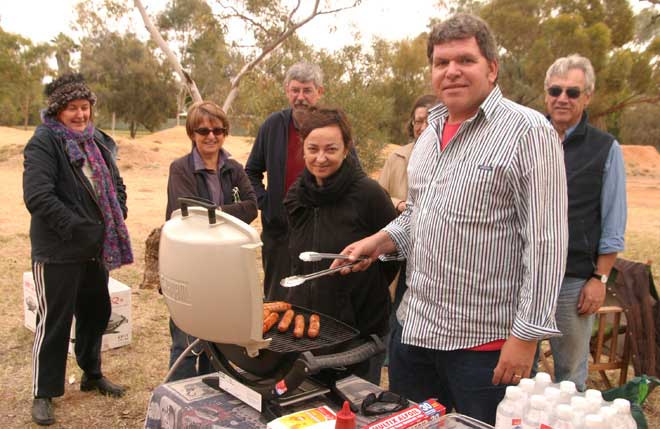 Rowan Foley and wife Michelle with supporters – from left, Andre Burgess, Sandra Ball, Andrew Ferguson, Barbara Ferguson (obscured), and Paul Acfield – at a community barbecue where he wanted to hear from Greatorex residents about their concerns.

Labor candidate for Greatorex Rowan Foley has chosen a possible future uranium mine at Angela Pamela, 23 kms south of Alice Springs, as the point of difference between him and Country Liberals incumbent Matt Conlan. Apart from the "I love Alice" tag, opposition to the mine is the dominant message of Mr Foley's initial campaign flyer.

As a core campaign message it seems to turn back the clock to the 2010 Araluen by-election campaign when the Labor Government, a little more than a week out from polling day, announced it would not allow a uranium mine to proceed so close to Alice Springs. Labor candidate Adam Findlay claimed that the government had listened to the views of the electorate but any bounce for him was nullified by the Country Liberals following suit, and their Robyn Lambley going on to win the by-election.

How much currency does the issue have now? With the Territory Labor Government on a knife edge, relying on the vote of independent MLA Gerry Wood, every seat counts. Labor has obviously judged this as an issue where the Country Liberals (CLP) are exposed in Alice Springs and especially in the seat of Greatorex. KIERAN FINNANE talks to Mr Foley and to independent candidate Phil Walcott, who is also opposed to a uranium mine so close to town. CLP incumbent Matt Conlan did not respond to the invitation to answer questions.