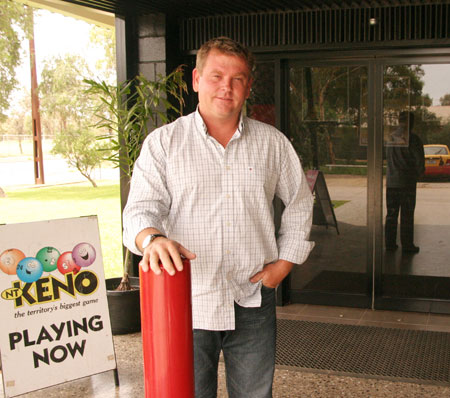 "It's hard to stay positive," says businessman Geoff Booth, manager and owner (with partners) of two licensed venues that have experienced a shocking run of break-ins. Town & Country, a bistro in the mall, was broken into in the early hours of this morning, twice. Club Eastside was the target of a ram raid in the wee hours of March 8, while Town & Country, also had a rock through the window, just a few hours later.

On that night Mr Booth (pictured at left with bollard protecting the club's entrance) was called into Club Eastside at 1am, went home at 3.30, was called into Town & Country at 4.30, then went home at 5.45. In neither case did the police attend – the night of March 7 and 8, as we know, was a busy one in Alice, for all the wrong reasons.

Town & Country was attacked again in the early hours of March 11. On all occasions thieves took a few bottles of liquor and some RTDs – of insignificant value alongside the damage they caused .

A ram raid of a few weeks ago (pictured below) caused $10,000 worth of damage to the club entrance, prompting the installation of the red bollard. Five more bollards have now been installed to protect the front wall of the club. The raiders used stolen cars, says Mr Booth.

By anyone's standards, these are intolerable conditions in which to do business. But Mr Booth, who came to town 13 years ago as a golf 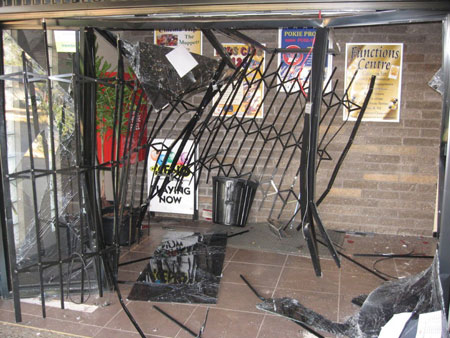 professional to work at the Golf Club, remains resilient. He has put his hand up to run for council. A leading figure in last year's Action for Alice campaign, his views on law and order are what you would expect: he stands for zero tolerance; he considers the outgoing council and Mayor Damien Ryan have failed the community on this issue; temporary solutions like Operation Thresher are only "bandaid solutions and short-term fixes if a few weeks later everything is turned upside down again", he says; council has to make every possible effort to lobby the NT and Australian Governments for a longer term strategy and resourcing.

Yet he admits to not having all the answers and understands the importance of listening to different groups, having "everyone at the table".