One of the draw-backs of this year’s excellent rains is that they are providing a boon for buffel grass, declared a weed in South Australia but mostly ignored by the NT Government.

People heading out into the West MacDonnells this weekend will note that most of the 135 kilometres to Ormiston, for example, is thick with the destructive introduced plant on either side of the road.

There is no indication that any eradication is under way although the current phase of vigorous growth is ideal for control.

What’s more, there are some 600 inmates in the Alice Springs prison, at least some of whom could be gainfully employed there, saving our prime asset from ongoing damage.

The Aboriginal owners of the national park, and the NT Government which is responsible for its care and maintenance, clearly couldn’t care less.

We raised these matters first on February 2 – and we’ve had lots more good rain since.

After repeated enquiries the only advice we received from the Department of Environment, Parks and Water Security was a snippet from a report which makes clear the damage being done: “Introduced buffel and couch grasses have invaded and dominate large sections of the river banks to the almost complete exclusion of native understory species.

“Management of both grasses is critical to minimising loss of river red gums and encouraging return of native species.”

Above: The popular walk to the Ormiston look-out after the 2019 fire (at left) and last weekend: The soot and ash have been washed away but the country is far from having recovered. PHOTOS Kieran Finnane.

That, combined with the scandalous mishandling of the 2019 fires which burnt half of the park, would suggest an all-out effort at the moment.

According to the only information provided, this is what the department is doing:

• “Develop a fire and vegetation management plan.” We asked for it, still haven’t received it.

• “Expand support the existing efforts undertaken by Alice Springs Landcare between Gosse Street and Stott Terrace on the eastern bank and by the Olive Pink Botanic Garden between Stott Terrace and Tuncks Road.”

What about the 2,069 square kilometres of the West Macs?

These are the questions we put to the department on February 2: “This time, after good rains, is the best to fight buffel grass.

Plus google the Alice Springs News site for extensive coverage of the buffel grass invasion over decades.

Alex Nelson writes: Attached is a cover image from an old (circa 1970) Department of Interior promotional brochure for the Stuart Highway – except it’s instantly recognisable as Larapinta Drive just west of Alice Springs!
Seems like governments and bureaucracy always fib to the public in the NT … but what’s interesting is the vegetation on either side of the road, before buffel grass took hold. 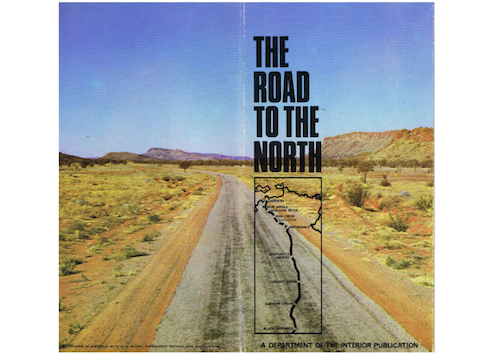