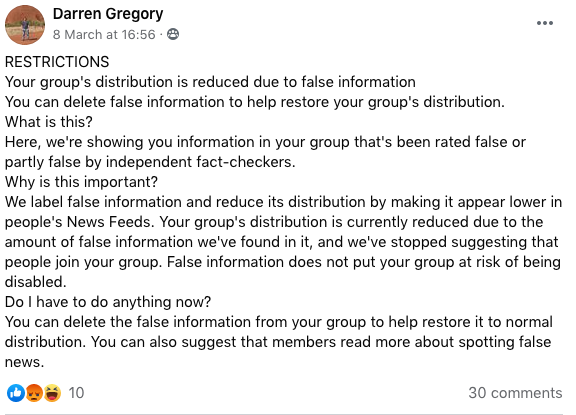 By JULIUS DENNIS
The largest Facebook group in Alice Springs, the private “Alice Springs Community Open Forum”, has been slapped with a distribution restriction from Facebook for too many posts containing false information.
Facebook has also said that they have stopped suggesting people join the group.
Admin of the group, Darren Gregory posted on Monday afternoon that he had received communication from Facebook that the “group’s distribution is reduced due to false information” which appeared on the group’s page.
The tech giant also provided examples of the posts in question, but these posts were not shared by Mr Gregory, although they are not hard to find.
At least they weren’t. It seems that along with the distribution limitation, these posts containing false information have gone from flagged to deleted.
A piece of advice from Facebook in its communication with the page admin was: “You can delete the false information from your group to help restore it to normal distribution. You can also suggest that members read more about spotting false news.”
It is unclear whether the admin took the advice or the posts were taken down by a higher power.
As has been reported by the News, the group has had a clique of high volume posters who subscribe to the views of the American far right and other conspiracy driven “news” providers for some time.
These posters are by no means the only participants in the group — it has over 15,000 members — but it appears that they may have hindered the group’s ability to appear in news feeds.
In a blog post by Tom Alison, Facebook’s VP of Engineering, Facebook promised that even if admins choose “to make a group private, they have to play by the same rules as everyone else”.
Facebook does this through a mix of AI detection and human fact checkers, a system that can have pitfalls such as those delved into by Renew Economy’s Giles Parkinson, but is widely recognised as a step in the right direction for cleaning up the platform.
For now, Facebook says that the group is not at risk of being disabled, but whether it remains a useful tool for the Alice Springs Community in this capacity is unclear.
Facebook
Twitter
Pinterest
WhatsApp