A community designing their own future

One of the fundamental conditions for effective democracy is that the people who have to live with the outcome of decisions should be the people making them. Usually we delegate the decision-making role to elected representatives, but sometimes they are not up to the task, or decide the issue is too thorny. As reported previously in the Alice Springs News, this opens the way for “mini publics” to step up as a way for community to have a part in the decision making.

The Canberra Alliance for Participatory Democracy (CAPaD) sees mini publics, known also as citizen juries or citizen assemblies, as one method that allows community input to the decision making process. They have been used extensively, for instance in Ireland to resolve the issue of abortion law reform and in France to recommend climate change policy. In East Belgium a standing community assembly recommends to the government what issues the people want action on in the coming year. The OECD has identified that minipublics are one of the ways of the future for strengthening democracy, looking at over 200 international examples.

The usefulness of citizen participation is that it:

In the ACT, CAPaD observed the citizen juries that the ACT government ran in 2017 and 2018 and with ACTCOSS came up with a set of criteria that would indicate how a successful public deliberative process would work. We have published our reflection on how effective we think that process had been.

In brief, we think that this exercise confirms that:

Further, in line with international experience, it is important that these tools are not used politically to justify an already made decision and that there is a fair dinkum commitment by government to either carry out the people’s decision or publicly explain why they did not.

The power of using these participatory and deliberative methods in Alice Springs is that it opens the way to a whole range of sectors from the community to come together to listen, discuss, consider and recommend to council what they collectively think needs to be done for themselves.

Starting with less complex issues, for instance shared use of Albrecht Oval, may help build confidence in the community and the Town Council about how the process works. More complex issues, such as what to do about young people after dark, can come later.

The framing question is important. In regards to youth, for example, it should not about a youth curfew, yes or no, or stopping property crime, but helping multiple sections of the town come up with a way to manage an issue that helps everyone.

Finally, it is important that the use of mini publics in Alice Springs be monitored and evaluated so that residents can learn from each one and build capacity to use them to better effect in future.

Image at top: At present community involvement tends to be sporadic and on single issues, such as this meeting of local residents and possible future users about Newland Park. Photo from our archive. 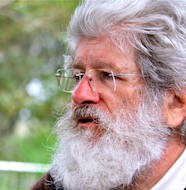 Peter Tait is the convener of the CAPaD. He has been a General Practitioner for 36 years, 30 in Aboriginal health in Central Australia. He was the 2007 RACGP GP of the Year and Public Health Association Australian Sidney Sax Medalist in 2017. He achieved a Masters of Climate Change at ANU in 2010. He is an Adjunct Senior Lecturer at the ANU Medical School.