Skating enterprise wins award for its contribution to youth 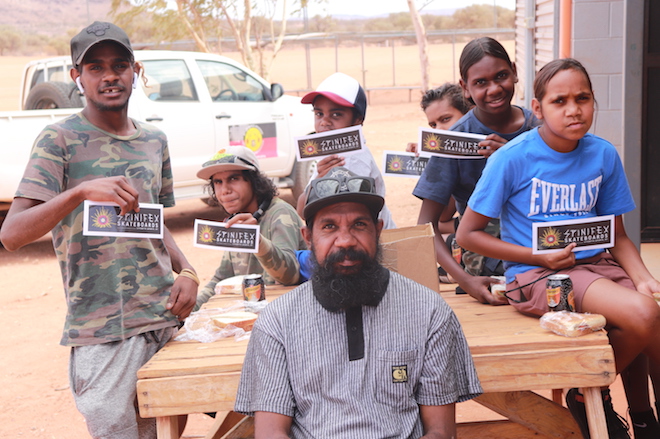 Spinifex Skateboards – homegrown in the Eastern Arrernte community of Ltyente Apurte (Santa Teresa) and launched in Alice Springs in July – has capped off its inaugural year with an NT Human Rights Award.

A social enterprise of the Atyenhenge Atherre Aboriginal Corporation –“TripleAC” –  Spinifex Skateboards was the brainchild of Traditional Owner and skateboarder Nicky Hayes (above, centre), backed by TripleAC manager Georga Ryan and a group of their friends.

Nicky had years behind him as a competitive and sponsored skater in Adelaide and returning home, became the first accredited Indigenous skate-boarding instructor in the Centre.

At Ltyentye Apurte he and his backers set up what is likely the only indoor skate park in a remote community.

Soon the youngsters he coached were ready to head off with him to Brisbane on a First Nations Skate Tour, strongly supported by fundraising efforts in the Centre.

That was just last summer. By winter the vision had expanded to the launch of a brand and a line of merchandise: the boards and clothing have sold like hotcakes.

Georga says their online sales are constant and the opportunities are flowing: “So many people reach out to us.”

Nicky was engaged by the Alice Springs Town Council as judge and instructor for their skate festival during the school holidays; Bunnings paid Spinifex to do a pop-up park and painting stall during NAIDOC week; a number of remote communities have asked for week-long skate programs in the coming school holidays; a Canadian film company is doing a mini doco; and a few more opportunities are still under wraps.

With Nicky unable to travel for family reasons, community members Ruot Flowers and mum Farah (both of whom went on the skate tour last summer), Stony, and Georga travelled to Darwin where last night they accepted the Fitzgerald Youth Award for Spinifex Skateboards as organisation winner.

The individual Youth Award winner went to Jordan Conrad who worked with young people in Tennant Creek to create a mural at the NT Legal Aid Commission there, sparking a conversation in the community about justice, youth and respectful relations.