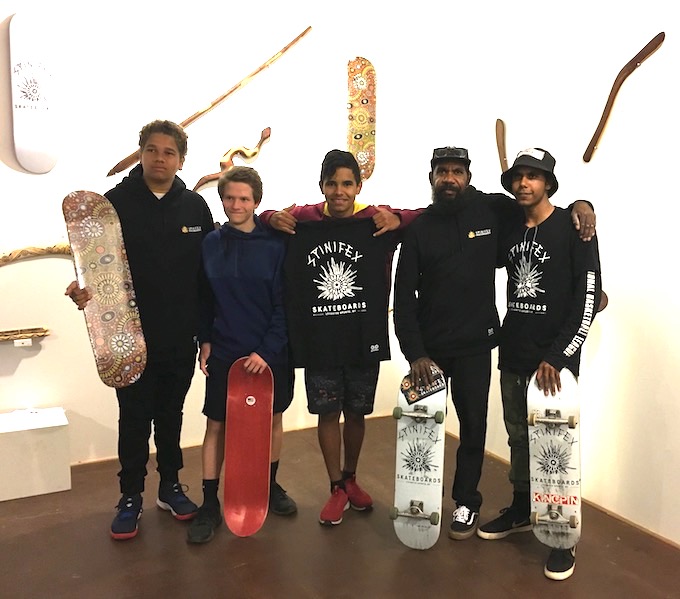 Sport, food, entertainment, art, business, black, white, music, IT, drink, people with a spread of backgrounds, trade – all in one place?

If you weren’t at Watch this Space last night you missed it: Alice Springs at its best.

It all revolved around skating and skateboards: Riding them, making them, promoting them and using them for bringing people together, making friends easily.

Some 150 people were at the launch of a venture bound to add to the buzzy community of Ltyentye Apurte (Santa Teresa).

It is making a name for itself around Australia – and beyond – selling boards sporting The Centre’s famous art form of dot painting, and others.

Nicky Hayes is determined to see to it.

A niece of his produced the original painting – and no doubt there will be more – attracting buyers equally who want to skate them and hang on the wall.

With this comes merchandise, Tshirts and jumpers, which were selling briskly last night.

Some 15 Australian companies have not only shown interest but provided raw materials: Outback and Indigenous ownership combined is a powerful drawcard.

Carving out a place in international commerce has it difficulties: Australia no longer produces skateboards, as it does not make motorcars.

The boards come from the USA which has its own problems, says Georgia Ryan, who works for the AAA Corporation at Ltyentye Apurte.

But that’s not insurmountable: “Spinifex Skateboards is online, Christmas is near and people can’t travel and that’s a promising formula for commercial success.”

The skateboard company funded a trip for six boys and two girls to Queensland earlier this year who took part in a competition.

“Their adrenaline was pumping. They had the support of the other kids, cheering them on them, shout outs on the microphone,” says Ms Ryan.

Surfing and a rain forest walk was a first experience for the kids from The Centre.

There was common ground for them with children they never had an opportunity of meeting before.

Clearly, skating can be more than a sport.