Youth Hub out, Empowered Futures in

The Town Council is changing the focus of its plans for young people. The much-spoken of Youth Hub concept has been dumped in favour of a Town Council Youth Space. This does not seem to be, however, a drop-in centre.

Instead it will house council’s “Youth Programs team” and be the base for delivering its activities such as a Youth Employment Apprenticeship Program, the Phoney Festival, the YAG (Youth Action Group under a new format) and the “YEP”.

These details are included in a report to council by Director of Community Development Kim Sutton (pictured below) and apparently reflect the discussions by councillors and officers in the forum of November 9.

The “YEP” stands for Youth Empowerment Program about which Ms Sutton’s report contains no detail. Its name would suggest that this is the program associated with a Baha’i entity, which has caused Council CEO Robert Jennings, being also associated with the Baha’i community, to declare a conflict of interest in the matter.

In response to enquiries by the Alice Springs News in September this was how the program was described:

“The youth program was suggested by elders and community groups, as a proven program with strong community support.  It offers a world-renowned program that has been implemented both internationally and in Central Australia.

“With a fundamental purpose on [sic] empowering young people to improve, this program has many demonstrated benefits and is a fresh approach to the traditional youth programming run by Council.” [Emphasis added.]

Requests for further information have been turned down.

“Empowering”, “empowered” , the vocabulary suggests that the YEP’s principles will be pervasive of council’s whole approach, and yet the public continues to be kept in the dark, beyond this vague statement, about the program’s framework and credentials. 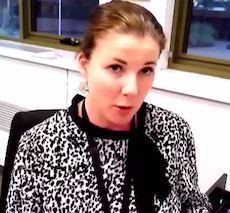 It is not clear whether a “Youth Council Camp”, also referred to as a “school holiday bootcamp”, is part of the YEP. The first such camp is planned for September 2021 school holidays.

The first intake for the Youth Employment Apprenticeship program will not be until January 2023.

It plans to have the youth space “scoped” by June 2021 and opened by September, although this will depend on the location of a suitable space. The report talks about the former Tourism Central Australia building, the south-eastern corner of Traeger Park, the old Pool House building or a brand new facility as possibilities, estimated to cost between $500,000 and $2,500,000.

In the more immediate term, Ms Sutton recommends that council enter into an MOU with the Arrernte Community Boxing Academy and find them a suitable council-owned base in time for the summer holidays. The academy was formerly housed in the boxing shed at Traeger Park until it was condemned.

Ms Sutton also recommends that council approve an additional $75,000 from capital infrastructure reserves for the delivery of expanded youth programs and materials, and that council facilities be made available to local youth agencies and organisations, via the lnteragency Tasking and Co-Ordination Group.

Council’s existing (and by all reports successful) summer holiday programs will be delivered again, with some new features such as “Arrow Tag” on the grass fields at the Town Pool.

The various recommendations contained in the report will come before council in tomorrow night’s meeting. More then.

Meanwhile, Ms Sutton’s document says council supports the announcement of “a 24-hour Youth Hub” at 2 Railway Terrace, opened as a pilot project until March 2021 by the Territory Government. The Railway Terrace premises are the home for its Youth Outreach and Re-Engagement Teams (YORET).

According to Ms Sutton’s report, the facility will be open from 3pm Friday to 6pm Sunday, before running 24/7 during the summer school holidays: “This space provides fun activities after school and in the evening such as games and sports and quieter (less enticing) activities during school hours and overnight.

“They will coordinate with the Tangentyere night time buses (2:15am last departure). No accommodation is offered at this facility and those needing [sleeping] accommodation will be supported to be referred elsewhere.”