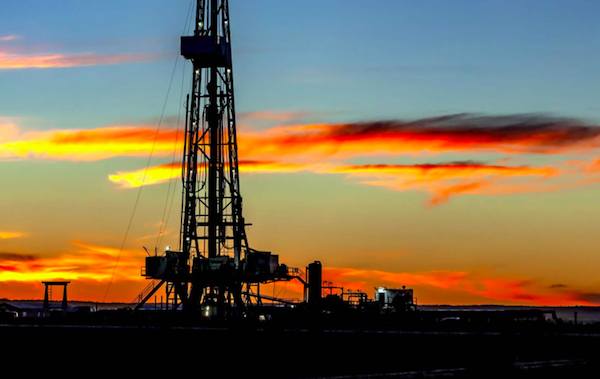 “No fracking in the NT” is a brave promise by the Territory Alliance but one that may be hard to keep if it wins government at next week’s election.

There is a clue in the second sentence of the party’s policy position paper: “Under Territory Alliance there will be no more fracking in the Northern Territory.”

Not any fracking or no more?

This comes next: “Existing exploration licences will not be renewed, and no more production permits will be issued.”

It seems clear this could only happen with legislative changes that would expose the horrendously indebted Territory to massive compensation claims from the oil and gas industry.

Says the Department of Primary Industry and Resources, responding to questions from the Alice Springs News: “When a commercially viable petroleum discovery is made exploration permit holders have a legal right to a production licence.”

There are few production leases: A producing oil and gas field (OL4) at Mereenie west of town; producing gas fields at Palm Valley (west, OL3) and Dingo (south of town, L7); and a gas discovery (RL3) at Ooraminna, also south.

But there are huge areas south and north-east of town under exploration permits (see purple areas on the map). 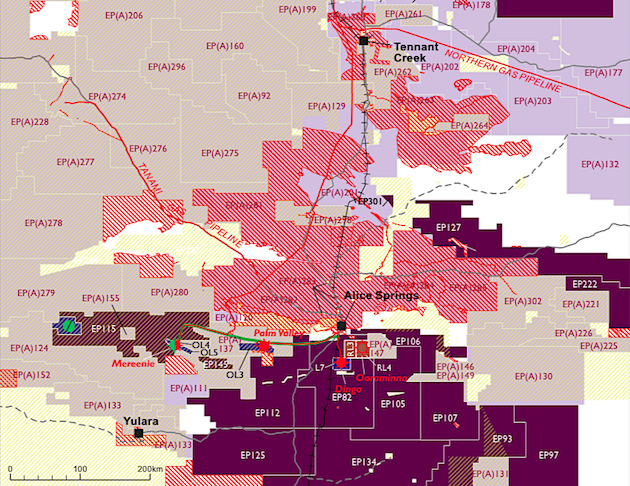 There are conditions for production licences but they are clearly not insurmountable.

Says the department: “An exploration permit holder must apply for a production licence and undergo assessment including an ‘appropriate person test’ as required under the Petroleum Act.

“A production licence is a form of tenure, it does not solely authorise the holder of the licence to produce petroleum for commercial operations.

“A licence holder must also seek activity approval to drill production wells or undertake production activity under the Petroleum (Environment) Regulations, amongst other approvals.

“A production licence is granted for 21 or 25 years in accordance with the Petroleum Act.”

The Australian Petroleum Production and Exploration Association has declined to comment but a source speaking on condition of not being named says if a Territory Alliance government rules out fracking as part of the conditions for production, the issue would almost certainly finish up in court: Companies have explored in good faith with Gunner government approvals, after it lifted the moratorium it had campaigned on during the 2016 election.

Meanwhile according to the Australian LNG Monthly lower oil prices are having a significant effect on Australian LNG with extended maintenance, continued cargo deferrals, lower prices and asset write-downs. LNG revenues are down 52% on a year ago.

We have asked Matt Paterson to comment. He is the Territory Alliance candidate for Namatjira, where significant areas are under exploration permits.

Photo at top is part of the cover of the party’s policy position paper.

Thank you for the opportunity to respond.
To be clear, I do not support unconventional hydraulic fracturing otherwise known as fracking.  My view is that the risk is too high and there are too many unknowns in terms of the environmental effects of this practice in particular around the effect on ground water.  My position on this won’t change.
NT Government monies and effort need to be focused on bringing mines that have been otherwise delayed online, and to attain a greater benefits from traditional gas industry activities.
In addition I am focused on supporting and preparing our tourism industry to be ready with the best possible offering and best possible marketing package for 2021.
If people hadn’t noticed four years of the current incompetent Gunner Labor Government have delivered us an economic crisis.
As much as Mr Gunner and Co want to bang on about how great they are for following health advice, which all governments did, in terms of COVID-19, the fact is that Labor have no plans to get us out of this crisis but Territory Alliance does.  And our plans don’t involve pouring money into fracking but rather on what will deliver benefit to the Territory.

Dates of explorations permits (see map above) being granted, renewed or surrendered, provided by the Department of Primary Industry and Resources:–