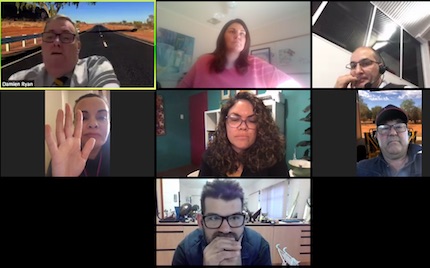 UPDATE, 1.50pm: The Town Council will challenge any attempt by the NT Government to compulsorily acquire Anzac Oval. Their resolution to this effect followed  more than an hour’s debate at today’s special meeting. The vote in support of  the resolution was unanimous. Mayor Damien Ryan and Councillor Glen Auricht were apologies. More later.

Minister Dale Wakefield may be “ready to pull the trigger” on compulsory acquisition of Anzac Oval to allow the government’s plans for the national Aboriginal art gallery (NAAG) to proceed, but Alice Springs Town Councillors are pushing back.

In a media statement today Cr Marli Banks challenges the Minister’s warlike approach, saying that it has sent “shock waves through the community at a time that people are already experiencing high levels of stress as a result of the Covid-19 pandemic”.

Together with Crs Catherine Satour and Eli Melky she has called for a Special General meeting of council (it will be the second this week) to address the issue.

“The community wants our leaders to take charge, but not take over. To go to war with the Northern Territory Government is not in the best interest of our town. We need to be measured and mature, and we need to take the time to get this right. We are in unchartered territory and we need to work together to ensure we can sustain our economy and afford our future.”

The Alice Springs News understands that there has never been compulsory acquisition of land owned by a local government authority in the NT.

Council has received a legal opinion on the issues. No doubt its content will become clear in today’s debate.

The meeting will be chaired by Deputy Mayor Matt Paterson, appropriate given Mayor Damien Ryan’s CLP candidacy and the politicisation of the gallery project.

Says Cr Banks: “Until resolved differently, the position of council is clear, build the NAAG, but leave the oval intact.

“Decisions pertaining to stimulus projects aimed at recovering the Northern Territory economy should not be rushed.

“A collective view should be measured and be representative of the community. Hasty decisions should be replaced with sound judgment and ideally be backed by the community who are ultimately the drivers of the economy.”

“The council has to date been unanimous in supporting a National Aboriginal Art Gallery to be built in Alice Springs.

“Anzac Oval is a special community space used regularly for playing sport and holding large community events such as Carols by Candlelight and Masters Games opening and closing ceremonies.

“There is a rich history with the oval hence the name Anzac. This is a special place placed under threat by a Minister and her Government who are unwilling or unable to accept the overwhelming community love for this open space.

“We look forward to meeting with fellow elected members today to discuss this unexpected and unwanted rise in hostilities at a time when our community is dealing with a pandemic and should be focused on the recovery and safety of our community.”

A letter from Minister Wakefield (Territory Families) and Minister Lauren Moss (Tourism and Culture), dated 8 April, while expressed in more conciliatory terms, links the project to pandemic recovery.  The Ministers say they have “made clear” to the Australian Government that the gallery project is “absolutely critical” to the recovery of the town and the region.

They again ask the council “to endorse” the Anzac Precinct as the site for the gallery, including Anzac Oval. The letter does not address the sticking point for council: that they need to see evidence of traditional owner support for the Anzac Precinct site. It does, however, refer to a previous letter from Minister Wakefield, dated 9 March, which addressed the issue in general terms, providing no evidence as such.

The News will report this afternoon from council’s special meeting.