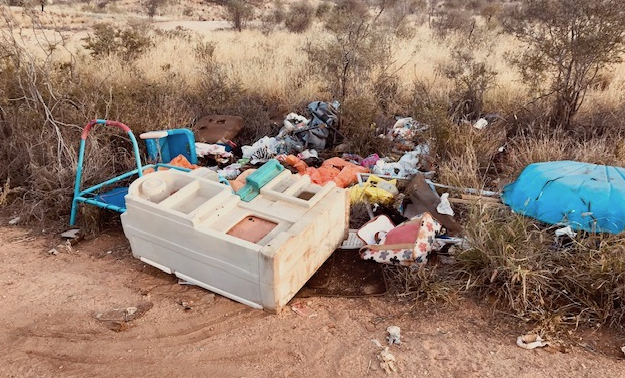 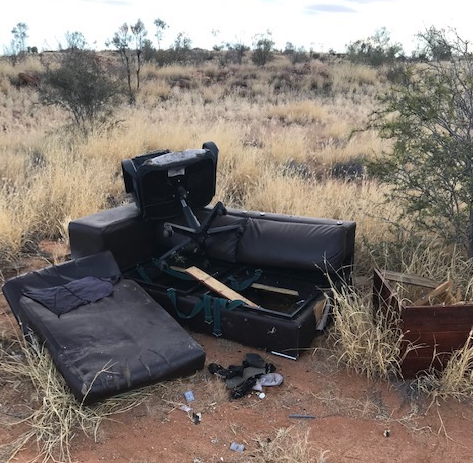 A nationally acclaimed painter and writer whose books and canvasses feature the hills east of Alice Springs is outraged about the way locals are treating this picturesque landscape.

Rod Moss has photographed 25 sites where household and construction rubbish has been dumped, and given the photos to the News.

We passed them to the Town Council which has forwarded them to the NT Department of Infrastructure, Planning and Logistics (DIPL).

Says Mr Moss: “For 15 or more years I’ve been roaming these tracks sourcing cans and bottles to recycle and supplement Basic Card monies for campers at Whitegate.”

These people are the subject of the book for which Mr Moss received Prime Minister Julia Gillard’s award for non-fiction in 2011, The Hard Light of Day. 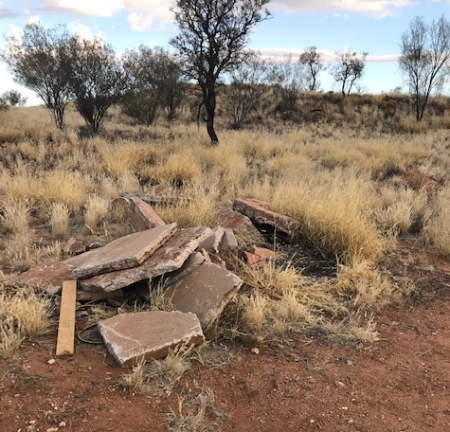 He says: “Drinking camps have long been popular in the naturally formed valley cul-de-sacs. So too have stolen cars been dumped and incinerated, one of mine amongst them.

“I’ve not seen anything like the rubbish people have been dumping on these tracks during the last 18 months.

“The ‘green shirts’ from Correctional Services used to do a bit of a clean up. But it’d take one almighty sweep to contend with the present unsightly mess. And on the Queen’s Land too!”

We asked the council yesterday: “What will you be doing about this? Why has so much rubbish been allowed to accumulate? Has anyone been prosecuted?”

We asked the department at 3pm yesterday: “What will you do about a report of dumped rubbish east of Alice Springs referred to your department by the Alice Springs Town Council today.” We expect to receive a reply on Monday.

A spokesman for the council says it has invited the NT Government “to partner in developing a pilot strategy for the management of illegal waste in the Alice Springs area”.