Now it’s greener on their side of the footy fence 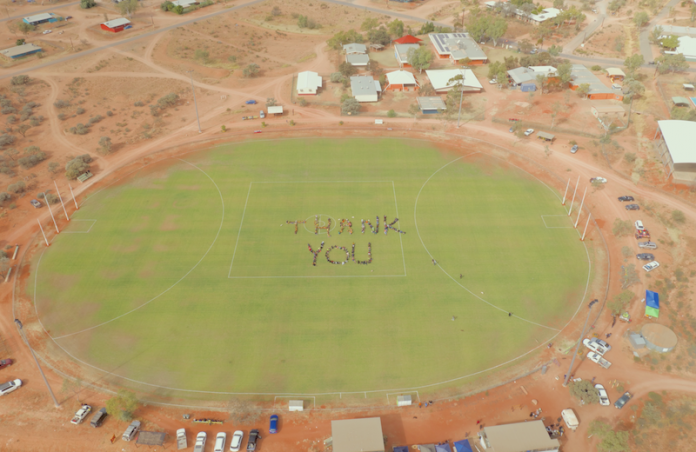 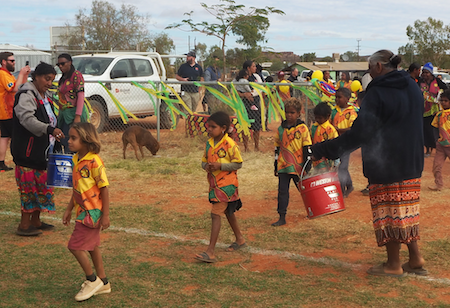 Santa Teresa was a ghost town on Thursday afternoon, with the whole community joining in the celebration down at the football ground for the official opening of the new grass oval.

The project has been four years in the making, with help coming from all over the community, and major support from the Melbourne Football Club (MFC).

The stunning green grass stands out vividly from all that surrounds it, giving it the appearance of an oasis, surely the greenest thing between Alice and the Top End.

It was a festive atmosphere around the ground, with a BBQ, food and art stalls, and hundreds of people there to enjoy the big day.

The primary school, which backs onto the oval, brought all of the kids down for the afternoon, who were rapt to be there, and even more excited to get out and run around on the grass.

The ground was blessed by the local church, and community elders Annie Young and Agnes Alice conducted a smoking ceremony, then elder Phillip Alice officially opened what he called “the MCG of the desert.

“This oval belongs to us all. Let’s use it well, look after it and respect it.”

Then it was time for the new ground to get it’s first taste of footy boots. A game was organised between the senior side and the under 18s of the local team, Ltyentyies.

A fair bit of bragging rights went along with getting the first goal and the first win on the new ground, so the game was set to be a competitive contest.

But first they had to clear the half dozen or so dogs that had snuck onto the oval to investigate the new surface. After some mildly successful chasing and calling,  Mr Alice decided it was good enough to play.

First goal went to seniors player Ezekiel Poulson, who said it was an exciting moment when it went through, remarking at how good it felt running around on the grass.

His team went on to win the day, but it was clear that there are plenty of talented juniors coming through the ranks.

According to the players and AFL NT staff, the ground doesn’t just look good, they say that the project team have managed to make a surface that is seriously good to play footy on and, compared to the dirt ground that preceded it, minimising the risk of injury and allowing for much better development of skills.

The game was a bittersweet moment, as it was meant to be played by a mix of the teams, along with some of the MFC professional players.

Due to the COVID outbreak in Victoria no one from the Demons was able to get to Santa Teresa for the big day, a fact which Mr Alice used to implore his community to go out and get vaccinated.

“It really started from a throwaway remark,” said Atyenhenge Atherre Aboriginal Corporation’s CEO Ellie Kamara about how the project began.

“Everyone thought it was a good idea so we kept on rolling with it. We put it to the Melbourne Football Club and they liked it and wanted to be involved and help out, so that’s what happened.”

Ms Kamara says she has been amazed at the amount of support they have received, MFC raised the money through their sponsors and supporters, with the NT government also kicking in.

The MCG donated some new goalposts and a mower, Alice Springs golf club and St Phillips School staff have been out to the ground to give advice on growing and maintaining the grass, and a whole range of locals volunteering their time.

Work started in earnest in late 2019, digging down to install new irrigation systems, then levelling off, building a fence to keep the horses out, and getting started on growing the grass.

It’s been a steep learning curve for those running the project, especially Matthew Kavanagh, who has taken on the job of looking after the ground.

It turns out there is a lot of work and knowledge in growing grass, irrigating, planting, mowing all needs to done just right, Ms Kamara says they knew very little about any of it when the project began.

Around 20 years ago there was an attempt to grass the oval, but elder Phillip Alice said they only managed to get a little bit of grass to grow. This time is different, thanks to some serious planning and dedication.

Another difficult part of the project has been keeping everyone off the grass for the last six months, to make sure the grass grew in properly, Ms Kamara, who lives right next to the oval, said the task fell on her shoulders.

“The kids were very patient, I live just next to it so every afternoon they’d constantly come up to me and ask if it was ready for them to run around on yet, and I’d have to tell them no not yet.

“But they were very good about it, very understanding but I reckon they think I’m the scariest person in the world now.

“About a month ago we decided it was time, and let them finally get out there, it was great to see how much everyone was getting out of it, and the last week or so since the teams have started training on it, there’s just been so many people around.”

Highlights from the footy, and the opening of the ground will be featured in a video shown at half time in tonight’s AFL match between Melbourne Football Club and the Brisbane Lions, which was originally scheduled to be played in Alice Springs before COVID interfered.

PHOTO at top by Andre Sawenko.