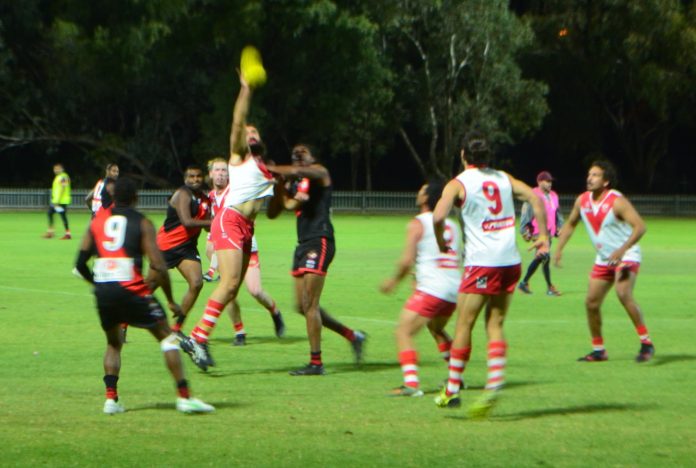 The Federals have moved into second spot on the ladder with a powerful win over West Alice Bloods under the lights at Albrecht Oval on Saturday night.

The Feds used their bigger bodies to advantage all night, making life difficult for the West mids and denying them their natural fast running game.

A goal in the opening minutes to ruckman/forward Daniel Gorry, standing about a foot above his opponent, threatened a very tough night ahead for the Bloods’ defenders. Strong arial marking and a goal to Copelan Ford made it look even tougher.

But the bloods were able to get things going towards the end of the quarter off the back of some brilliance from gun recruit Toshie Kunoth, who looked ready to take control of the game.

Two late quarter goals to Jaspar Wheeler saw the margin narrow to two points, but a bizarre decision to kick a torpedo down the ground with a minute to go from the bloods saw a quick turnover and another goal to Ford too see Feds bring a seven point lead into quarter time.

The second quarter was an even contest in the midfield, and West were finally able to get some run and carry going, with Kunoth scoring on the back of an end to end play from a kick in that got to the forward line with lightening speed.

The Federals were able to execute handballs well to maintain possession, finding good options to get them out of trouble.

While there was regular scoring from both sides, Feds were able to string a consecutive goals together by maintaining possession and waiting for good options before going inside fifty, extending the lead to 25 points at the main break.

It wasn’ t until 15 minutes in that we saw a third quarter goal, off the boot of West’s Jayden Dick. Kunoth went quiet after half time, with Patrick Coffey doing well to manage him out influence.

The ball changed hands through the middle of the ground for most of the quarter, Federals had most use of it but poor accuracy when they had a shot at goal saw the goals level at two apiece for the quarter with another goal just before the siren to the Federals.

With 29 points to make up in the last quarter, West lifted intensity, tackling hard and doing everything to get to the ball first, Kunoth found a way to the ball, and looked dangerous early on, getting his hands on the ball and scoring a goal.

Feds key defenders Robby Bartee and Dominic Forbes tightened up, and the neat kicking possession game took over and denied West the speed they relied on on to score, putting the game on ice for the last 10 minutes.