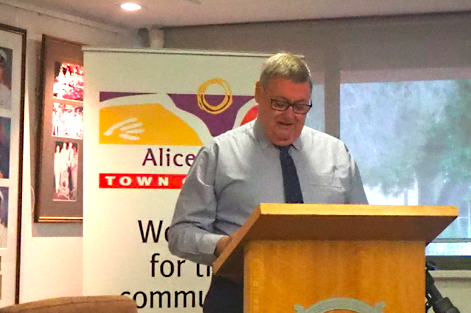 The Town Council will make a $3.4m dip into its reserve funds to balance the budget if a draft for it, announced today by Mayor Damien Ryan, is adopted.

This appears to be against the council’s own reserve funds policy which says they are to be set aside for long service leave, asset replacement, annual leave and an insurance claim reserve.

But Mayor Ryan said this is a practice that council has used before, and the draft was prepared under Department of Local Government, Housing and Community Development advice.

The current reserves are around $24m, though much of that is committed to projects and special funds.

Local Government, unlike other levels, is not able to introduce a budget with a surplus or deficit.

Rates, fees and charges will rise 2% but there will be no significant funding changes for programs or services if the draft is adopted. (A rate rise projected last year for 2021/22 was pegged at 5%.)

Mayor Ryan described the rate rise as fair, something the public can now judge before the June council meeting when the budget decision will be made.

He says that the rates needed to come up to cover costs to council, particularly wages of staff who provide services to the community.

This is the last rate change based on valuations made three years ago, so if there is a significant change to values next year then rates change accordingly.

Mayor Ryan said at today’s media launch: “A product we bought a year ago for a dollar now costs us a dollar twenty, costs have been affected throughout the pandemic.

“Steel for the lights at Albrecht [Oval], because of the delay back from the Minister’s table, went up hundreds of thousands of dollars.

“Product [costs] from around the world continue to grow, and we have to be able to pay for that.”

There are no allocations made in the draft to finance the 12 week traditional owners patrol trial that council supported in January, due to wrap up in the coming months.

The Mayor says they cannot commit funding to the program until they see the trial results, and have not made allocations from reserve funds to support the program if the findings are in favour of continuing the patrols.

“This trial was to provide the data to the Territory Government and the Federal Government going forward. If they deem it to be a success from our trial then we will be asking them to do it.

“We spent a quarter of a million on that trial, but it’s not our core business.

“I’ll be on the phone to both the Federal and Territory government if this proves to be successful.”

The draft budget documents indicate a focus on youth projects with an allocated $266,000, but CEO Robert Jennings said there has been a shift in focus to youth services rather than a youth hub.

Plans for the hub appear to be on ice for the meantime, though neither the Mayor nor made a definitive statement about its future. The Mayor said that the project was hard to develop in the last year due to COVID and other complications.

“These plans don’t get trashed, they just get rolled over into the next year’s budget.”

No money has been allocated in the budget draft to upgrade the town’s only skatepark.

The Mayor says this kind of infrastructure project funding is covered by grants, not funds from ratepayers.

He says it is a priority to address the safety issue that has recently resulted in the skate park being closed, but was unable to give a timeframe for when that might be resolved.

The increase in tourists expected to hit Alice Springs in the coming months will not have an impact on council’s earnings.

Meanwhile, support for local events like Wide Open Spaces and the Finke Desert Race will continue.