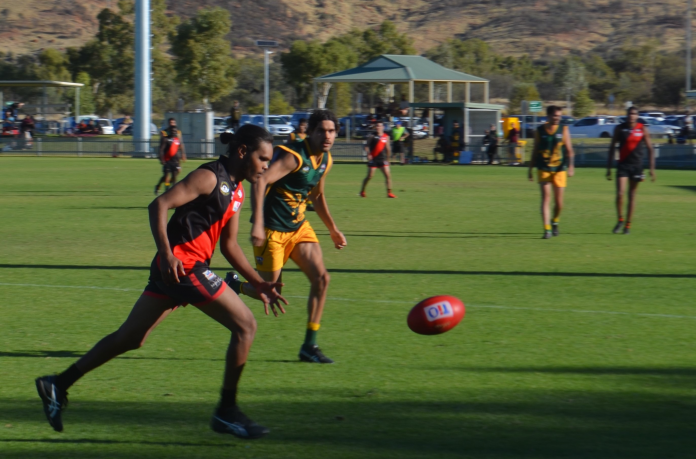 West have got their season on track with a win over Pioneers in the CAFL on Saturday, but poor accuracy in the final quarter gave the Eagles plenty of sniffs at a win.

The round four clash was a seriously fast paced affair, with both teams content to pit their midfield running games against each other, resulting in an open and entertaining contest.

Toshie Kunoth is cementing himself as one of the star players of the league with three goals and an enormous effort crashing through the midfield to win the ball.

Poor kicking in front of goal in the second half left the door open for a Pioneer comeback, but some classy midfield work kept the ball in the Bloods’ hands enough to starve the Pioneer forwards from stealing a victory.

Quick goals bombed from outside 50 by Kunoth and Denzel Anderson in the opening minutes got the game started on West’s terms. 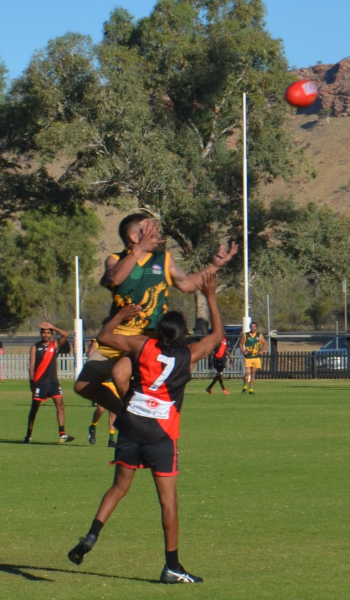 Both sides were shaky early on, with plenty of missed targets and skill errors resulting in easy turnovers.

Thomas Swan led a resurgence for Pioneer in the middle of the ground, using his lightning speed to break through setting up shots on goal from centre clearances, but the Eagles struggled to convert, only managing one major for the quarter.

Untidy work in the Pioneer defenders late in the quarter gave West some easy goals, and the Bloods brought a 23 point lead into quarter time.

Both sides tightened up their skills after the break, and the battle between silky quick mids from both sides took over, which was to continue for the rest of the game.

Marcus Hamilton showed class in the midfield giving his forwards good supply, who had lifted their impact and began piling on the goals towards the middle of the quarter.

This was met with much frustration from the West bench as they watched their defence get pulled apart, with players struggling to keep on their man and get the ball out.

The move to put Kunoth out of the forward line and back on the ball towards the middle of the quarter had a big impact.

West were able to regain control in the middle and find their way back onto the scoreboard, taking control in the last part of the quarter and putting a few goals to push the margin back outside two goals.

Tension in the game boiled over when Pioneer captain Jawoyn Cole-Manolis took his frustration out in an aggressive tackle, which West players took offence at, with a minor scuffle breaking out.

West forward Geoffrey Pareroultja found his second goal for the quarter to bring the score at the end of the half to a 23 point lead. Pioneers headed into the rooms frustrated to have seen no reward for their hard work after being just nine points down at one stage.

The second half became a game of shifting momentum, when the Pioneer mids were able to get control of the ball their forwards looked dangerous, with the big bodies of William Foster, Jamie Hampton and Cole-Manolis out-muscling their opponents in the contest.

Two early goals in the third to Clayton Walker tightened the scoreboard back up, but for the rest of the third neither team could use the ball effectively when it got forward, with terrible accuracy from West, who kicked one goal and six behinds for the quarter.

At the other end, tough defensive efforts at half back from Samuel Mader and Jackson Renzi kept the ball from making its way deep into the Pioneer forward line.

The Eagles were able to hit the scoreboard in the final minutes, and a kick after the siren for his third of the quarter saw Walker narrow West’s lead to 11 points.

Pioneer again had a good start to the last quarter with early goals, and the forward line looked ready to explode with Hampton giving absolutely everything to try and steal the win.

West were continuing their run of bad goal kicking, wasting many opportunities to put the game to bed. The desperation in the midfield from both sides was impressive, tackling pressure and physicality went through the roof in what had been an open running game.

The crowd could sense the game needed a hero, and there were plenty of spectacular and tough efforts that received much vocal admiration.

But in the end it was new recruit Toshie Kunoth who took control in the midfield, and finally managed to steer one home.

The game stayed tense until the siren due to desperation from the Pioneer forwards, but the West midfield stayed calm, out-classing their opposition and maintaining possession to seal the win.