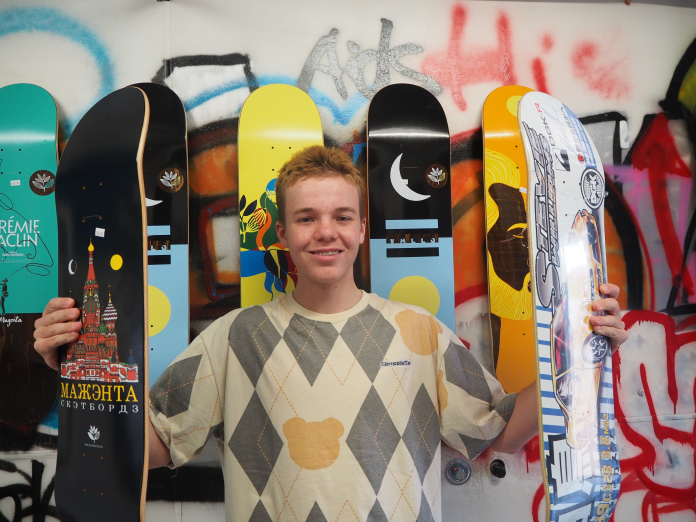 The local skate park might not be where you would think to look for budding young entrepreneurship, but that’s exactly where you will find Angus Pollitt, who has taken the big step of starting his own business at just 15.

In a shed at the end of the driveway in his parents home in Braitling, Angus opened Yert Skateboards for business last week, the only skate shop in town.

The high schooler has spent his recent time off learning how a business functions, designing a logo, was talking to suppliers, making connections, fitting out and setting up the shop. Or at least when he was able to keep himself from going out for a skate.

Angus is all in on making the shop work, quitting his two jobs at a supermarket and cafe to focus on the new business. 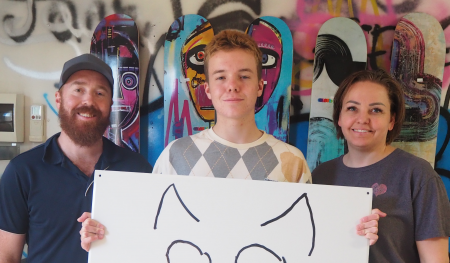 The closure of the only skate shop in Alice last year, and the impact it had on the community, gave Angus the drive to start his business.

Breaking boards or wearing out wheels and trucks is standard procedure in skateboarding, and with nowhere in town to buy replacements locals were stranded off the concrete for weeks waiting for parts to come in the mail.

Angus says that this also made it difficult for beginners to get a start: It’s too hard for beginners to figure out sizing, types of board and generally what they need to get started. He hopes to be able to help with that. He puts the number of skateboarders in Alice between 30 and 50, but says with easier access to gear and better facilities more will join in.

“I know a lot of lot of people who are wanting to get into it but stopped because of this situation we have in Alice.

“I skated as a kid, but stopped after my board broke, and I just couldn’t be bothered doing all the research.

“But once the other skate shop was open, I got my stuff from there. And that’s what got me back to skating,” says Angus.

“Skateboarding may seem really intimidating, when you see someone make an amazing trick and you can’t even lift the board off the ground, but once you get into it it’s so much easier than you think. And it’s fun as well, it can be a really good escape.”

Angus says he can put together a complete board for new skaters for around $120, a reasonably competitive price even compared to prices in cities.

There is a strong sense of community between skaters. Angus says he has had a huge amount of support from his mates at the park, as well as some bigger names in the skateboarding world.

Angus is stocking gear from Pass-Port, one of the bigger skating companies in Australia, and is expecting to have boards from local company Spinnifex shortly.

He has been amazed at how generously supportive of his business both have been, and plans are in the works with both for a pro skater demonstration event in Alice.

Though the young business owner has done an impressive amount of work, he says it would not have been easy without support and inspiration from his parents, Crystal and Joe (pictured).

It was a conversation that home got the idea in Angus’ head according to Joe, he had been telling his parents about the issue of the last shop closing, so told him he should open his own.

“From that point it just grew organically.

After being made redundant in 2014, Crystal had started her own business in the same shed, but due to its success she has since opened up in town. 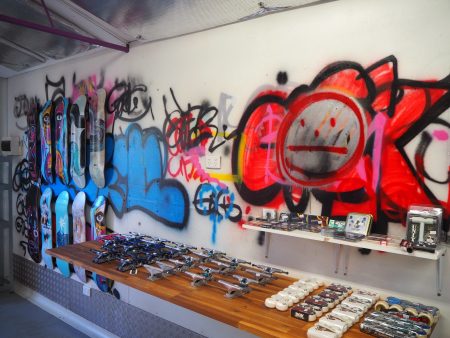 She says the space was there, costs were pretty minimal to get started and their son is going to learn a lot, as well as help out his mates and the skateboarding community, so they were happy to help.

Crystal and Joe say they have been impressed by how encouraging and helpful the skate companies, and all the skaters in town have been to their son.

“There’s a really nice sense of passing stuff on, not that I wasn’t expecting it but was it’s not really nice to see.”

They all agree that more effort from council to improve facilities for skaters would see the sport skyrocket in town.