Home Issue 12 Jakamarra Nelson, a fighter with a lot of charm
Issue 12Volume 26

Jakamarra Nelson, a fighter with a lot of charm 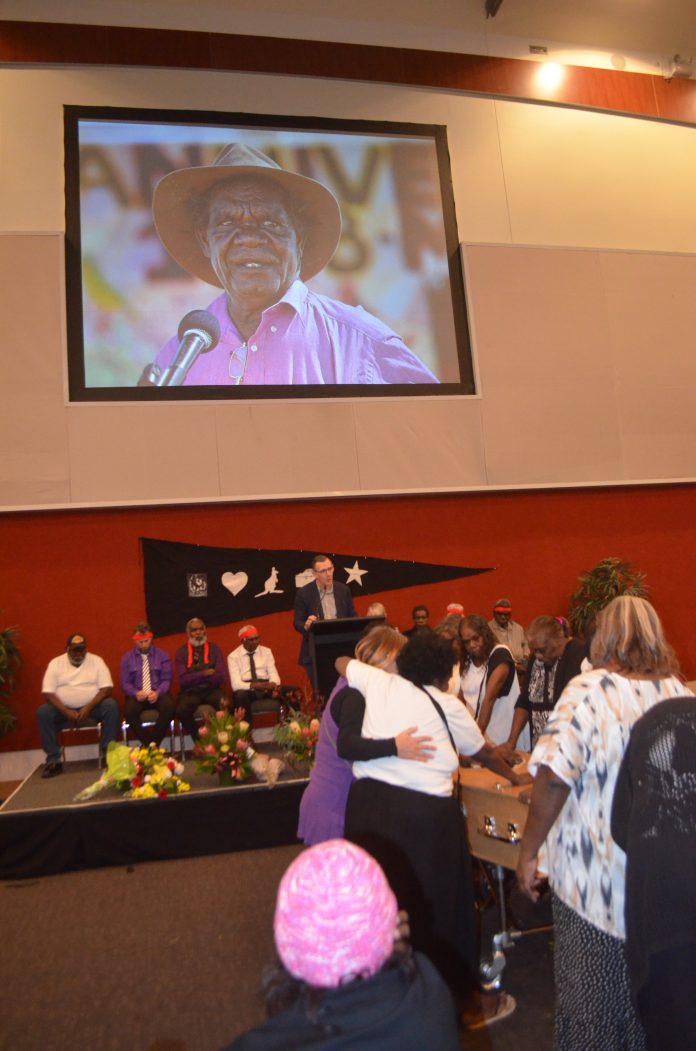 Hundreds of people gathered at the Convention Centre in Alice Springs this morning, forming a line which didn’t end for two hours, moving slowly and mostly silently toward a casket.

They bent down to touch it with their hands or their foreheads, or kissed it, while four or five women gently put their hands on the mourners’ backs.

The mournful wailing by Aboriginal women, and some men, continued without interruption, reaching a crescendo when the coffin was rolled out. 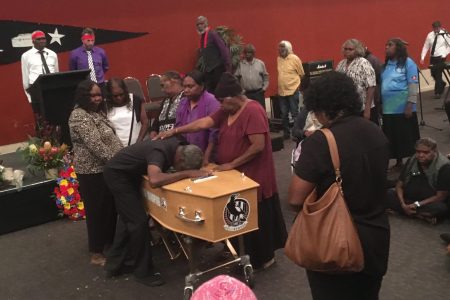 Inside was Jakamarra Nelson, dead at 77 years, after a life that spanned being a Lawman in the most remote parts of the country, to being an advocate and ambassador for his millennia old culture in Canberra, Sydney, Paris and Geneva.

The Warlpiri elder from Yuendumu was known for his sense of humour as much as his uncompromising defence of his people’s rights.

His power came from his high place in traditional law and lore, his charm when dealing with politicians and bureaucrats as well as his attachment to the Baptist religion.

“What a friend we have in Jesus” was Jakamarra’s favourite song, according the Matt Anderson, the Church Support Worker in the township west of Alice Springs (he says the term Missionary has been retired).

Warren Snowdon, MHR for Lingiari, remembered him as “a person of uncommon ability, a fierce fighter, a warrior, in every sense of the word, someone whose soul and inspiration was his Warlpiri integrity, his Warlpiri culture.”

Those cultural obligations didn’t stop him though from being an advocate, “being able to walk in another world, to be seen as an inspiration and a leader in that world as well.”

Jakamarra fought for land rights, for justice, for better outcomes in education, jobs and housing for Warlpiri communities and for people generally, said Mr Snowdon.

His life was not all serious purpose, however.

The young family members reading his eulogy, Jakamarra’s grandchildren Ernestine Williams and Moses Nelson, remembered how he loved a yarn and a laugh, how he enjoyed drinking and gambling too: “Sometimes he could win big at Blackjack and cards. He could disappear very quickly with his winnings!”

And football was a passion.

Mr Snowdon was a regular at the famed Yuendumu Sports Weekends, where Jakamarra was MC and where it also seemed that he controlled the timekeeper’s watch: “I used to think, ‘God that last quarter is going for a long time’, and it went until the famous Yuendumu Magpies got in front.” 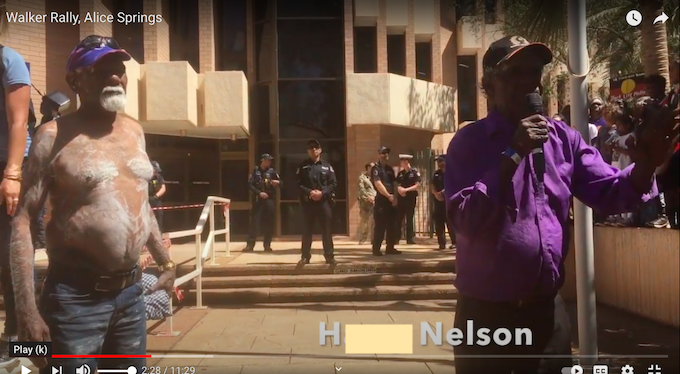 “Please, we come in peace” says Jakamarra (purple shirt) as the Kumanjayi Walker rally threatens to get violent. Video by the Alice Springs News. (Note: In the video Jakamarra’s full name is used.)

Jakamarra’s personal and cultural authority was also in evidence at demonstrations and rallies, whether in Canberra on the steps of Parliament House or in Alice Springs, making sure people behaved appropriately and that the right outcome was achieved.

He was a “very, very good person”, said Mr Snowdon, and “a man of uncommon intellect,” a persuasive debater, who could also live with disagreement.

Jack Waterford, journalist and former editor of the Canberra Times, recalled an earlier period of his life, when he working with the national trachoma and eye health program and Jakamarra was its senior liaison officer, about 45 years ago now.

Out of the 500 communities the program visited, and the 100,000 people it treated, Central Australia was the most successful, he said, “to a considerable extent because of Jakamarra”.

In those years too, he was with Jakamarra and others at Uluru. This was before the handover, which was bitterly opposed by the then NT Government.

The group came across “a plaque on a pile of bricks” which suggested that Uluru had been “discovered by Willian Gosse”.

A chain was put around the outrage, the plaque and bricks were removed – “one of the greatest acts of vandalism that had ever occurred,” according to the NT Government at the time.

If anyone is still looking for the plaque, it can be found in Fred Hollows’s old house, said Mr Waterford.

Chansey Paech, MLA for Gwoja, the NT electorate in which Yuendumu is located, hailed Jakamarra as “a fierce advocate, not only for Warlpiri, but for all First Nations people across this country.

“He stood up for us when the Intervention came to the Northern Territory, when Aboriginal men were being demonised, he stood up and told the truth about who we are and who we were.” 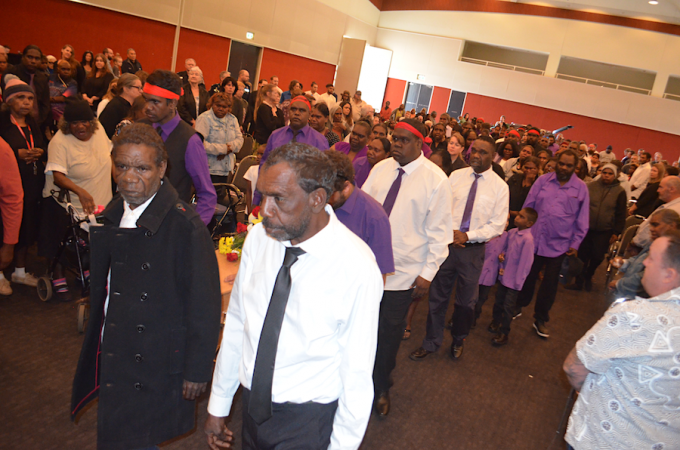 He also called out “no more” to violence, and called for peace when an Aboriginal man’s life was taken too soon from Yuendumu community, said Mr Paech, no doubt referring to the death of Kumanjayi Walker.

As recently as the 2019 Central Land Council, Jakamarra told the younger delegates why he was not ready to retire, recalled Mr Paech: “We are still very strong, we are still battling with the government and others who are damaging our country. I’m talking about mining companies, that’s why I joined the Land Council.”

Malarndirri McCarthy, Senator for the Northern Territory and formerly an MLA in the NT Government, worked closely with Jakamrra on the statehood steering committee, and later when she was Minister for Statehood.

It was Jakamarra’s belief that the NT, proud home to 100 Aboriginal language groups, was “well and truly ready to be the 7th state of Australia”, said Senator McCarthy (in a statement read by Mr Paech).

Pat Dodson, Senator for Western Australia, had experienced the man in settings far afield, at large national and international meetings, involving all kinds of different people: “As a Warlpiri man from Yuendumu he could be in the middle of Sydney or Paris or Geneva, trying to explain to a taxi driver that he was a representative of 40,000 year old culture and civilisation.”

Jakamarra was also always keen for “the settlers” in Australia to understand that there were Aboriginal nations here long before they arrived, said Senator Dodson.

Charlie King (at right), veteran broadcaster and longterm campaigner against family violence, was the one of the last to speak.

In 2006 he had travelled around the NT, talking to Indigenous men about the high levels here of family violence, although pointing out that “the problem is even greater around Australia, where one woman is a victim of family violence every minute of every hour of every day”.

He recalled Jakamarra walking up to him out of a crowd of about 30 Warlpiri men, looking straight into his eyes and saying “No more”.

It became the slogan of the campaign that Mr King has led, across Australia and in parts of New Zealand and the USA: “It was not a comment, it wasn’t a statement he was making, it was a command, it was what he wanted me to do.

“His legacy will live on, it will not be forgotten,” said Mr King.

Jakamarra was also the patriarch of a very large family who loved him dearly. He married twice, first to Candy, then to Lynette, and was father to four children, grandfather to five, great-grandfather to nine.

He also helped grow up the children of his siblings who passed away.

The full text of the eulogy for Jakamarra Nelson delivered by his grandchildren Ernestine Williams and Moses Nelson is here.