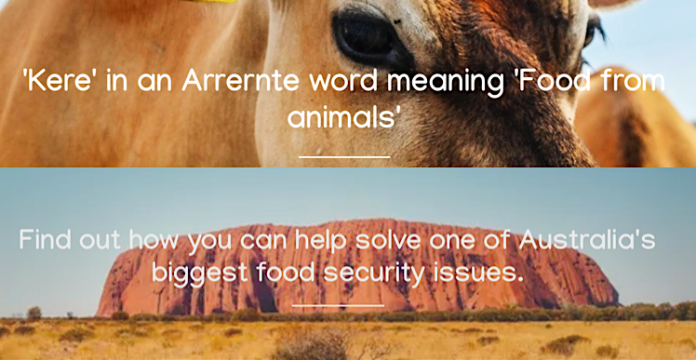 Desert Knowledge Australia (DKA) says it wants to accel­er­ate the growth of five local Indigenous enterprises “through inten­sive men­tor­ship, project-based learn­ing, and dig­i­tal tech­nol­o­gy inno­va­tion [as well as responding] to the socio-cul­tur­al bar­ri­ers of run­ning a busi­ness in Cen­tral Aus­tralia”.

The program called DKAccelerator is led by Jamie Toyne (pictured) who grew up in Alice Springs and moved to San Francisco where he founded a small business consulting group called Dealflow.

Now back in Alice he wants results “which can be replicated,” he says on the website.

The fifth, Kere (animal meat) to Coun­try, “a dis­rup­tive social enter­prise address­ing food security” is unfolding where land the size of a European nation is devoted to producing meat.

Its pitch is dramatic: “The team were astounded by the prices our fellow Australians in Aboriginal communities are being forced to pay for basic food and meat supplies in remote community stores.

“This food security crisis is well known among Territorians, but in 2020 this situation has escalated meaning Aboriginal families aren’t able to afford the essential products they need to keep their families healthy.

“Meat is just not affordable. How would you feel and what would you do, if you had to pay over $85 for one kilogram of poor-quality mince? This is just one example that resonates with us.”

Half of the Territory land mass is Aboriginal owned freehold, and most of that is cattle land, either currently or previously.

Aboriginal workers have played a vital role in the development of that industry, acquiring the necessary skills in less than a generation, men as ringers and women in the station households.

Yet none of that is taken into account in the slick pitch for the project funded to the tune of $326,000 by the NT Depart­ment of Indus­try, Tourism and Trade (for the five projects).

Says Mr Toyne: “The program will be rigorously evaluated to determine whether this is an effective Indigenous economic development model for Central Australia.

“My hope is that these businesses leverage this program to remove geographic barriers, become financially sustainable and create training and employment opportunities in the future.”

Kere to Coun­try explains its ambitions: “To become a nation-leading Aboriginal owned and operated supplier of affordable and quality Kere no matter your location on country.”

Yet under its business plan people from remote areas have to go to Alice Springs to buy the meat.

This is at a time when trouble in the town’s streets is widely blamed on people visiting from remote locations, and their kids.

Trips into town, frequently over hundreds of kilometres, aren’t going to provide much of an advantage over existing shopping here.

So far none of Kere to Country’s activities contribute to training nor employment in the bush.

Yet beef production seems a no-brainer to crank up the remote Aboriginal economy, and as a self-help initiative clearly a worthy focus for DKAc­cel­er­a­tor.

The chapter headed “Styrofoam” in a forthcoming book by Frank Baarda, who managed the Yuendumu Mining Company and its general store for decades, casts a light on the complexities but also the opportunities.

Mr Baarda writes: “North of Yuendumu, on the other side of Rock Hill (Wakurlpa) at a place called Ngalikirlangu, NPCo (the Ngalikirlangu Pastoral Company Pty Ltd) set up a demountable homestead, drilled a water bore and installed cattle yards.

“NPCo became one of a number of Aboriginal owned enterprises that aspired to take part in the NT’s expanding beef industry.

“Until then all beef in Yuendumu’s shops arrived sliced and frozen, shrouded in clingwrap on rectangular styrofoam trays, and in no way could be described as low priced.

“I don’t think I’m being paranoid when I assert that there was a concerted, behind the scenes effort, by the Kardiya [someone who is not an Aboriginal] establishment, to undermine the Aboriginal beef industry.

“No matter what hoops NPCo jumped through, it was unable to secure a licence and the abattoir was made to close down. No more low priced unfrozen five kilo bags of beef.

“Yuendumu cattle once again finished their happy free range life, with a miserable arduous journey to a slaughterhouse half a continent away before being converted into neat rectangular shaped portions, shrouded in clingwrap, on styrofoam trays, to make a half a continent return journey in freezer trucks.

“The clingwrap and styrofoam industries let out a sigh of relief.

“In due course NPCo became yet another victim of industrial infanticide,” Mr Baarda ends this chapter in his memoir.

It is likely that commercial slaughtering would be subject to miles of red tape but “home kills” are unlikely to be afflicted by bureaucratic interference.

It’s happening on all cattle stations.

The “killers” would come from Aboriginal land, or be bought from a neighbour. They would be owned by Aboriginal families and be eaten by them.

No money changing hands. A bush solution in The Centre’s spirit.