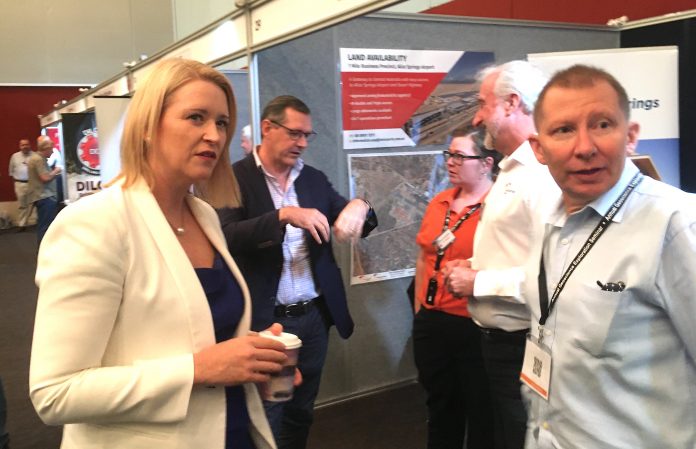 Our resource industry, the Territory itself and the gas sector will not reach their full potential “without close collaboration by traditional owners of the land on which we operate. Aboriginal people must not only be part of the economic development but driving it with us so they can benefit from jobs, better services and a better quality of life”.

NT Mines Minister Nicole Manison scored applause for this statement when she addressed the 200 delegates, 60% from interstate, to the Annual Geoscience Exploration Seminar (AGES) in Alice Springs this morning.

She said despite Covid more than $110m was spent on mineral exploration in the NT in 2020, just 16% down on the previous year.

The resource industry, already the Territory’s “biggest industry and single largest generator of export revenue … is poised to take a leading role” in creating a $40 billion economy in 2030 during its post-pandemic reconstruction.

As a major announcement Minister Manison said the government is committed to permanent funding of $9.5m every year to expand, by $3m a year, the “hugely successful” Territory Resourcing Initiative instead of closing down, as planned, exploration stimulus programs this year.

This would be expanded from greenfield programs to now include brownfield ones as well.

Minister Manison said: “There are probably few examples in Australia where a program of pre-competitive geosciences led to an uptake of tenure of such a large area in such a short period. This is testament to the potential of the region.”

She described the gas-rich Beetaloo Basin as the “the next big play nationally and internationally” where Origin and Empire Energy, drilling two wells, both discovering liquid rich gas, “a critical step forward of assessing the viability of large scale production in the basin”.

She said in January $217m was announced as part of the Territory’s “gas industry roads upgrades program” in addition to $150m for the Carpentaria Highway.