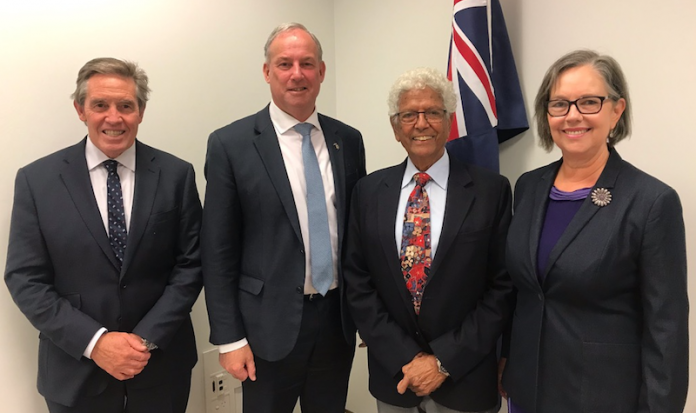 Leading not-for-profit Aboriginal early years initiative, Indi Kindi will expand into new Indigenous communities in the Northern Territory, including Tennant Creek as part of a partnership with UNICEF Australia.

Indi Kindi provides an early years program for under fives in remote communities that combines education, health, wellbeing and development to give Aboriginal children the best start in life. The program has been delivered successfully in the remote communities of Borroloola and Robinson River, in the Gulf of Carpentaria.

The program will create around eight new local jobs in Tennant Creek as well as volunteering and work experience opportunities. Indi Kindi has a proven track record of keeping local women employed and currently, 60% of its staff in Borroloola have been employed for four to six years.

Moriarty Foundation Honorary Managing Director and Co-Founder, Ros Moriarty, said: “It is very significant to be deepening our relationship with UNICEF Australia. UNICEF’s charter in Australia is closely aligned with our objectives in that it is an advocate for children’s equality, regardless of remoteness or life circumstances.”

Moriarty Foundation co-founder and co-chair, John Moriarty says: “The expansion of Indi Kindi is the culmination of many years of hard work by our local Indi Kindi educators and community advisory group. They have shown that an initiative that is co-designed within an authentic Aboriginal worldview, is able to successfully close the gap and have immense long-term benefits our children and community.”

According to the Barhava Report, Indi Kindi has had, and will continue to achieve, considerable health, education and community impacts. Its holistic approach, delivered in a culturally relevant framework with the aid of local knowledge and local languages, is proving effective in shifting entrenched inequalities in school readiness and health outcomes in Indigenous Australia.

The Moriarty Foundation has seen continuous participation growth in John Moriarty Football in Tennant Creek since launching 12 months ago. The decision to establish Indi Kindi in the region was based on the community identifying the need for the initiative.

“We must work together to create a strong foundation for future generations. Indi Kindi will help the young kids to learn and will also be good for their health and wellbeing, and for their mums too. We also want Indi Kindi to provide sustainable employment opportunities for local women.”

The expansion of Indi Kindi to Tennant Creek was made possible due to UNICEF Australia’s recently announced partnership with Livingstone International to support early childhood development programs for Indigenous children living in remote communities.

UNICEF Australia Chief Executive Officer, Tony Stuart, says: “UNICEF Australia and the Moriarty Foundation are united in our belief that all Australian children should have an equal opportunity to realise their developmental potential.

“Working collaboratively, we are committed to helping to improve outcomes for children and to addressing multigenerational disadvantage in remote Aboriginal communities.”

The Moriarty Foundation was founded in 2011 at the request of senior Aboriginal Law women in Borroloola who wanted to see their grandchildren better prepared for school.

Borroloola is one of the most remote and disadvantaged communities in Australia, with severe poverty stemming from high unemployment (50%) and extremely challenging standards of education and health.

According to the Australian Early Development Census, 66% of children in Borroloola are classified as vulnerable in two or more domains, compared to 11% nationally.

A member of the Stolen Generation, John Moriarty AM, was the first Indigenous person selected to play soccer for Australia.

He was the first South Australian Aboriginal university graduate and is a former resident of St Francis’ House.