Barkly has a can-do dude at the helm 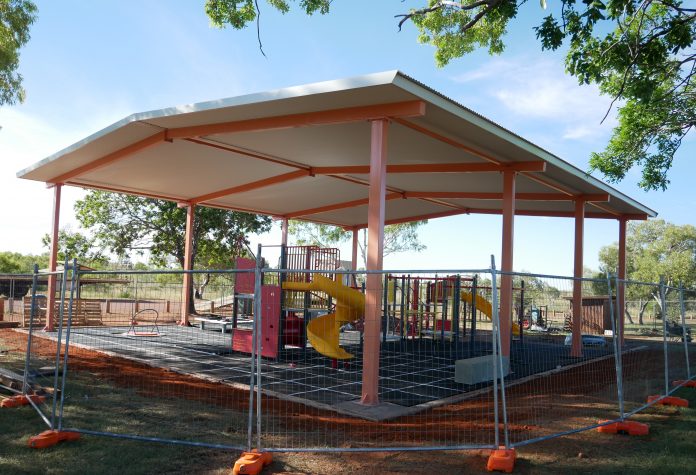 Jeffrey Mclaughlin sits over a Big Brekky plate laden with bacon eggs and white toast in The Red Centre Cafe in Tennant Creek, a giant keepcup of black coffee at his right hand.

He has a thick brown beard, halfway between Amish and pirate, which is beginning to grey.

He looks a little disheveled. His bright blue button up shirt is covered in pictures of Pina Coladas in coconut shells. It is Tuesday morning and this is the Mayor of the Barkly.

Picture the Dude, and you are halfway to the visual representation, but The Mayor is after more than reimbursement for his urine-soaked rug. Behind all the exterior, there is a want to enact change.

Mclaughlin became mayor in late 2020 when Steve “Edgo” Edgington vacated the seat in order to represent the Barkly in the Territory Parliament. There was no by-election because the next council elections were under twelve months away. Mclaughlin was uncontested. In the morning he was just a councillor who had finished fifth in the Patta ward, by night he was mayor, with a substantial pay packet and council car.

A night of celebration followed. 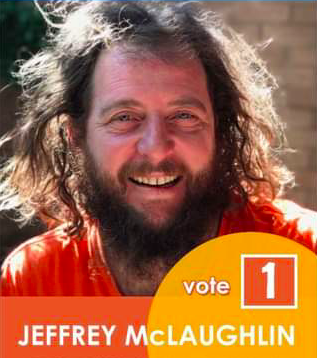 “I woke up in the morning and I was like, it must have been a big night, cause I was like the mayor,” Mcloughlin says, slowly working his way through breakfast.

“Even today I sometimes wake up and it’s like a dream.”

It’s been a strange path to this point. Like so many in this part of the world, Mclaughlin just sort of ended up here. 15 years ago he took up on a whim a job  advertised as an “entertainer gardener”. A trained musician sick of the scene and city life, he left Brisbane behind and didn’t look back.

In the meantime he’s been a classic Outback jack of all trades. He built up the gardening business and left it to a couple of young fellas who worked with him.

He founded the Winanjjikari Music Centre in a role with Barkly Arts and still sits on the board for NT Music.

Working with Territory Families in 2018, Mclaughlin, who performs under the stage name Dr Flouride, helped thirty local kids build and play guitars over the summer in a program dubbed Rock with the Doc.

So, it’s not all bright shirts and daggy jokes. Much like the town he lives in isn’t just a blip on the Stuart Highway with a history in gold mining and a high crime rate. It takes someone who believes in a downtrodden place to lift it up, and Mclaughlin believes in the Barkly.

“I really believe in this community, and what it can do, like there’s so many opportunities and I’m in the perfect position.”

Mclaughlin says that the position he holds is “one of the greatest privileges” of his life. It’s a result that has its roots in a decision made when Mclaughlin and his wife were expecting their first child. He had to decide between life as a touring musician and being there 100 per cent for his family.

“So the best thing for me was I stayed at home and got a job at BP.”

It takes a commitment to go from touring bass guitarist and music producer to servo desk jockey, and at first Mclaughlin says he “hated it”.

But he’s the kind of guy who makes things work, so he started pretending he was happy in the job.

“Pretty soon I was like ‘Wooo!’” Mclaughlin throws his hands in the air and points to the sky in the middle of the cafe.

This is a man who can will himself to be content in any situation. Now as the mayor he says his main job is “to build morale.”

While working at the BP, Mclaughlin found unorthodox ways to keep the business safe from the vandalism and theft that so often causes woes of Central Australian businesses.

He put an occasional packet of smokes on the company bill and would share a few cigarettes with angered late night customers, talking them down before the situation could escalate.

He paid kids wandering the street at night to clean up rubbish with pies from the oven and a coke from the fridge, building relationships in the process.

When the owners of the franchise asked him what on earth was going on, he put it in simple terms: “It’s either that or they smash all your windows.”

Throughout the morning people stream through the front door of the cafe. The interior is all white tiles, and despite the fact that there is no music playing there is loud ambient noise. 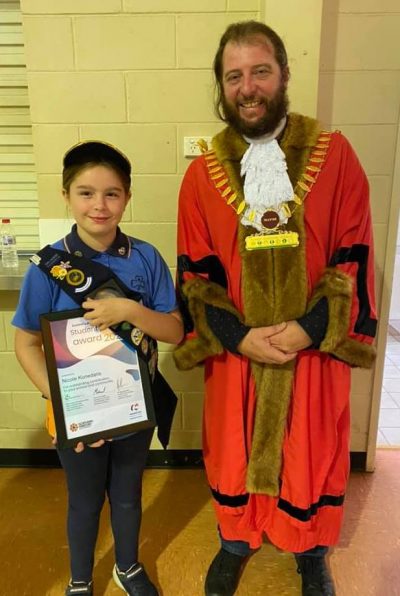 However, nothing is louder than Mclaughlin when someone he knows walks in. His arm shoots in the air, his palm broad and waving to make sure they cannot miss him, which seems impossible.

People greet him warmly. The most common way people describe the man is that his heart is in the right place. There is a sense that most of the people I spoke with want to give him a go as mayor, but that will be decided in the August election, or as Mclaughlin calls it, “the big job interview”.

Maclaughlin has a phrase he likes to use: He could “Trump this town.” What he means is that he could promise big and likely not deliver, but there is a slight sense of low level populism at play here.

Not in the red hat way, more in a feeling that Mcloughlin is a man of the people; a dad from the community who has risen to its top office. Mcluaghlin’s Facebook was his main campaign tool in the 2017 election and it stands to be once more in 2021.

He has nearly 3000 friends on the platform, more than there were voting constituents in the Barkly in 2017. His campaign videos The Golden Shovel have thousands of views.

Mclaughlin’s popularity stems from his personality, but he understands things need to be achieved if he wants to ride the wave to a full term.

When Mclaughlin entered the race for council in 2017, he was the president of the local play group. He wanted a playground at Lake Mary Ann (Tingkkarli) for his kids and other youngsters to play on.

Today that playground will have an official opening (a bit dramatic but this is the Territory after all, small victories will be celebrated vigorously).

Now he has much more on his plate than building playgrounds, but youth problems are still a big part of the job. There are two youth centres on the cards. One a Youth Justice Centre, the other for recreation.

Mclaughlin says that the justice centre will be “a place for vulnerable youth in trouble with the law”.

A more holistic approach than Don Dale, but a criminal facility nonetheless.

“This is like where these kids need a bit of guidance, so that’s it. It’s a place where you will have trainers, proper health workers.

“So it’s a place where kids are close to the country where they live. Usually they’ll ship them off to Alice or Darwin. They’re close and then we’ll have elders that will come out and teach them, and social workers, trying to get them back on track. Not just locking them up in a room.”

In conjunction, the council is “also doing a youth centre in town, which is going to have like a ninja warrior course and a cooking area.”

The council already has the money to build the second centre, but is still sorting out the operational funding.

One thing you notice about Tennant Creek is the ever spoken of gap. Many Aboriginal people live in poverty in camps while the streets are lined with shiny new cars and the cafes filled with young mostly white professionals.

The service industry — the driving force of both the Territory’s economy and its debt — is strong here.

Mclaughlin says that there is another gap: one between the number of people here for work and the amount of work that gets done.

“Some people just come here and gravy train it,” he says through a mouthful of egg, “there’s a lot of things that have no accountability.”

Mclaughlin says that for any of the 28 initiatives to be achieved, the service industry has to be held accountable.

“We want to have a boom across all industry, all portfolios, everything across the whole town, because so many people have been ripping us off for that work.”

On the topic of getting ripped off, the price of cigarettes comes up. The price for a 50 gram pouch of Winfield tobacco at the Tennant Creek BP is $113.

Some people may have heard Mclaughlin’s rant about the topic during a radio interview with the ABC’s Stuart Brash late last month and found it somewhat comical, and it would be if there weren’t real world problems that come as a result of that price tag in remote communities.

It’s easy for nonsmokers and policy makers to cite raising the price of smokes as a way to combat smoking, but what if it doesn’t work? What if people just spend more and more of their money?

“We’re talking about a whole bunch of addicted people. People are having domestic violence issues over a cigarette butt, seriously.

“Literally, you look at Alice Springs’ problems, like how it’s escalated in the last four years. You look at when the cigarette prices went up, it directly correlates.

“But everyone wants to blame alcohol.”

Alcohol is definitely a problem, but the point is that the blanket approach to these sorts of problems can be suffocating for remote communities.

At the end of the interview, Mclaughlin invited the News to a meeting between Sun Cable, who are planning on building the largest solar farm in the world near Elliot on the northern edge of the Barkly, and local stakeholders.

When the paper’s reporter arrived they were met with slight shock and unease. This was not an event that was open to the press, just something to keep traditional owners updated on progress, but Mclaughlin didn’t think like that, and that’s illustrative of the type of mayor and person he is.

He might not think of things in political terms at all times, he just wants to show that things can get done in the Barkly.

PHOTO at top: The playground that headed the new mayor’s election platform.