Showing movies where there’s no cinema

“Creating high quality cinematic experiences in places that don’t have cinemas, or are hundreds and hundreds of kilometres away from cinemas.” That’s what the NT Travelling Film Festival is all about, says its creative director, Britt Guy.

The festival, first run in 2018, shows Territory made films around the NT, mostly outdoors.

The idea came from films about Territory life being shown to high acclaim at film festivals around the world, but rarely in the NT, especially outside of Darwin and occasionally Alice Springs.

A large part of the program is built on providing screenings in remote communities, which are purely for people who live in these communities.

“We all appreciate being able to see our stories ideas, and our culture reflected back to us. We see NTTFF as a service for regional and remote NT,” says Ms Guy. 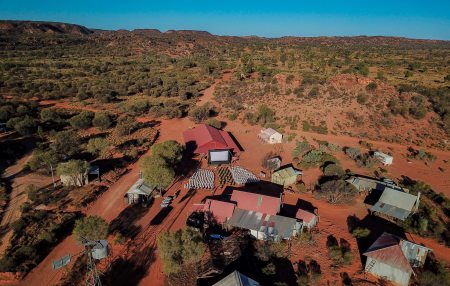 Accompanying these screenings are a range of iconic screenings, which are open to the public at large.

The first such screening will take place at Ooraminna, 30 kilometres south of Alice Springs this Saturday.

“We travel with the selected film program but each place is a little bit different, we try to shape each screening to be reflective of the people and places that the films are about.

“We work with an advisory committee to design the program and tour, we really try to make sure that it feels like something that is accessible for all of our diverse NT community.”

The advisory committee is made up of existing advocates, past filmmakers and community and tourism partners.

This year the films were chosen from both 2019 and 2020, a reflection of the broken year that 2020 was for all, which interrupted and largely cancelled the film festival last year.

Most of the showings, including the Ooraminna event this weekend, are showcases of short films rather than feature length, giving the audience a taste of works from all over the NT.