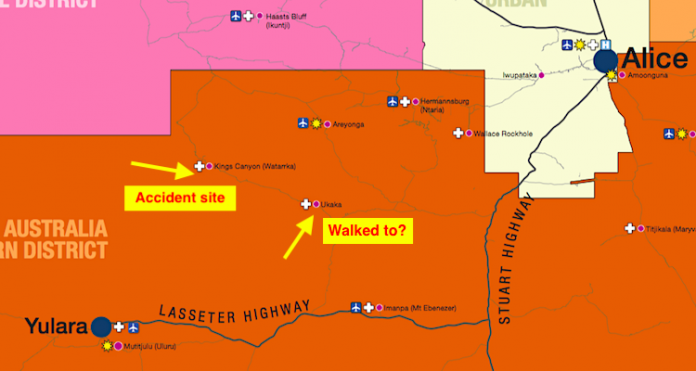 A 47-year-old man appears to have walked nearly 70 kilometres in up to 38 degrees heat after rolling his car south of Kings Creek Station yesterday.

Police, which had been searching the area close to the accident scene, say the man today turned up at Ukaka, well to the east.

They say it is still unclear how the man, who left the scene of the accident at 9am yesterday, covered the distance.

He is being assessed at the Ukaka clinic, police say.

Two women, who had also been in the car, were taken to the Alice Springs hospital with minor injuries.

It is not yet known what – if any – injuries had been suffered by the man.

UPDATE 11am, January 28: Police have confirmed that the 47-year-old man walked the entire 69km back to the community of Ukaka.

“Understandably the man was dehydrated by the time he arrived,” says a police spokeswoman.

“Apparently during the walk, he was given some food and water by passing tourists who came across him late at night at the intersection of Luritja and the Ernest Giles Road, however the accomplishment of that distance in that kind of heat is nevertheless extraordinary.”

UPDATE 11.50am, January 28: Police are now saying they have yet to corroborate the man’s claims that he has walked all the 69 km distance, saying he is tight-lipped about his experience.