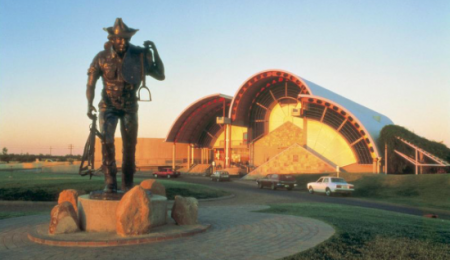 “We’re looking at potentially the busiest year we’ve ever seen,” says Alan Smith,  owner with wife Sue of the Longreach business, Outback Aussie Tours . That’s “give or take hotspots and what COVID may or may not do”, of course.

The streets of their town, not that far from the NT-Queensland border, may be deafeningly quiet right now, but operators and experts say the region’s tourism industry has fared remarkably well in the face of the turbulent COVID affected year.

David Arnold, CEO of the Remote Area Planning and Development Board (RAPAD), which pays to produce tourism reports for the region, says: “Anecdotally, my understanding is that we pretty well regathered.”

At the Qantas Founders Museum (at top) on the outskirts of Longreach, 2020 was supposed to be the year of centenary celebrations of “The Spirit of Australia”.

That all crashed when the museum closed to the public a day before the Federal Government mandated all museums across the country shutter their doors in late March.

At that stage Queensland had just under 400 COVID-19 cases and the future was unknown. 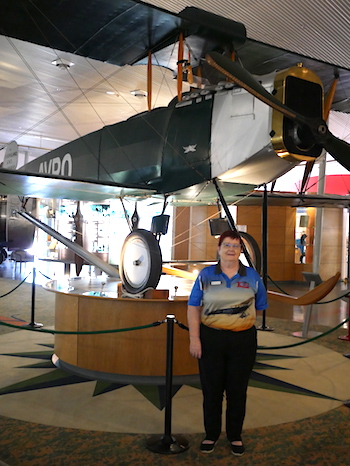 When the museum reopened in July, General Manager Alleyne Johnson (pictured) says that they tried to keep expectations low.

“We didn’t know what the future would bring, we expected everything would be closed down [again]. That hasn’t happened — we’ve been successful.

“When the Queensland Government said that we could reopen, our projects weren’t completed, therefore we couldn’t open. So, we then actually reopened on the first of July.

“From the first of July it’s been amazing. Everyone’s been traveling, all the Queenslanders, there’s been a huge influx and increase of tourists coming out to Longreach.”

Initially, capacity had to be lowered throughout the museum. The cafe, which could seat 80, could only have 30. Under current restrictions it can now seat 60.

Tours also had to be lowered from 30 per tour to 20. The theatre, which usually displays a short film about the founders of the iconic airline, has had to remain shut due to the rigorous cleaning protocols it would require to be used on a regular basis.

By the September school holidays, the museum was cruising at absolute altitude.

“We were at capacity and we put on extra tours. September holidays were definitely the peak,” says Mrs Johnson.

During that period was the unveiling of Luminescent Longreach, a nightly light show played on the body of the Boeing 747 that sits in the hangar of the museum. The light show tells the story of Qantas, from Outback beginnings to nation dominating airline.

Plus, it gave the Museum the opportunity to pull revenue at times when they had previously been closed.

Mrs Johnson says that things have slowed down in the hotter months, that this is a “quiet time of the year,” that coincides with “a break between Christmas and the new year when a lot of local businesses could take holidays”.

While it is understandable that business owners and their workers need a break, Denise Brown from Outback Queensland Tourism Association hopes that shops and operators can find a way to stay open for visitors during this period in the future.

“That is certainly one of our goals, working with retailers and coffee shops, as well as the chamber of commerce through the Economic Development Office, to encourage businesses to stay open longer for the holiday season.”

Mrs Brown says that those visiting over the Christmas and New Year period have mostly been on the move, “getting over the South Australia or the Northern Territory borders.

“Because people are travelling interstate, they are discovering the Outback.”

Mrs Brown is currently working with Tourism Queensland on a recovery plan that capitalises on short term visitors and turns them into tourists who want to visit the region for longer rather than just pass through.

The plan will involve an advertising campaign that will continue to promote Outback experiences in Brisbane, the Gold Coast and other population hubs.

“We’ve got one million square kilometres, we’re COVID safe, it’s never been a better time to visit The Outback.”

On the whole, she believes that Longreach has been a tourism success story not only in 2020, but dating back to the beginning of the decade.

One Longreach business that has already started reaping the benefits of travellers opting for the country’s interior in place of cancelled trips overseas is Outback Aussie Tours.

Just like the rest of the region’s tourism operators, the couple’s business waned when COVID reached Australian shores. While they were grateful to receive JobKeeper payments, their team dropped from 65 to 13 as a result of the downturn.

As Queensland started to ease restrictions, the business began to flow once more.

“By July we had to get our ducks in a row and work out what we could do, and it was all new ground.

“We found a lot of people came to western Queensland. It was probably the busiest three months I think we’ve seen in 33 years of operation.”

They started doing longer tours in August which continued into December. Mr Smith says the usual busy months are from Mother’s Day to Father’s Day — May through September.

By October, Mr Smith says “we were so busy we didn’t qualify for JobKeeper”.

Data collected by Stafford Strategy for RAPAD shows that in 2019 the Longreach region was by far the busiest tourist stop in Central-West Queensland, with over 121,000 domestic visitors spending the night throughout the year.

These visitors spent more than $213.8m, a number that Albert Stafford from Stafford Strategy says may well be even higher due to the way governments collect “average spend” data.

Both Mrs Brown and Mr Arnold agree that now is the time for the Longreach region and the Outback as a whole to jump on the chance to gain an even bigger foothold in domestic tourism.

As Mr Arnold puts it, people who might normally be in the north of Italy, cannot travel overseas: “We’ve got a new demographic coming out of COVID-19, and we need to capitalise on this.”