How not to manage a pandemic 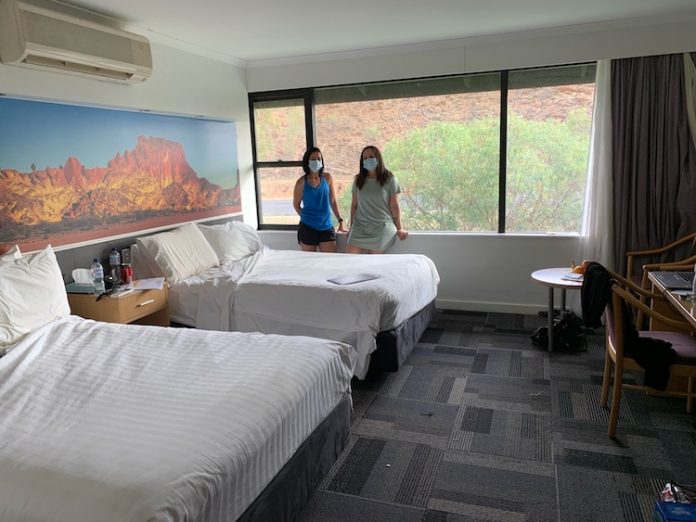 “No-one knew anything” is how Samantha Tran describes the mismanagement of people being forced into COVID quarantine this week.

It began in Adelaide on Monday, half an hour before boarding their return flight after “a girls’ weekend away”.

She, her sister and her sister-in-law were told by a flight attendant – not someone representing the NT Government – that they would have to go straight into quarantine when they got to Alice Springs where their partners and children were waiting for them at home.

“It was stressful to tell them we won’t be home with them for a while,” says Ms Tran.

When they arrived in Alice at 2.45pm “there was still no official communication. We were escorted into a waiting area. It took about an hour for the line of people to be processed”.

Another waiting area and then onto a bus which took 20 minutes to take them to the “Todd Facility” – the Meridien Hotel.

And this is where they stayed, in the bus, until 7pm – no water, no food, no communication.

“It was traumatic,” says Ms Tran.

The three had chosen to share a room, for company: “Keeping us sane.”

There is a double bed and a single bed.

Once having checked in it took another 40 minutes for room service to bring food.

To get a box of water required another phone call to reception.

There are supposed to be two out-of-the room exercise periods of one hour scheduled a day.

Not so for the trio, who were waiting to be called on Tuesday for their turn, but no-one came: “We could not fit it in,” they were told by those in charge.

As it turned out, the three were “stuck” in the small hotel room from 7pm on Monday until 11am on Wednesday.

Still, they are counting their blessings: Some Alice friends were given 10 minutes to pack and to be flown from Alice to Darwin and Howards Springs on Tuesday.

They have a perfectly good house in Alice, says Ms Tran, ideal for self-quarantine.

At Howard Springs they were accommodated separately, in two cabins.

Ms Tran says the only upside for the trio is that their room faces the road where their children and partners can wave and talk to them, and being in Alice they can more easily muster support from friends and families.

PHOTO (from left) Renae James and her sister Samantha Tran in their quarantine room today.

A reader advises the hotel is not the Meridien but the old Mecure now known as the Todd Facility.