The partner is not a cop 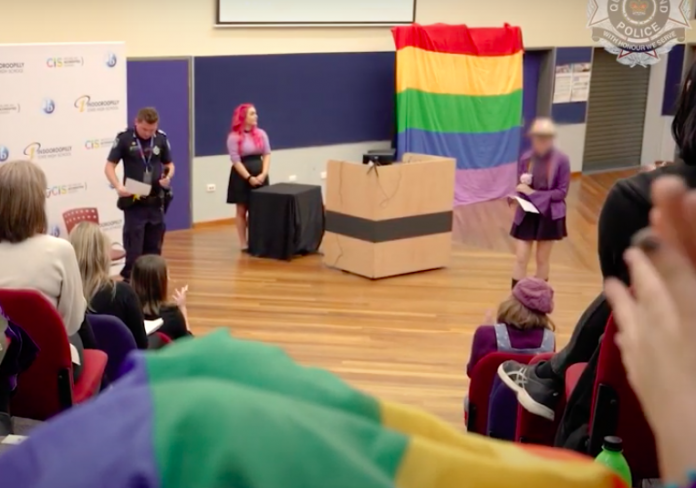 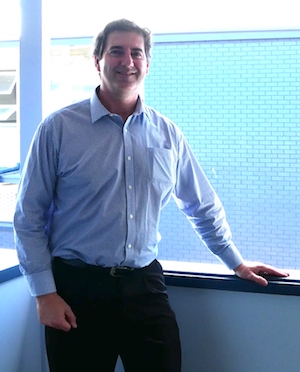 In Logan, just south of Brisbane, an award winning model of youth policing has emerged where youth workers and police officers work in unison on the streets, coping with the kind of trouble that many think is out of control in Alice Springs.

The regime, dubbed the Youth Co-Responder Program, has had remarkable success in building relationships between departments and kids at risk, while limiting punitive action.

The program is the brainchild of Detective Senior Sergeant Grant Ralston (pictured) and Detective Inspector Mark White, who together received a Child Protection Award for their efforts.

DSS Ralston says that spreading the workload and accessing as many resources as possible is key to making disengaged kids feel they are supported.

“Traditionally, it’s been police get an issue with young people, they attend, sometimes it ends up in punitive action.

“Having a police officer and a qualified caseworker or youth worker from Youth Justice in the vehicle … the beauty of that is that the crew can deal with that job in a less punitive format.”

DSS Ralston says that this allows teams to “stop and engage and find out what the underlying issues with that person or persons might be,” rather than limiting themselves to the corrective powers of police.

If kids are out on the street at night, and punitive measures can be avoided, “the team explore every opportunity to transport them to a place of safety. 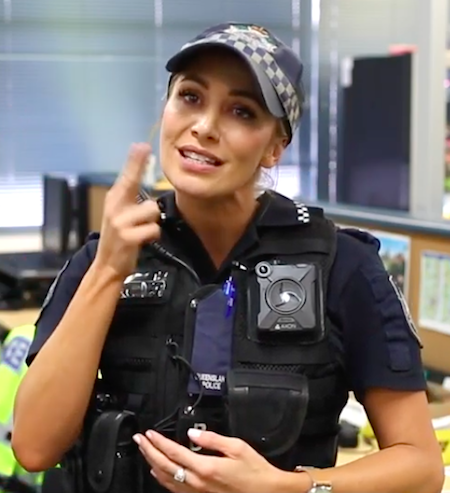 “If it’s not a parent it’s another family member’s home: a brother, an aunty, an uncle, sometimes even a friend,” says DSS Ralston.

“Then if we need to, we go to emergency housing through assistance from the department of child safety.”

DSS Ralston and QPS do not limit the inter-agency approach to youth justice at co-responder units.

Seven days a week, in an old staff room at Woodridge High, one of the largest high schools in the region, DSS Ralston works alongside colleagues from the Department of Health, Education, Youth Justice, and Child protection, to focus on individual cases of kids who have disengaged with schooling.

The team goes through cases one by one, finding individual solutions suited to each individual situation.

This program is called Logan New Directions Youth Support Program, and since its inception in August 2019, the team have worked with 47 individual cases, 35 of which are ongoing. All of the cases the team takes on are already known of by at least one of the departments taking part.

Much like the collaboration of departments is the foundation of the programs’ successes, the interaction of the co-responder teams with the office based New Directions team is vital to providing support to those who need it.

DSS Ralston says when one of the 35 individuals they are working with needs to get to court or programs, they can “utilise that Youth Co-Responder car,” to help kids and families get to the places they need to be.

It’s that attitude of weaving resources to create a safety net that makes what the efforts of the two programs so impressive.

DSS Ralston says that sourcing other resources and organisations that can provide safe places and support for youth that traditionally sit outside the departments involved is a must for any community trying to curtail youth alienation and crime.

“I think that’s where the groundwork really needs to start … It’s working outside those big agencies.

“In Logan we’ve actually gone out and canvassed our non-government organisations and community groups, and they seem to be the great arm of this sort of project.

“Each location has got to make those options available. It can’t just be one PCYC (Police Citizens Youth Club), because not everyone is going to want to go there alone. There needs to be a few options for young people.”

DSS Ralston admits that “we have found traditional school is not for everyone,” but by getting kids talking with youth justice workers, and at times school based police officers who are familiar to the youth on the streets, a conversation about other learning pathways such as flexi-school or vocational options can begin.

The aims of LND is not just about learning through the education system, but rather getting kids to engage with learning first through activities they are interested in.

DSS Ralston says one example of a program that was born of this methodology is an initiative where police donate found bicycles that have not been claimed to a local PCYC.

Kids, some of whom are individuals focussed on by LND, spend two hours a week learning how to fix up a bike, which they get to keep at the end of the program.

The time at the program is split between the restoration of the discarded machines and learning about living healthy lifestyles. DSS Ralston says while all of this is happening the kids are encouraged to spend more time at the club, both during the eight-week period and after.

“So you’re teaching them a few life lessons and ensuring them ‘we’re not going to leave you, we actually want to provide you with more pathways for your future,’ and find out from the young people in that program what they want in their life.

“It’s not about what we’re trying to fit them into, it’s what they want to do, and we’ll provide a link to that pathway.”

There are no statistics about the programs’s results but judging by its spread throughout Queensland it must be doing a lot of things right: Since beginning as a part-time, six-month trial in Logan, the Co-Responder Program has expanded to a 24-hour service to in Cairns, Townsville, Rockhampton, North Brisbane in addition to Logan. A New Directions program is also running in Beaudesert.

DSS Ralston says that for the Co-Responder Program to run smoothly, it requires five full-time police and five full-time Department of Youth Justice employees, but that due to the nature of police work, around seven police are generally used per area.

All the police who work in the co-responder unit nominate to be there. DSS Ralston says “it doesn’t take an army” to do this work, but it does take people who care.

DSS Ralston says the co-responder program is not perfect and is “still evolving,” and admits that any attempts at replicating either of these programs would require significant tinkering to fit certain situations.

Mostly, it’s about getting people where the kids are, when they’re causing trouble and when they’re not, to build relationships.

As Alice Springs based Andrea Martin said in Letter to the Editor we published on Saturday, alienated youth are not limited to Central Australia.

Australia is a wealthy nation with a broad-ranging and well-resourced public service which should be able to bear the weight of such a program, as well as interact with communities and find balanced solutions. In her letter Ms Martin summed up what needs to be done:

“We need communities, leaders and all levels of governments to share a sense of urgency, the confidence to be bold, the resilience to try, try and try again and a commitment to be in it for the long term.”

For DSS Ralston, that urgency is already there, and from where he’s sitting, where there’s a will there’s a way.

“It’s about being innovative, trying something new and seeing if it makes any positive change.

“We would just encourage anyone to try it — and you know what? If you try and fail, what have you really lost?”

IMAGES from the Logan police website: It finds ways to get close to its community, in person and via videos, the internet, at schools, as “Coppas on the Couch” and with “signing” officer Latisha Whalan.

Facebook
Twitter
Pinterest
WhatsApp
Previous articleNAIDOC: Thumbs down for Bungalow history, Wyatt’s billion dollar stash
Next articleWatch out for ants running up and down your citrus trees