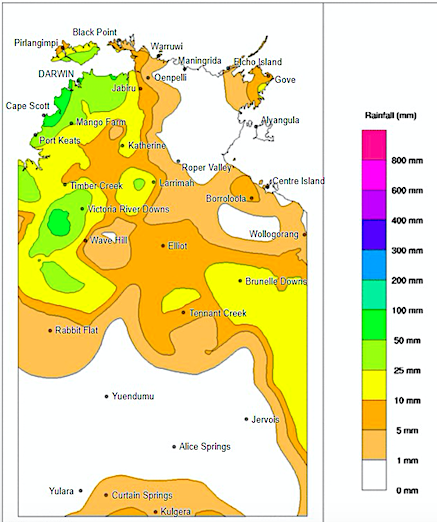 Alice Springs is missing out on rain – again!

Thunderstorms bringing gusty conditions are likely to produce rain today and tomorrow in the far south west corner of the Territory including up to 5mm at Uluru.

It’s possible they will be extending east to Alice Springs, but it’s more likely any rain will fall on the outskirts and be less than 1mm.

In the Top End rains so far this September have been notable, with several locations recording their highest monthly rainfall totals ever, according to the Bureau of Metereology.

Included are Charles Darwin University with 94.8mm so far, Dum In Mirrie with 90.6mm and Middle Point recording 48.6mm. Further inland Yeuralba Ridge, about 45km north east of Katherine has had 54.6mm of rain.

The image shows how much rain has fallen across the NT since the start of the build-up.

For many areas, these totals are above average rainfall for this time of year, particularly coastal areas in the western Top End, some western inland areas and south east of Tennant Creek.