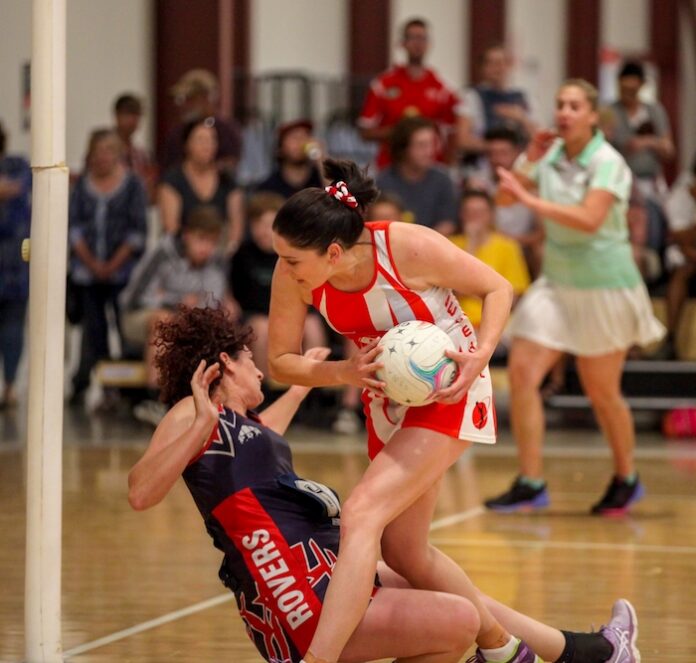 This week’s KFC A Grade game sees a replay of last year’s grand final with Federal taking on Rovers on court two at 3pm.

Rovers will be strengthened with the return from injury of Tracey Meekings, who will ensure Federal shooters will need to be on their game as she is one of the best rebounders in the competition.

Both teams have top notch centre court players and both teams can put excellent combinations on the court.

One possible match up to watch could be Federal centre Phoebe Wilcox up against Lauren Parai from Rovers.

Rovers shooters will need to bring their A game as any misses will be snapped up by Federal defenders Katelyn Patterson and Tahlia Lee.

The last time these teams met Federal ran away with a 21 goal win. This week’s game however looks to be a closer battle.

In the other Club Eastside, A Reserve games Rovers CC take on Rovers TRex.

The younger CCs have had the upper hand on TRex and this looks to continue this week but you can never underestimate TRex.

Federal take on Seasons in the remaining game.

In the Yeperenye B Grade, ladder leaders Federal Angels take on the unpredictable Wests.

Wests upset Sundowners last week and have moved into fourth place on the ladder and will be looking to consolidate this position. However, Federal Angels should be too strong.

The 17&U has the closest ladder in the competition with only four points separating first and fourth and all four teams capable of taking out the premiership.

This week sees first taking on second with Neata Glass Giants versing Federal White in what will be a close hard fought game.