Home Issue 32 Diversity at the top in council ... for next seven weeks
Issue 32Volume 25 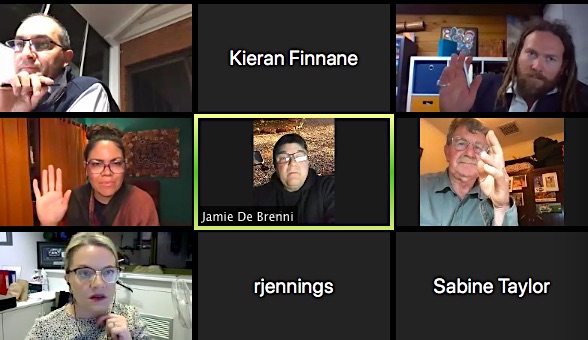 For the next seven weeks the Town Council will be headed by by Jamie de Brenni as Mayor and Jimmy Cocking as Deputy Mayor.

Another nomination would have been pointless and all five councillors at the special meeting raised their hands for him.

Mayor de Brenni will wear the crown (or chain, more accurately) until after the results of the NT elections become clear and any unsuccessful candidates apply to be reinstated to their former positions.

If the former Mayor does to apply to be reinstated, Mayor de Brenni looks set to remain in the position until the end of council’s term (August 2021). However, Cr Eli Melky has given notice that he intends to challenge this.

With all four now absent from council, the remaining five met tonight, together with officers and staff.

Going into the special meeting it looked like only an interim mayor would be appointed – the recommendation of officers.

However, Cr Cocking argued that council should create a “caretaker mode” for itself during this period, with a a solidly structured leadership.

He won over Cr Auricht who nominated him, though it looked for a while that he wouldn’t get a seconder.

Meanwhile Cr Price nominated herself. But no-one seconded her self-nomination.

Then Cr Melky put up his hand to second Cr Cocking and the deed was done.

Cr Cocking’s appointment as Deputy Mayor will be revisited at the end of September.