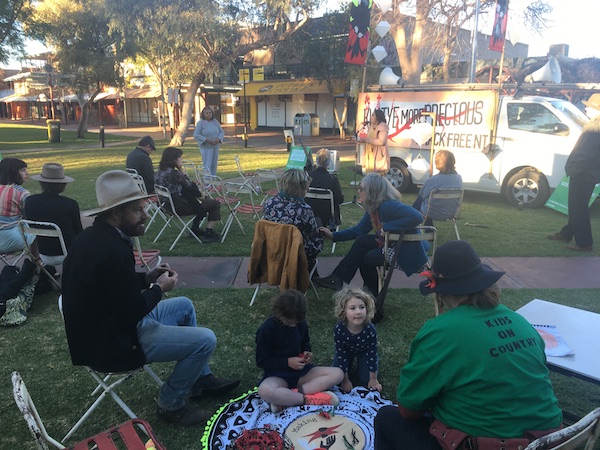 A total ban of fracking and comprehensive initiatives for dealing with troublesome children are key planks in the Greens’ platform who are standing three candidates in The Centre.

Peltherre Chris Tomlins, an Arrernte Elder and human rights activist, is joining the crowded field of candidates in Braitling.

Bernard Hickey, Psychiatrist with 20 years professional service in the Territory, is the candidate for Araluen.

A small crowd at the community launch on the Flynn Church lawns on Friday night gave a full-throated “Ban fracking, ban fracking” when they learned that Chief Minister Michael Gunner was in a coffee shop nearby.

The Green inclusions (who the party says were already public knowledge) brings the total of candidates in the seats to five in Araluen, seven in Braitling and four in Namatjira.

A crowded field to join late? However, they are running on the two issues that seem to cut through most: kids on the streets and fracking.

The party fairly refers to these issues with policies they see as solutions: “Kids on Country” and “Ban Fracking”.

When asked about what can be done about a small but troublesome group of kids committing crimes around towns, Mr Tomlins was resolute in his objection of a curfew.

“I do not support the use of a curfew. This will mean more kids in custody and more institutionalisation. “

Rather than a hard on crime approach, Mr Tomlins says that “reconnecting the kids back on country to their family and culture,” is the best way forward.

“This gets them off the streets of Alice Springs where they are causing trouble.”

Mr Tomlins also supports giving kids a 24-hour place of refuge, a version of policy put forward by a number of parties.

While working on the Bonnet Series, (a combination of cleaning up country and creating art through two-way learning between Aboriginal and non-Aboriginal Territorians), Mr Tomlins says he has seen the community support for this type of strategy.

“We have already had many in the Alice Springs community amd business wanting to help.

“We now need a way so they can help, volunteering to share their skills and upskill our kids. This is what we see as self-determination in practice. We strengthen Alice Springs’ community by strengthening communities, out on country.”

When a criminal trial must take place, Mr Tomlins says he is in favour of restorative justice that deals with a multitude of relationships.

“The Remote Indigenous Parenting Association (RIPA) have had a number of very successful trials where they deal with problem kids in the context of relationships not just to the law but to their family, to the community, to the victims of crime. Peace should be at the centre of this mediating role,” says Mr Tomlins.

In a joint statement, Ms McCoy and Dr Hickey say that support must be increased all around the community, especially for children and families, but also for the police.

“Police should support this in a facilitator role as per restorative policing practices, making police part of the therapy process. Police will need training in trauma informed care, unconscious bias training, history of colonisation in Alice Springs.”

On his Greens profile, Mr Tomlins echoes that sentiment.

“To have a safe and vibrant community, everyone has to make a change. The police are no different and have to play a part in setting a good example with community values that are equal for everyone.”

Official Greens policy on the subject aims the highest of any in the Territory — raise the age of criminality to 14 and have zero children in detention by 2030. They aim to achieve this through First Nations led efforts.

On the fracking front, the Greens are on script.

Mr Tomlins: “The NT and Australian Greens policy is total ban on fracking. That’s all fracking. This is the only way to have long term protection of water.”

Ms McCoy and Dr Hickey say this should be done through “sound ecological management, reversing carbon pollution [and] stopping fracking and other activities that do not care for water security”.

Mr Tomlins says that “solar is the obvious solution for the Territory.” And that “may need government subsidies.”

On other Central Australian issues, such as tourism and the dwindling economy, the Greens believe capitalising on the unique cultures of The Centre is key.

“The town centre needs to be revitalised through culture and arts and rent adjustments to assist new and inventive start-up ventures,” say Ms McCoy and Dr Hickey.

“Tourism old and new needs to be made restorative, non-invasive culturally and environmentally.

“Aboriginal cultural tourism is scant. A huge effort involving and led by Aboriginal Custodians could be developed.”

They also suggest that moving towards sustainability in all aspects of life will be essential to getting the economy, tourism and otherwise, on the right track.

“Entrepreneurship needs to be encouraged at all levels, especially locally, including micro businesses, especially in a COVID world, leading to sustainable, widespread and resilient self-sustaining economy that is resistant to downturns due to its variety.”

On a broader, Territory wide scale, when asked about how the NT should go about getting back to a per capita debt comparable to other states and the ACT, Mr Tomlins has a question of his own.

“What I would like to know is, with such a small population and many of us especially, Indigenous people basically in poverty, how is it possible the Territory can be in such debt. Where did the money go?”

For Alice Springs and the Centre, Mr Tomlins says that community is the answer.

“We already have programs like the Bonnet series which was an entrepreneur initiative of the northern Arrernte communities where we have brought artists and technology into communities to share their skills with us and we share our culture and country. We can provide jobs for Alice Springs people and the kids now on the streets, but we think we can do this best as community exchange.”

Find more about the interview with the Greens HERE.

ERROR: Nikki McCoy, Arts Therapist, is not employed in NT prisons, she works there as a volunteer.