A room, a river, an island, a view 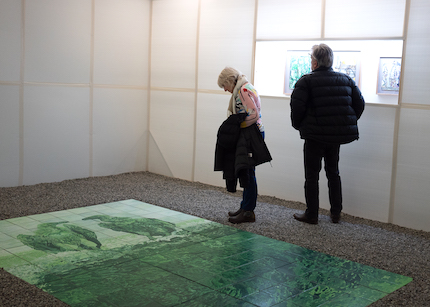 Just as I came in from my viewing of Gabriel Curtin’s show – the first ‘in real life’ at Watch This Space since March – a man on television was talking about a Japanese garden designer who did not usually feature actual water in his gardens but rather represented water with gravel or sand.

In my ears still was the satisfying sound of gravel crunching underfoot, and not just the sound but the connection between the sound and the weight of my body as I stepped around a small parcel of ‘river’ inside a translucent white room.

The river association had been there, offered by Curtin’s poetic title for his installation, A river and a voice shouting above it (borrowed, it turns out, from Hungarian writer Laszlo Krasznahorkai; we’re all always borrowing, as Curtin acknowledges in his artist’s statement). For me, the river association filled out now with this idea of gravel water in a garden.

I’d first responded to the sound as a way of amplifying – through engaging my aural sense – the alluring visual engagement of objects in the room, showing what we more conventionally receive as made by the hand of the artist – hand-drawn and painted marks.

Now I bring to mind the ‘island’ in the centre of this river of gravel – an island that represents water inside a representation of water.

If it’s an island though it will soon be swallowed in its own inundation – a roiling sea of green, a tsunami, ridden by two vultures, seemingly absorbed in conversation. Will they at any moment realise their impossible position and take off?

Are theirs the voice(s) shouting above the river of Curtin’s title? Oblivious to their predicament? Or is it our voice(s), oblivious to ours? 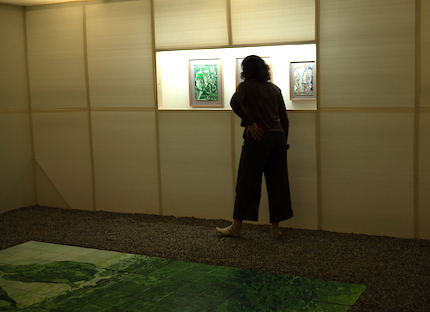 Small beautiful ‘worlds’ peep out from a recess cut into the translucent white room (an immaculate construction from corflute). The recess frames them and then they are framed again. Curtin is being insistent, but why?

It’s about prompting the viewer to perceive, and reflect on, the process at work here, on the making, the viewing, the valuing (the precious art objects, their creator). All of this is inter-connected and shapes the ideas and emotions that the work activates.

I experienced a sense of longing for lost worlds, for lost innocence which we now have to recognise as not innocence at all, but as complicity (at best). Curtin achieves this by making use of a European bourgeois aesthetic – the elegantly tiled floor, the small framed precious art works – and setting it in play with his imagery.

Vultures are in our language as metaphors for rapacious greed; tsunamis, as metaphors for uncontrollable forces that sweep all before them. Before the Coronavirus pandemic the allusion would surely have been to the dominant economy, heedless to the threat of climate change.

The pandemic – which postponed this show from April till now – complicates that, layers into and on top of it. As it progresses we see ever more clearly the inequalities of its impact; that the way we have organised our economies and communities offer it deadly opportunities among the most disadvantaged, many of whom prop up the advantage of the rest of us.

Those vultures, that tsunami, those lost worlds.

Above: Opening night audience experience A river and a voice shouting above it. Below: Gabriel Curtin on the microphone. Photos by Mimi Catterns, courtesy Watch This Space. Curtin’s thoughtful artist’s statement is available at the gallery. 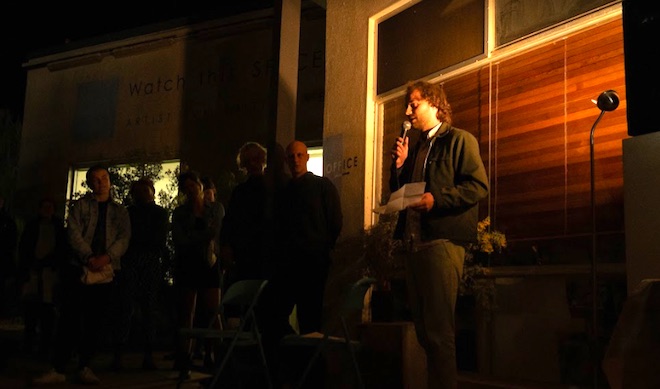 Shows at Watch This Space until July 26.