The militarised centre of Australia

I can remember the naive excitement with which I ventured up the Stuart Highway for the first time more than thirty years ago, into the big landscape, the tiny rough-edged communities, the sense I had of openness and possibilities.

The Northern Territory and South Australia trade on that allure. It is at the heart of the NT’s appeal to tourists and of its current population strategy (encapsulated as “Boundless Possible”).

Now I feel the weight of the creeping expansion of a militarised swathe running south to north right through the centre of Australia.

My grasp of it may not be comprehensive, but here goes:

Starting from RAAF Base Edinburgh and Technology Park in the north of Adelaide – even before the latest announcements both subject to massive new investment by the Commonwealth, Lockheed Martin, Raytheon, BAE Systems, and SAAB. 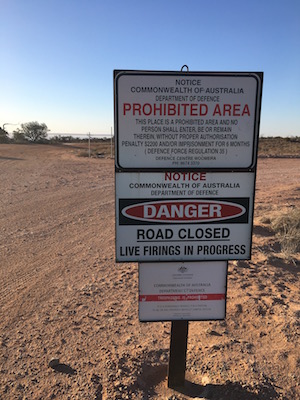 Up through the Woomera Prohibited Area (WPA), stretching from Woomera to just shy of Coober Pedy on the eastern side of the highway, as far north as Cadney Park on the western side, more than 100,000 square kilometres of land.

I’d driven this route for years, noticed the warning signs by the side of the road and thought of them as a chilling relic of the British nuclear tests at Maralinga. Not at all. Drive off the road to make camp and you soon come to other signs (pictured): “Danger. Road Closed. Live firings in progress.”

After a decline in the 1980s and ’90s, the WPA resumed its role as an active weapons testing range, the largest in the world, ideal for its remoteness and “quiet electromagnetic environment”. Parts of it are in near constant Defence use and the Australian taxpayer is pouring close to a billion dollars into its upgrade.

Onwards to Alice Springs, with Pine Gap military base just to the south of town, also going through a “midlife upgrade” for an unquantified spend. There’s also the Jindalee Operational Radar Network (JORN), part of it to the north-west; the whole network is getting a $1.2 billion upgrade.

Heading north, to where some of the recently announced further billions will be spent, there are RAAF bases in Tindal and Darwin, barracks in Palmerston and Darwin, training areas at Kangaroo Flats, Robertson Barracks, Mount Bundey and Bradshaw Field. All of them are receiving new infrastructure investment worth some $2 billion, with the US contributing a fraction of that, supporting the US Force Posture Initiative.

There’s also  the Australian Signals Directorate facility at Shoal Bay not far from Darwin, and a possible new deep-water port development a little further out, offering an improved base for the regular “rotations” of US Marines and their deployment into the Indo-Pacific. 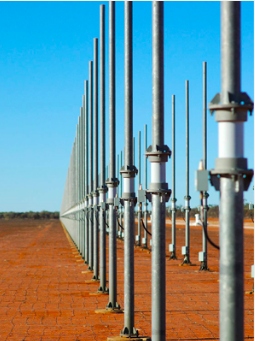 The language used to talk to the public about all this is expressed in terms of industry, jobs, investment, billions of dollars. Dig down and in the small local economies that host these facilities the billions shrink – to just a few million, for example, with the JORN upgrade, mostly going on fleeting work for local tradies (see update at bottom here), not to developing a sustained and skilled local workforce.

The Prime Minister, talking to the massive new defence investments, evoked a dangerous new world out there. Meanwhile the ever more militarised Territory is certainly more dangerous as a result of these moves – becoming an increasingly effective military target should hostilities break out.

Are civil defence plans being developed? If they exist, the public knows nothing of them.

This is not  a fanciful consideration. During the 1970s and ‘80s, when the Soviet Union was the threat, it was accepted in intelligence circles that the joint facilities including Pine Gap would be likely targets in a nuclear war.

Paul Dibb, a senior policymaker and intelligence officer at the time and later emeritus professor of strategic studies at the ANU, wrote* in 2018 that it was “remiss, to say the least, of successive Australian governments not to provide even the most basic civil defence measures against nuclear attack on those facilities – despite the fact that they were advised to do so”.

Meanwhile in the public announcements and comments on the new military spending, whether in the NT or nationally, there is never a mention of the fundamental premise of this industry, which is violence and threat as the way to conduct human affairs.

The same goes inside the expert circles that work to shore up the industry.

I’m not an expert but as I began to inform myself in this area, so that I could talk about our neighbourhood military base with some degree of understanding, I started reading in the military sector.

There I found a world picture almost unrecognisable to me.

An article about military logistics by an Australian commanding officer led me to a 2018 paper by the US Joint Chiefs of Staff that advances a new intellectual framework for what they do. The Chiefs argue that the “peace/war binary” is obsolete. Instead they want to see military and civil activities aligned along a “continuum of cooperation, competition below armed conflict, and armed conflict”.

The campaign is worldwide, continuous into the foreseeable future and framed entirely to project US power. The Chiefs seek to maintain the existing international order that has been challenged by “emerging and resurgent global powers, aspiring regional hegemons, and non-state actors” competing with the US.

Nowhere, though, in the document’s forty or so pages is there a vision for, or even any reference to, striving for “friendly relations among nations based on respect for the principle of equal rights and self-determination of peoples”, as put in the United Nations Charter to which both our nations are signatories.

We don’t hear that from our Australian political and military leaders either, but I expect many Australians would be as perturbed as I am by the unvarnished insight the Chiefs provide into the thinking of our powerful ally.

This is not the future: this “forever war” is happening now, and Australia, through its government and military, is embracing it despite little awareness of this in the general community. 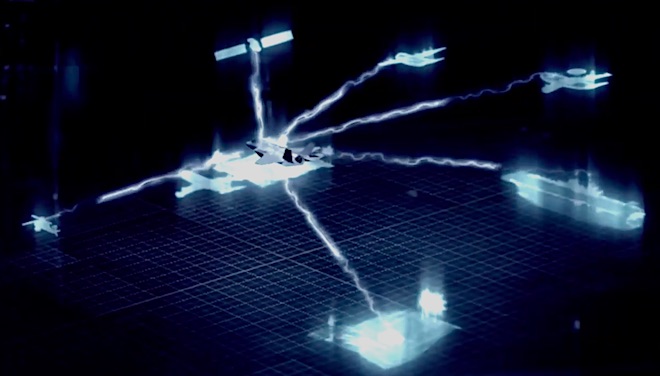 The RAAF is transitioning into “a formidable networked force capable of delivery air power effects [read bombs] for the integrated force”: Air Marshal Mel Hupfeld. Graphic from his address to the 2020 RAAF Air Power Conference.

It’s what we are buying into with our commitment to “interoperability” with the United States armed forces. Its language was clearly reflected, for example, in this year’s RAAF Air Power Conference.

In his introductory speech Air Marshal Mel Hupfeld spoke of Australia now being in an “environment of constant competition”. In response to this, “[w]e need to demonstrate national power across a broader spectrum – from influence and competition to counterinfluence and conflict …

“We need to recalibrate our thinking so that air and space power, as part of the joint force, is a tool of national power that is constantly operating. Not simply at the ready in case of outright conflict, but deployed in some form, all the time.”

This thinking was already on display in the 2018 conference, on the theme of air power in “a disruptive world”, when we were being urged to think of artificial intelligence as our “intellectual partner” in order to accelerate the decision cycle – to be able to make best use of the vast amount of data which Pine Gap and its network suck up.

Digital natives, growing up with Xbox games and the like, “need to run the show”. Trust needs to be built, not in one another, but in AI.

We were told Russia has declared that AI is the future and that “whoever becomes the leader in this sphere will become the ruler of the world”. China is unambiguous about its AI plans and already has the advantage of military–civil fusion; when “our adversaries” are going down this path our ethics could be the ‘”handcuffs” holding us back.

Another speaker, referring to the “grey area” of lethal force short of outright conflict, asked whether hybrid warfare could be used for good. But what good, whose good? He didn’t go there.

I couldn’t find any sustained reflection in the presentations about the resort to lethal force, the grave weight it is due, the ethical challenges of this brave new world, described as disruptive but accepted, it seems, as prescriptive – entirely inevitable. 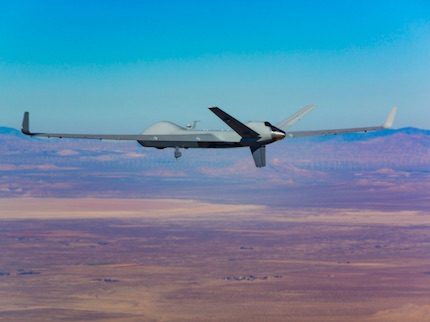 The PowerPoints were all shiny imagery of high-tech kill chains, but not a dead body to be seen, nor devastated city, nor vast refugee camp.

It seems we are going headlong into this intensively militarised world, with an ever-ready prospect of rapid resort to lethal force on many fronts – including of the kind delivered by our soon-to-be-acquired armed drones, the MQ-9B SkyGuardian (right, General Atomics image).

This drone is not much different from the MQ-9A Reaper that took out Iranian military leader Qassem Soleimani, an assassination recently deemed illegal by the UN special rapporteur on extrajudicial, summary or arbitrary executions.

The United States invoked self-defence as justification for an attack, the first time a country had done so for a lethal attack against another state actor in a third country.

“Major General Soleimani was in charge of Iran military strategy, and actions, in Syria and Iraq. But absent an actual imminent threat to life, the course of action taken by the US was unlawful,” the Special Rapporteur has concluded.

These kind of attacks rely on the intelligence collected by Pine Gap and the network it is part of.

This is happening in our backyard – our wide open spaces that we are so fond of evoking hide some nasty truths.

*Paul Dibb, Inside the wilderness of mirrors: Australia and the threat from the Soviet Union in the Cold War and Russia today, MUP, 2018.

Note: I discuss these issues at more length in my book Peace Crimes: Pine Gap, national security and dissent, launching here in Alice Springs on Saturday 1 August, 10.30 for 11 am.  Speakers and venue to be advised. Copies will be sold at the launch by Red Kangaroo Books and it will be available in all good bookshops by August 4.