‘Major Project’ is ready to go – except for the money 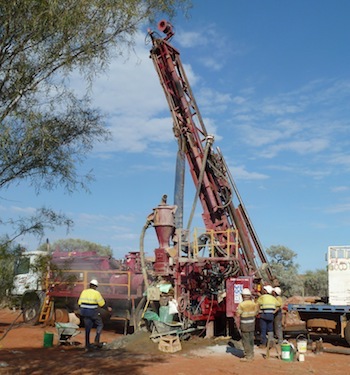 Chief Minister Michael Gunner has conferred Major Project Status on a mining venture that has as yet no assured source of development capital.

Executive Chairman Mick Billing, of the Adelaide based Thor Mining PLC, says the tungsten mine, which goes back to mining and trucking pioneer Kurt Johannsen in the 1970s, will require $43m and as yet no funds are locked in.

But Mr Gunner says: “In another sign of private investor confidence in the Northern Territory’s economic recovery, global mining company Thor Mining will establish an open pit mine near Alice Springs.”

In fact the proposed mine at Molihil near Jervois, is 220 kms north-east of the town.

“This project is a jobs jackpot for Central Australia,” says Mr Gunner, “expected to create nearly 100 local jobs – 59 ongoing local jobs in Alice Springs over the seven year projected mine life, and a further 40 jobs during construction.”

He puts the “estimated capital expenditure” at $69.3m which is $27m above the figure quoted by Mr Billing.

Mr Billing says he is pleased about the Major Project Status for the project, which he expects will “facilitate a whole bunch of government approvals under one banner, as a one-stop shop.

“In our case we have most of these approvals, so that’s not a particular issue for us, but as you go through the construction development process there will  be some approvals required, and this will help that.”

He expects it will also assist the project to obtain investment and/or interest in a joint venture.

“It will be helpful to have that status for that purpose,” says Mr Billing.

“Having a statement from the NT Chief Minister that this project is considered important by the NT Government is very positive.”

Mr Billing says he is in the process of raising finance, creating joint venture arrangements and/or obtaining loan finance from banks.

He says none of the the project is locked in yet: “We’ve had offers from several parties for amounts that would contribute.

“But if you lock those in you make yourself ineligible for larger portions of funding from people who are prepared to do the lump.

“It’s not a matter of saying, well, this month we’ll try and get a couple of million and in the next quarter we’ll get another four or five million.

“You try and do it in one big package. We have a number of sources we are working with. If someone comes in on a joint venture he would do the lion’s share of the funding, if not all of it.

What point along the fund-raising way has the company reached?

“I’m not prepared to say that. That’s commercially sensitive.”

Local front bencher Dale Wakefield commented in a media release: “We are on a jobs led recovery, not a cuts led recovery.”

And Mr Gunner says: “The Territory Labor Government will always put jobs ahead of cuts,” a sure sign that a new spin is under way.

Central Australian frontbencher Dale Wakefield, when asked by the Alice Springs News, said the Major Project Status was conferred because of the development work on the mine for several years and extensive exploration.

“They have shown an important resource is there that is in demand around the world.

“It’s important for governments to back private businesses [making sure we] work as effectively to get the outcomes for Territorians which is jobs.”

NEWS: Are they getting any special treatment?

WAKEFIELD: No, there is no special treatment, it’s about us working with companies with a project that has been developed to a certain level.

NEWS: The bureaucracy will not treat them differently to anyone else? They are not getting shortcuts?

WAKEFIELD: There are not shortcuts through our processes.

She said capital raising is clearly an issue. International capital markets highly volatile due to COVIT-19.

The government is “providing support for them and backing in those capital markets by providing the Major Projects Status”.

NEWS: Is the government putting any money into that project?

WAKEFIELD: Not that I am aware of.