Home Issue 25 Library ban: where will all the young ones go?
Issue 25Issue 26Volume 25

Library ban: where will all the young ones go?

Alice Springs Public Library, in its “Stage 3” reopening phase since 9 June, is a pale imitation of its former self.

I dropped in to borrow a book one day last week after school hours. I saw three children with parents, one accompanied youth, a handful at most of other patrons.

There are obviously busier moments, with visitation averaging out in Stage 2 at 190 customers per weekday, 90 on the shorter weekend days. A far cry form the pre-Covid average of some 600 a day and the January record of 788 visits per day. 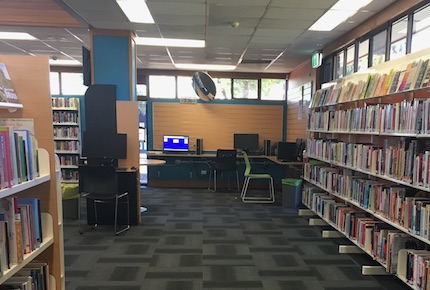 Part of the current unaccustomed quiet is due to unaccompanied teens (U15) not being allowed in – extending what was previously a policy limited to school hours (introduced in late February).

The ban will remain in place until the council’s Youth Hub is up and running.

Their exclusion when the library reopened was initially framed as a Covid-19 response.

Now, CEO Robert Jennings says they will have to wait until they can be offered a choice: “higher energy activities” at the Youth Hub, quieter activities at the library.

He says council has been trying to find “an interim solution” but hasn’t found one yet.

The library has worked hard, in collaboration with other agencies, to cater for this group of patrons and Mr Jennings acknowledges that some ground will be lost.

“But we will rebuild those relationships,” he says, “and do something really great for all youth.”

The Youth Hub, in the Meeting Place behind Adelaide House, was due to open in April, but the Covid shutdown delayed that. It could possibly open in the coming month but a firm date has not yet been fixed.

Anecdotally, the overwhelming majority of youth in U15 age group going to the library are Aboriginal.

Pat Ansell Dodds, one of the Arrernte Strong Grandmothers Group and an artist, has worked with them in the library on designs for gobo lighting, lantern lights and t-shirts, some of which will feature in this year’s Parrtjima Festival. 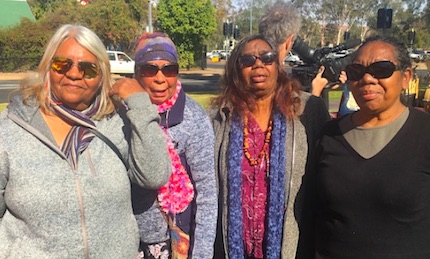 She is concerned to hear of them being excluded: “Kids can learn a lot of things going to library instead of walking around the streets and stuff. They’ve been banned from so many places in Alice Springs over the years. It’s not right.”

President of the grandmothers’ group, Sabella Turner, is more accepting of both council’s concern with Covid-19 protocols and with young people having to wait for the Youth Hub “so they don’t have to go into the library”. But she is very keen to see activities for them: “There’s nothing for them in this town … we all need to pool in, look after these kids.”

Blair McFarland, of the Central Australian Youth Link-Up Service, a division of Tangentyere Council, accepts that being turned away will be a negative experience but it’s temporary and he can see why council has made the decision, Covid or no Covid.

Over the last two years he says the library, with their open door policy, have demonstrated the need, always lobbied for by youth services, for young people to have “somewhere safe and interesting to go during the day”.

CAYLUS has been closely involved, from partnering with the library to run the Geek in Residence program (digital activities for youth, which started in 2017) to providing pie vouchers for the many who turned up hungry at the library.

Effectively the library has become a de facto youth centre – “a very kind and generous thing that council provided there, but it was never going to be a good fit”.

He commends the library for being “miles ahead” of other NT libraries in their inclusivity and it still is that place, he says, noting its many Aboriginal users in other age groups.

The issue is, “young people are young, they can be noisy, it’s a really different dynamic”: “You can’t run a youth program in a library – it’s like running a football game in a library.” 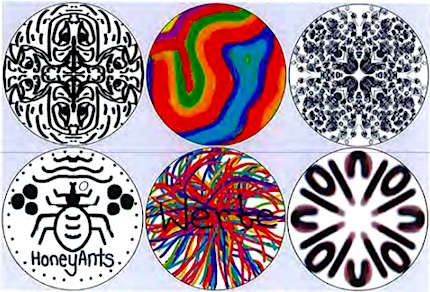 “It would be different if there was a whole separate zone and other users could enjoy the peace and quiet they want.”

Some of the gobo light and t-shirt logos designs made by youth at the library. Source: council report.

In the library’s survey of users – drawing 180 responses over seven weeks in August-September last year (though only one from the 13-18 years age group) – negative comments about “customer behaviour” towered over all other comments.

“Cleanliness/smell” and “noise” attracted the next most negative comments.  “Inclusivity” registered in the positive comments, on a par with appreciation of the library’s collections.

Library manager Clare Fisher commented in her report to council: “The survey highlights the important positive social impact that the Library has in Alice Springs to a wide range of users as well as gives greater clarity to library management regarding the opinions of library users on the current programs and services being run.

“The pressure that the library currently experiences as a result of high numbers of youth visitation is also evident in the survey feedback.”

Mr McFarland sees council’s solution as positive and welcome, with the library offering its youth space for young people to “sit down, play by the library rules”, and the Youth Hub as an attractive alternative. (This is also a recommendation of the recent Strategic Review of the library by consultant Roger Henshaw).

Meanwhile, Mr McFarland (at left) says CAYLUS are trying to persuade council to open the Youth Hub earlier. At present, the plan is for a 2-6pm opening on weekdays, 10am-1pm on Saturdays. The Gap Youth Centre also opens at 2pm, but before then there is nowhere for young people to go.

And it’s not as simple as saying they should be in school, he argues.

Large numbers of the youth concerned come from remote communities. Ms Fisher told council in December that the library “has been significantly impacted by the inflow of community members into town. An unfortunate result of this is that we have seen an increase in anti-social behaviour by specific young people in and around the library location.

“Term 4 disengagement from school appears to be playing a major role in the large numbers of young people we are witnessing in the space.”

Mr McFarland agrees: even if youth are going to school out bush, when they come to town “they don’t have the background” to attend school; instead they “rattle around” with nothing to do.

It is also the case that initiated young men often won’t go to school, feeling that it is not the right place for them anymore, but they will do things on computers in the learning centres that cater for post-school education.

There they experience “less shame and failure” on the one hand, and gain structure and skills development on the other, which will help them to “interact with the whitefella system”.

There are examples where these attendances at learning centres are counted as “Code O” school attendances, which allows schools in those communities to maintain their enrolment numbers and the related funding levels.

This is a model that CAYLUS and other youth service providers would like to see adopted more broadly – the Education Department being more flexible in the way it provides services to young people.

“We want to explore how the department can work with youth programs, count attendances in our activities and throw in some resources for them.”

That would respond to the reality on the ground, argues Mr McFarland, where Aboriginal students have long been voting with their feet.

In Term 3 last year average NT Aboriginal attendance in Year 9 was 55.6%; in Year 12, 62%. These figures compare with non-Aboriginal attendance rates of 86.4% and 80.6% respectively. In the Alice Springs region the figures (averages for middle years, and senior years) were not starkly different.

“You don’t have to force kids to go to your programs, put resources where the kids are. All praise to the library for stepping into that mix and not slamming the door three years ago. It became a success, but it never was going to be a long term solution,” says Mr McFarland.